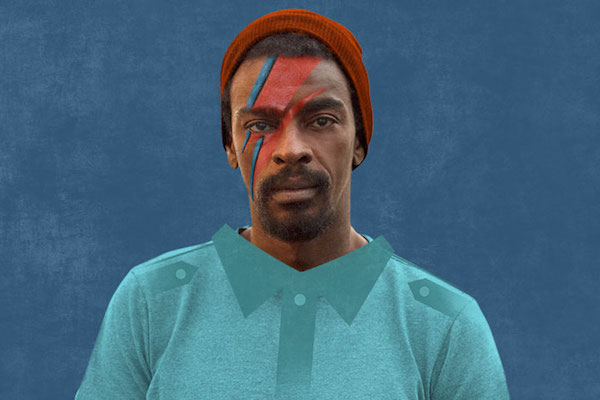 Seu Jorge entrances with Bowie tribute at The Pageant, September 12, 2017

I'd had "Life on Mars" rolling through my head all day. I found myself humming it in the shower, while packing my lunch, as I walked to my car, standing in line outside the Pageant in a light drizzle -- any time my mind had the space to relax a bit, the song revealed itself. For months, I'd been looking forward to A) seeing Seu Jorge and B) seeing him play a set of Bowie songs. These two events seemed equally unlikely -- that the legendary Brazilian musician and actor would grace our fair city and tour this body of work specifically. Apparently my subconscious could no longer contain its excitement.

Seu Jorge admittedly was no Bowie superfan to begin. He knew of only two songs -- "I'm Afraid of Americans" and "Let's Dance," thanks to "my man" Niles Rodgers. He confessed: "I am a black man from Brazil. We don't listen to rock 'n' roll." But Wes Anderson had a vision, and Seu Jorge learned quickly to reimagine the unfamiliar sound with a samba flair -- a breezy, relaxed, casual sound that turns the obstinate "Changes" into something more resigned, more que-sera-sera, and depicts most tracks as a folksier, more Hunky Dory version of their former selves. Fitting, then, the black-light blue stage lights that initially cast him as a shadowy silhouette quickly switched with the opening chords to "Ziggy Stardust" to reveal a seaside setting, complete with wooden crates, netting, lanterns, and tea lights, his face now glowing from below, a spotlight beaming an oceanic full moon on the curtain behind him.

For me, the strumming singer/songwriter genre is unfamiliar territory. With few exceptions, I generally gravitate towards guitar with plenty of fuzz, reverb, and attitude, where incoherent vocals are as good as another instrumental track, an occasional line of lyrics peeking through. Even then, it's safe to assume that I'm making up the words I want to hear. For the longest time, I swore Johnny Yen in "Lust for Life" was doing another striptease to "Luther Vand-ross / and the Sex Machine." Seemed reasonable enough to me...

So while acoustic and lyrics-centered is not my normal scene, the familiar sounds of Bowie tunes I know so well, the lyrics now indecipherable to my English-speaking ear, center all the attention on Seu Jorge's incredibly expressive voice, ranging from deep Barry White bass-baritone to soprano accents, alternately drawing richness and weight from some invisible well at the back of his throat or hueing his high notes with rasp and buoyancy. His gripping take on "Rock 'n' Roll Suicide" opened with mind-bogglingly low notes (think Caiaphas in Jesus Christ Superstar) and concluded with a bright, warm refrain of 'Wonderful!/Give me your hands!'

When he finally played "Life on Mars," he dedicated it to Bowie as well as his own father, who we learned passed away three days after Bowie. As he played the quintessential anthem of disillusionment and existential wonder, a single piece of confetti slowly flitted down from the rafters, a remnant of some magical evening past, illuminated for a fleeting moment as it passed through a sharp beam of stage light. It was the perfect tribute to our beloved Earthling and all others who have departed this world for unknown dimensions. And this timeline offered some insight as to why, thirteen years after The Life Aquatic with Steve Zissou was released, Seu Jorge is touring his Bowie-rendered, Portuguese contributions to the brilliant soundtrack. After the passing of these two monumental figures in his life, he felt compelled to pay tribute in the most appropriate way he knew: strumming away in his Team Zissou track suit and red beanie on what director Wes Anderson saw as the "classics".

As he walked offstage at the end of the set, there was little wonder whether there would be an encore, as a video screen branded with the SANYO logo slowly unfurled. The screen eventually displayed snippets from the film, interspersed with Bowie's smoldering bi-colored stare. We were treated to another round of "Rebel Rebel" and what Seu Jorge informed us was his favorite -- a moving, heart-wrenching performance of "Quicksand." I found myself with a new tune stuck in my head for days to come, my subconscious seemingly satisfied and holding onto that magical evening.