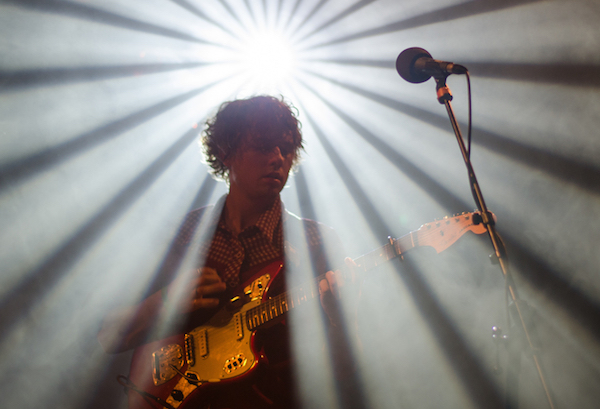 A Lesson in Human Nature: Kevin Morby at Off Broadway

Picture this: it is the tail end of Kevin Morby's show at Off Broadway on a cool Wendesday night. After treating the audience to the full Morby experience, from raucous guitar riffs to pensive ballads, Morby is starting his final solo, "Beautiful Strangers," a quiet, emotional meditation on the 2015 Paris terror attack, the Pulse Nightclub shooting, and the death of Freddie Gray. It is a song, in short, about love in the face of chaos and adversity.

At this point, three beefy-looking guys start taunting a drunk man who is enjoying the music a little too enthusiastically. Another man standing nearby, who is with his girlfriend and mother, tells the hecklers to shut up. The hecklers leap up in a rage. "What the [bleep] did you just say to me?" one of them says, swaggering antagonizingly and shoving the man. The man's girlfriend tries to step in and gets shoved, too, and the heckler is swiftly kicked out of the venue. (Keep in mind this is all going on while Kevin Morby stands onstage, singing.) The two remaining meatheads start cursing out the man's mother -- a little old lady whose expression betrays less anger and more plain shock -- and blaming her for starting the fight. The trio tries to ignore the abuse, but it proves to be too much, and they leave before Morby reaches the encore.

You can't make up this kind of irony, folks. What a perverse world we live in, where you can cuss out someone's mother and somehow still feel entitled to hear a song about rediscovering love and beauty in the world (as Morby does on "Dorothy," the final song of the night). I don't think I will ever forget that scene: two hulking dudes spewing obscenities at a little old lady as Kevin Morby sings sweetly in the background, "Carry onward like some songbird, beautiful stranger."

In spite of the unnecessary drama, the night's performance is definitely one that inspires good vibes (or, at least, it ought to). In a blue denim jacket emblazoned with white music notes, Kevin Morby encapsulates the flair of every self-respecting rock-n-roller. As cliché as it sounds, he is rather hard to define; his songwriting is introspective and crafted with poetic care, evidence of his folksier sensibilities, but his sound is surprisingly assertive, almost Dylan-esque in its classic rock flavors. Morby's latest record, City Music, stands out for its raucousness in comparison to earlier releases. The title track demonstrates a mathy knack for guitar rhythms and harmonies; live, this translates into a dazzling jam session complete with daring tempo changes and a few well-deserved head bangs from Morby and backing guitarist Meg Duffy. "1234" may well be the closest he will ever get to writing a dance number, with a near frantic pace that all but forces you to get on your feet. Even "Crybaby," with its depressingly frank lyrics ("I never was someone that I liked/ I never was someone that you know/ Now the tears pull through my eyes/ And the trouble fell like a snow"), somehow becomes cathartic when heard through the roar of Morby's guitar-work.

On a more subdued note, Kevin Morby also revisits old hits like "Parade" from 2014's Still Life, which captures the poignancy of death in a slow, jangly piano ballad à la Billy Joel's "Piano Man." During these songs, the talent behind Morby's songwriting shines; he has a way of appealing to something very time-honored in his writing, as he evokes the well-worn images of winding rivers and smoky nights that define the 'American gothic.' The last verse of "Harlem River" might've been taken straight from a Springsteen song: "And ride on that easy rider/ Flow like that Harlem River."

"Beautiful Strangers" would have been the perfect conclusion, especially given the tumultuous times in which we, as a collective race, stand. But instead, it becomes a demonstration of the hypocrisy of mankind; we're more than willing to listen to a song about people who have died at the hands of hate and nod our heads as if we understand, but we'll go and beat the crap out of the first person that crosses us. There's a huge problem here, and, frankly, it's a disturbing one -- I just wish that listening to Kevin Morby would be enough to solve it.