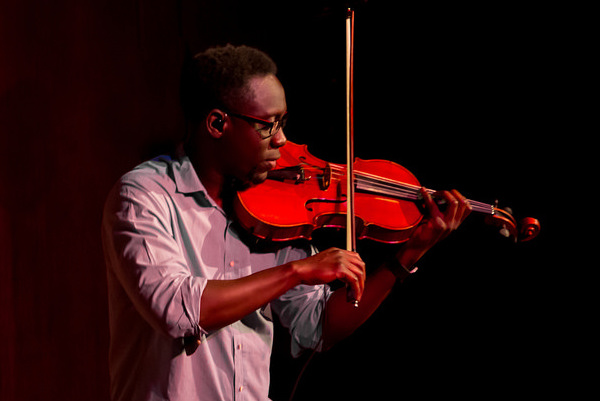 Black Violin pluck the crowd from their seats at The Sheldon

Black Violin blends a diversity of styles into their songs, creating a harmony not only in their music but within the people that share the experience of a Black Violin show. On Sunday night, they brought that experience to the Sheldon Concert Hall & Art Galleries.

On a relatively quiet night in Grand Center, everybody on the street seemed to be headed to the Sheldon. Shared glances revealed a mutual state of joyous anticipation, eager to experience Black Violin, the combination of Kevin Sylvester and Wilner Baptiste. Sylvester performs under the name Kev Marcus and totes a Yamaha SV-250 electric violin, an instrument that personifies the modern approach the duo brings to the stage. For more than two decades, he's been accompanied by Baptiste, who is better known as Wil B and is joined by "Tiffany," a more classically designed viola that has lead his career since childhood. Together, they blend classical strings into the world of modern hip hop, R&B and soul in a musical event that captivated fans of all generations and walks of life at the Sheldon on Sunday.

The show opened with DJ SPS and drummer Natt Stokes providing the rhythms for Kev Marcus and Wil B to take the stage in a grand fashion. After establishing the tone of the night with a musical introduction, Kev Marcus took to the microphone to address the crowd. "This is a party," he exclaimed, assuring the already entranced audience that they were free to leave their seats and dance as they pleased. This set the tone for much of the early set where both violin and viola offered a display of skill and style. Each solo was complemented by complex harmonies and Kev Marcus reclaimed the microphone at times to add some hype and rhymes of his own.

More than just a party, as the set progressed, the sounds broadened and incorporated wider range of influences. The mood changed when the drums and DJ withdrew, spotlighting Wil B and Kev Marcus on plucked strings. Even without the back line, the rhythm was lively and inspired the crowd to clap along until Natt Stokes rejoined on the drums. In a segment as soulful as it was comical, Wil B introduced "Tiffany" to the crowd and proceeded to serenade his viola with a medley of soul songs, including Marvin Gaye's "Let's Get It On," as he plucked the strings with rhythmic chord progressions in a guitar like role. He relinquished the spotlight and Kev Marcus soon took to illustrating the benefits of an electric violin, incorporating a selection of effects to his tone with some augmenting pedals as he played.

Wil B's serenade wasn't the only instance where Black Violin broke from their three albums of original material to indulge in a medley of covers. Backed by DJ SPS's combination of vocal tracks and masterful performance on the decks, the band brought the crowd to their feet with a selection of hip-hop and funk favorites. With the room at near peak energy, they seamlessly shifted from the familiar to the opposite with a fully improvised segment. The diversity of personalities on stage mingled together into a wild groove, with highlights coming from Kev Marcus's melodic distortions, Wil B's rhythmic phrases, Natt Stokes' string of breaks and fills, and DJ SPS's scratch solo featuring spoken samples saying "Thank you" and the crowd pleasing "St. Louis."

Even though he was literally kept behind glass, Natt Stokes was never anything but a driving force on stage from the drums. With a set that offered deep, full sounding drums beneath a canopy of six cymbals of various designs and augmentations, he featured many frenzied break rhythms, tirelessly delivered throughout the night. In additional to Stokes' musical contribution, the placement of his drums in the recessed segment at the back of the stage incidentally offered a visual element as the bright lights created a pool of dancing reflections on the walls and ceiling with each strike of the cymbals.

As the set neared it's end, Black Violin demonstrated how they "put the stank on it," as Kev Marcus described it, mixing classical styles with their modern flavor, including crowd favorites like "Shaker" and a segment where DJ SPS blended a medley of remixed classical standards. They continued with "Invisible," a track that featured lyricist Pharoahe Monch on the album Stereotypes, and included his verse via the DJ mix. The final two selections were "Addiction" and "Magic," where Wil B laid down the viola to sit behind a keyboard and offer some more melodic vocals. The finale increased the energy with a continuously building groove, filling the aisles with dancers and keeping the shaking the floor with a unified bounce. At its conclusion, Black Violin left the stage to a DJ SPS selected track and a standing ovation.

Without much hesitation and even less surprise, Natt Stokes returned to the stage and promptly encouraged the crowd to continue the cheers and chants. The band returned with a three song encore, rich in hip-hop flavor and met by an audience that refused to sit. A simplified, quarter note rhythm drove the ultimate finale, hypnotizing the crowd until at last DJ SPS stopped the track with an abrupt brake on the deck and released everybody from their unified entrancement. Some tried to share their impressions as the crowds methodically spilled out onto Washington Avenue, yet most remained euphorically speechless, still absorbing the experience they had all shared.

Click the image below to see all of Karl Beck's photos from the evening's performance. 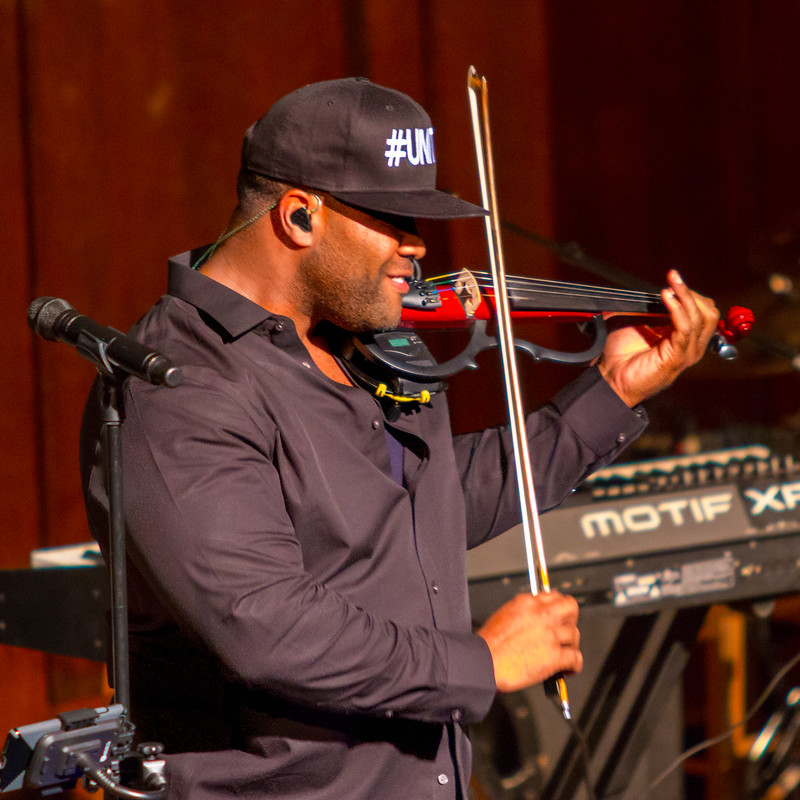