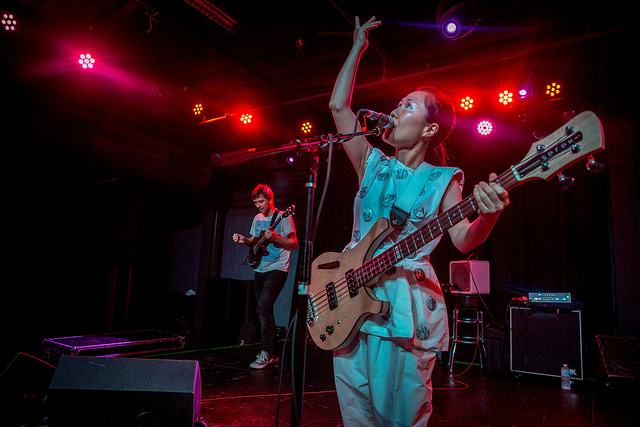 As I was leaving the house to go to the Ready Room, my roommate asked me "What band are you going to see?"

"Um...well... they're kind of indie rock, but, it's definitely a bit more on the experimental side, but they have a heavy dose of pop going on, but also some of their instrumentation could be considered punk, maybe even noise, but..."

I could go on, but you get the point. Unlike 90% of other bands that are advertised as "multi-genre" or "undefinable" or "completely unique," Deerhoof actually delivers. Throughout their fourteen studio albums, they've deftly walked the line between the avant-garde and the effortlessly enjoyable, combining sugary pop with noisy punk and charmingly nonsensical lyrics in English, Japanese, and even Catalan. Considering such hits as "Kafe Mania!," an ode to coffee which features the chorus "Cappuccino/ Macchiato/ Affogato/ Cortado," it's easy to see why Deerhoof is easily one of the most likeable bands around.

Mountain Moves, their latest record, was released in September and joins the recent wave of protest albums created in defiance of the Trump administration. Compared to earlier releases, it's unusually coherent without betraying their signature brand of bold, oddball experimentation. Songs like "Your Dystopic Creation Doesn't Fear You," and "Come Down Here & Say That" give the album a firm sense of purpose without sacrificing any amount of fun; in an era defined by fear, fun can be the most powerful form of rebellion.

The night opens with Lily & Horn Horse, the experimental-jazz-meets-synth project of vocalist Lily Konisberg and tuba player/vocalist Matt Norman. Bright bursts of brass layered over stuttering synth creates a sound that feels entirely foreign albeit kind of pleasant, and the vocal work definitely does a lot to catch listeners off-guard; while Konisberg is pretty in line with other soft, breathy female vocalists (think gobbinjr or Frankie Cosmos), it is Norman's hollow, unexpressive bass voice (basically, imagine if an Easter Island statue could sing) that makes me do a mental double-take. The duo is also surprisingly self-conscious, with little bits of odd, choreographed dances and borderline awkward stage banter. Their music, though, definitely holds its own.

Following them is New York's Christina Schneider's Genius Grant, with Schneider herself provides the vocals. Her smooth, crooning voice cuts through the band's looping guitar riffs and heavy 'one-two-one-two' drum beat. Fuzzy and march-like in their steadiness, Christina Schneider's Genius Grant was consistent to the point of monotony, with no noticeable song progression or memorable vocal/instrumental moments; I imagine that their sound would be more than appropriate for staring out the window in deep contemplation.

According to Wikipedia, Deerhoof's live shows are defined by "minimal gear, maximal volume, and surrealist banter," and I guess there's no better way to put it. Unlike those artsy-fartsy experimental bands with coordinated costumes and entire dance numbers, Deerhoof's aesthetic is completely un-contrived; the band members could easily be in their day clothes. There's nothing ordinary about their performance, though. Bassist and vocalist Satomi Matsuzaki motions deliberately with her hands like a camp counselor leading a song; guitarist Ed Rodriguez could be easily mistaken as a thrash metal musician as he whips around his waist-length hair; drummer Greg Saunier is dripping with sweat by the time the second song is over. Simply put, Deerhoof doesn't hold back. This definitely applies to their music, too, as old hits like "Paradise Girls" and "Breakup Songs" are played with a raucous, punk abandon that one would expect from a relatively young band, not one that's been around for 23 years. In fact, seeing Deerhoof live definitely solidified my confidence in their punk/noise capabilities, as their sound, live, is surprisingly hard and aggressive. Mountain Moves tracks like "I Will Spite Survive" and "Come Down Here & Say That" sound way more defiant in person albeit with the same energetic zest as all their other songs. At the end of the day, it takes a lot of courage to write an album denouncing one of the world's most powerful entities, but it takes way more courage to have fun doing so. 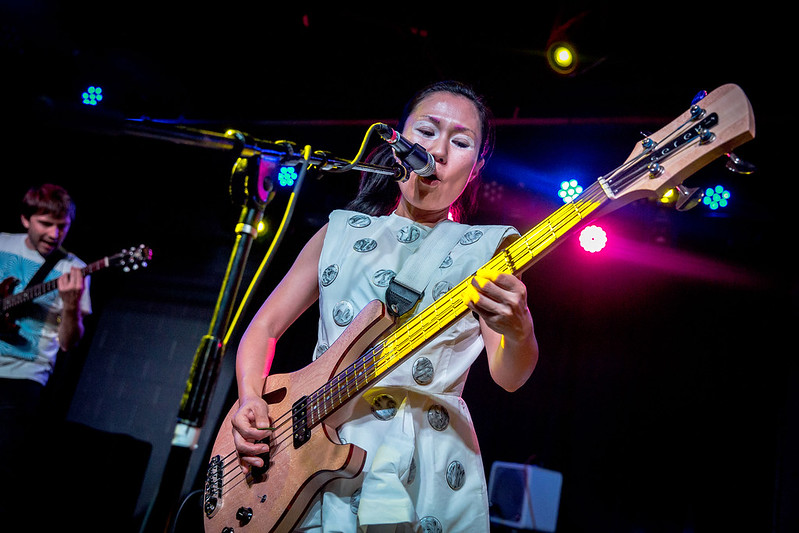