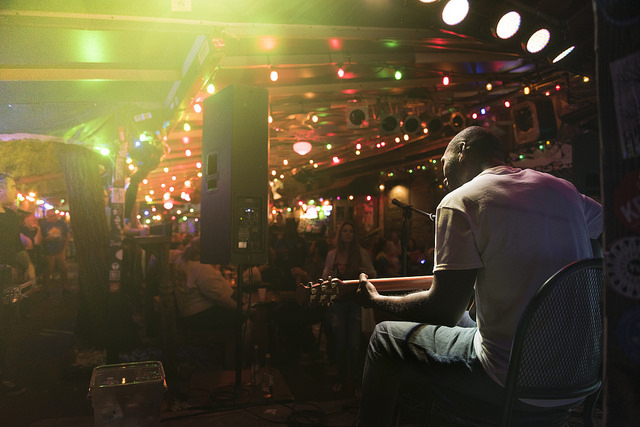 There are very few things in this world that will get me to stay out past midnight on a Friday night. The Cedric Burnside Project at the Broadway Oyster Bar just happens to be one of them. Cedric Burnside is one of the few blues musicians I listen to that is still alive, and thus one of the few that I actually have the chance to hear live. The night is perfect for the Oyster Bar's open-air stage and seating, and I'm leaning against a tree, digging my toes into the oyster shells at my feet and feeling surprisingly good for someone who's pretty sure she's getting stood up.

I hadn't payed much attention to who the opening act was, and I'm kind of surprised when I see who take the stage. There's a guy with a saxophone, two men in tie-dyed shirts -- one with a bass guitar and no shoes and one at the drums -- and in the middle of the stage is the blonde-dreadlocked and stocking-footed Kris Lager. Turns out, they're called the Kris Lager Band.

With every song centering on some shamelessly groovy feel-good refrain like "If you want it, I got love" and "feels so good just to be alive," the Kris Lager Band is a Mary Poppins bag of good-time tricks and surprisingly listenable instrumentals. From call-and-response breakdowns, to saxophone solos with tambourine accompaniment, to soul clapping (turns out you can't not smile when you're soul clapping) every minute of the act is designed to generate as many smiles and closed-eye full-body sways as possible.

Although it feels a little gimmicky at times, the band's solid grooves and inventive soloing reassure me that they are serious musicians (even as Lager breaks into giggles mid-verse). That said, I can't really see myself listening to them beyond this performance. They're talented, creative and a lot of fun, but I imagine most of their appeal would be lost on a recording.

The first half of the set features Burnside alone with the mic and an acoustic guitar, recalling the earliest blues patriarchs. Burnside's solo performance emphasizes traditional blues guitar and simple lyrics about love and loss that need no adornment beyond the roughhewn emotionality of Burnsides voice. Personally, I'm more drawn this sort of old-time blues, and would have been perfectly happy to listen to Burnside solo all night.

But innovation and evolution with the times is as much a part of blues tradition as hard times and bending strings, and the Cedric Bursnide Project use the second half of the set to highlight these elements. This shift in focus is personified as Burnside -- the jeans-and-tee-shirt embodiment of blues's humble origins -- sets down his acoustic guitar and sinks back behind his drum kit, and Trenton Ayers -- swagged out in fringe vest and wide-brimmed hat -- struts to stage front, electric guitar swinging at his hip.

It's immediately clear that the duo's contrasting styles go beyond fashion sense. In almost everything he does, rhythmically and vocally, Burnside stays firmly rooted in Hill Country Blues tradition, whereas Ayers seems much more comfortable with genre bending grooves and solos that stray far into funk and soul territory. This contrast builds a satisfying tension between Burnside's forceful, one-directional drumming and Ayers's playful meandering across various blues-adjacent styles. Though consistently pulling in opposing directions, the two are careful not to overpower each other or to drag the audience too far down either path, and the result is a comfortingly familiar, yet exciting and unpredictable sound.

As the night progresses, the audience's attention drifts from the stage, and the Cedric Burnside Project plays on as the volume of bar-side conversations increases. It's still a great night to be sitting outside with friends, and though it's no longer the focus of the evening, the music remains a key element of the Friday Night atmosphere, even as I finish my last drink, say goodbye to my date (who did show up eventually) and head back to my car.

Click on the image below to see all of Chris Malacarne's photos of the evening's performances at the Broadway Oyster Bar. 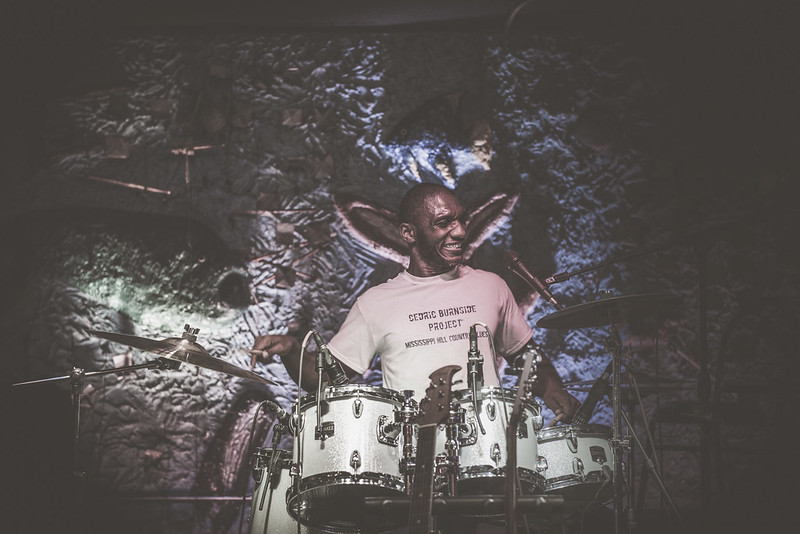