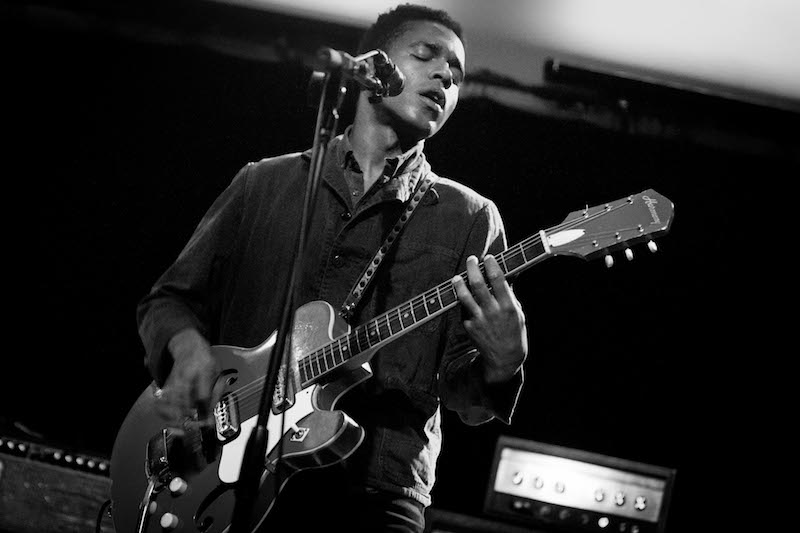 Chances are you may not yet have heard of fresh-faced guitarist, singer and songwriter Benjamin Booker; but hopefully that is soon to change. The 28-year-old with a soulful croon that carries far more depth and longing than his age would imply has been steadily growing his audience since his self-titled debut album was released three years ago. In addition to working the festival circuit, Booker did stints on the road opening for Jack White and Courtney Barnett, putting him in front of crowds much larger than he would be accustomed to on his own.

With a sound that blends elements of hard blues, throwback soul and heavy garage rock, Booker easily appeals to a wide range of music fans. His second album, the much more polished and produced Witness, released this past June, garnered much critical acclaim and buzz, thanks in part to its topical title track featuring guest vocals by Mavis Staples. Touring in support of the album, Booker performed a brief, but delightful one-hour set on Tuesday at Old Rock House.

The late weeknight crowd was just beginning to shuffle in as opener, Brooklyn-based duo She Keeps Bees, took the stage. Vocalist/guitarist Jessica Larrabee and drummer Andy LaPlant filled the venue with their soaring psychedelic blues-rock. Larrabee's haunting and soulful vocals were reminiscent of 1960s Grace Slick at times, particularly on "Head of Steak" and "Breezy." Her tone and control are simply stunning and they proved a good match stylistically for Booker.

He finally emerged for his set around ten o'clock, accompanied by his backing band members, guitarist Matthew Zuk, bassist Mikki Itzigsohn and drummer Sam Hirschfelder. Clutching a vintage red Harmony hollow body guitar, Booker began with the sultry strut of "The Slow Drag Under," which highlighted his soft raspy vocal style. The vocals could have benefitted from a volume boost, as at times, the guitars overshadowed them, making it difficult to decipher the lyrics.

His set, though brief, highlighted a good sampling of tunes from his two albums and illustrated how deftly he can shift back and forth between throwback soul crooning and raw, heavy garage rock, sometimes all in one song, such as in "Wicked Waters." His first album is much more garage rock-focused and he stayed in that place for a few tunes, including "Have You Seen My Son" and "Chippewa," his fingers furiously shredding on his guitar.

Seemingly a bit shy and humble, Booker didn't banter much with the crowd, aside from a couple quiet offers of gratitude, his speaking voice much more meek than his singing voice. He sang with his eyes closed tightly most of the time, losing himself in the lyrics and emotions -- though it would have been nice in such an intimate venue to see him make eye contact and connect a bit more personally with the audience.

He brought Jessica Larrabee from She Keeps Bees to the stage to provide vocal assistance on two tunes, "Overtime" and "Witness," on which she took the part Mavis Staples sings on the recorded version. The latter's theme of anger and frustration over continued police brutality was particularly powerful in light of recent and past local events. The lyrics "See we thought that we saw that he had a gun/Thought that it looked like he started to run," particularly held gravitas, despite the relatively upbeat and melodic tune.

Groovy "Truth is Heavy" was anchored by the thump of Itzigsohn's bass, followed by rocker "Off the Ground," which had the crowd bouncing up and down. Booker kept things upbeat with raw "Violent Shiver" and "Right On You," which included an impressive guitar solo by Zuk. He then brought things down tempo to close show with soulful "Slow Coming" with Zuk on slide guitar. Booker thanked the crowd before quickly departing the stage and surprisingly not returning for an encore.

With just two albums of tunes that mostly hover around the three-to-four-minute mark, an hour-long performance doesn't seem wildly inappropriate, though the crowd certainly would have appreciated more. What Booker's set lacked in quantity, however, it certainly made up for in quality. The biggest takeaway from his work thus far is that the best is clearly yet to come. Booker is an artist who is only just beginning to come into his own and I, for one, am excited to watch him grow.