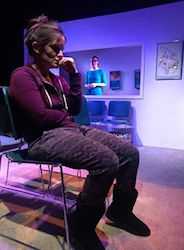 A parent’s worst nightmare leads to a couple’s most divisive dilemma in ‘Cold,’ a poignant tragedy

Tesseract Theatre Company brings a new play by Ben Jolivet to St. Louis audiences with a thoughtful and heartfelt production of “Cold.” The deeply personal play revolves around two parents facing the most tragic of circumstances, the possible death of their young child. The story is a reminder that difficult moments are often the most revealing and even the happiest, most involved couples can be completely thrown for a loop by their partners.

Ellie and Jane are parents to a five-year-old daughter whose common bug has turned into a life-threatening situation. As the two sit in the waiting room, hoping for good news from a last-ditch life-saving procedure, they discuss the worst possible outcome and how they will say goodbye to their child. The situation is taxing and Erika Cockerham, as Jane, and Katie Palazzola, as Ellie, effortlessly move through the emotions that compete for their attention. The effecting show is incredibly sad and at times uncomfortable to watch, but the actors remain in the moment and committed to fully representing their roles.

Director Kate McAllister guides the ebb and flow of “Cold” with a deft touch. Palazzola infuses Ellie with a conflicted energy that moves like a pinball deflecting wildly from one emotion to another yet feels raw and real. Cockerham comes across a bit stiff initially. I am not sure if it’s nerves, the audience is incredibly close to the intimate stage, or a specific choice, but the calm reserve works for the character.

Moments of logic and humor are interspersed with tenderness and anger. There’s a sense that this moment is the first time the couple has had a fundamentally uncompromising disagreement. A nurse questioning her own abilities, played with naturally unaffected warmth by Rae Davis, provides surprising insight during a rambling and entertaining exchange with Ellie, but their dilemma remains. The curtain falls and we don’t know what the couple decides – each member of the audience can make their own choice, which may lead to further introspection but is unexpectedly comforting.

There are some problems with the script. The story arc is a bit too tidy and the characters lack unique quirks and individual depth. Nurse Kim is inept at her job but inherently wise and perceptive beyond her years. Ellie is all feeling and awareness; she yearns in every direction and every sense of the word. Jane is logical, thoughtful and almost cruel in her application of reason. Each feels like an attempt at personifying a type of person rather than people.

In one scene, Jane recognizes Ellie’s emotional outbursts as her way of processing what’s happening. She then demands to know when her thoughts will be considered without ever providing any acknowledgment, much less validation or comfort, to Ellie. The moment feels intended to show how fair-minded and equal the parent’s partnership is but instead comes across as empty almost to the point of being dismissive. Despite strong interpretations by the actors, this crucial scene feels contrived and scripted. The play may benefit by adding more personality and depth to the characters, softening their edges and hard lines. Attention to the transitions, both from scene-to-scene and emotionally, may improve the overall pacing and emotional flow of the compelling story. Still, the play succeeds much more than it fails and the story is genuinely compelling and current considering the severity of this season’s flu bug.

Tesseract also earns praise for its humble but realistic set, which resembles an overused waiting room in a pediatric hospital wing or facility. Though the conversation seems continuous, technical touches like the digital clock on the wall help the audience feel the passage of time during the long, sleepless night. The activity table and children’s chairs in the corner of the stage, nearest to the audience, is almost magnetic. The small set pieces effectively keep the presence of the dying child in our minds. When Ellie absent-mindedly plays at the table, the entire theater holds its breath as Palazzola and Cockerham navigate the moment with an unaffected grace -- it would be easy to miss the exchange but the actors and director McAllister hold it just long enough to resonate.

Though the story is tragic in nature, “Cold,” running through February 18, provides a glimpse into a loving relationship between two intelligent, caring individuals. The characters tend towards stereotype, but compelling performances and focused direction keep the show interesting and engaging. As a result, Tesseract Theatre effectively explores its season-long theme of love by giving audiences a new perspective to consider.