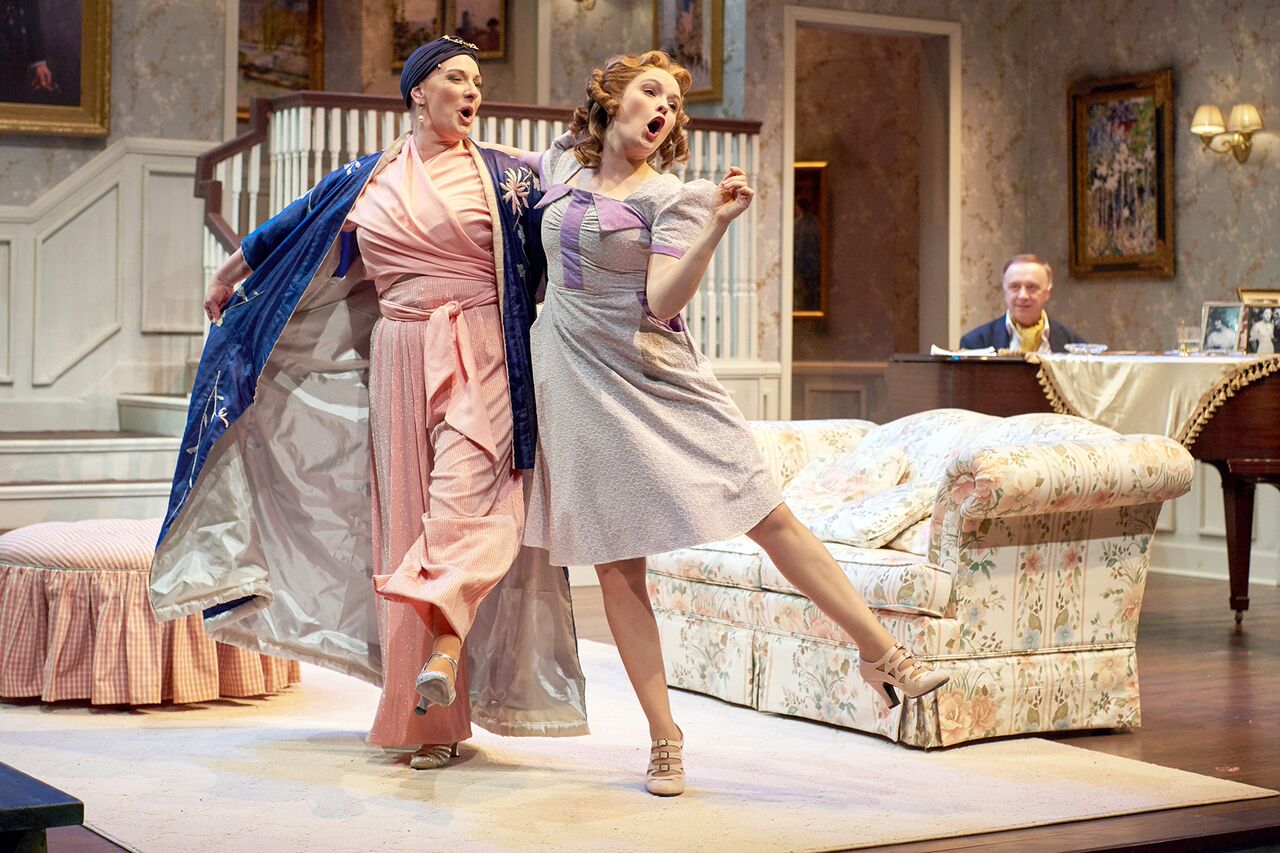 'Grey Gardens' is a beautifully twisted tapestry of privilege, personality, and pain

American royalty. The phrase immediately conjures images of excess and grandeur, of smartly dressed, well-educated men and women mingling on spacious lawns, casually forming alliances that determine the direction and personality of our national character. In reality, the picture is a bit messy and fractured, and its occupants more eccentric and troubled, than first appears. Such is the appeal of Grey Gardens, a wonderfully textured musical filled with finely tuned performances.

Edith Bouvier Beale lives in a spacious mansion in East Hamptons with her aging father, a retired military man, and youngest child, a daughter known as little Edie who seems tormented by her situation. On the one hand, little Edie desperately wants to get married and move far away from her mother's shadow. On the other, she longs to please, placate, and care for her. The family's wealth and fading star, as well as Edith's constant self-publicity, garners curiosity and scandal that deters Edie's suitors and leads to their isolation.

Edith's almost pathological need for attention drives a wedge between little Edie and her soon-to-be fiancé Joe Patrick Kennedy. Yes, of that Kennedy clan. Infuriated, little Edie sets out on her own, determined to break the grasp of her mother's persona. Her increasingly erratic and affected behavior indicates she may have, unfortunately, waited too long to leave. By act two, the two women have become reclusive eccentrics, caring for each other and an unknown number of cats.

Donna Weinsting, Madeline Purches, and Debby Lennon share the roles of mother and daughter, chronicling their relationship at different ages. The artifice works brilliantly, resulting in a spectacular performance by Lennon who skillfully mines Weinsting to suggest ticks and gestures we see in the older version of the matriarch and taps Purches for a sense of the young, hopeful little Edie.

The actresses' movements and gestures don't simply mirror each other, they evolve from each other's work organically, a credit to the actresses and director Annamaria Pileggi. The three create layered reflections of Edith and little Edie that are fascinating to watch develop and change. We clearly see hints of madness in Purches that become fully blown in Lennon, along with a cold, self-serving efficiency brought to mean-spirited fruition by Weinsting.

Will Bonfiglio stands out as both Joe Kennedy and Jerry, a teen who helps care for the pair and the crumbling mansion in which they take refuge. There's a warm kindness and honesty to Jerry that, while inexplicable, feels natural; and Bonfiglio broke my heart when, as Kennedy, he ended his engagement to little Edie with seemingly callous finality.

Actresses Phoebe Desilets and Carter Eiseman charm the audience as young Jackie and Lee Bouvier, cousins who will face fame and scandals of their own. Desilets instinctively demonstrates the poise and political instincts that took Jackie far beyond the White House, while Eiseman is more free-spirited and stubborn.

Tom Murray, Omega Jones, and Terry Meddows round out the ensemble, providing solid support. Each finds ways to infuse their characters with relatable quirks and personality. Murray is frighteningly direct as both the gruff father and the stern preacher, Jones is quietly steady and caring as the father and son who served the family for generations, and Meddows is the friend you want at every party. His piano playing seems flawless from every perspective. Actually, it's the ever-reliable Neal Richardson, who also serves as music director, on the keys, though Meddows sells it with a wonderfully fey touch.

The songs and arrangements highlight Lennon's considerable range while moving the story along with a variety of styles that capture the emotional turmoil and fleeting dreams of the two women. Lennon shines on "The Girl Who Has Everything," "Drift Away," and "Around the World." A number of the tunes, including "Marry Well" and "Jerry Likes My Corn," are bouncy and fun. Purches is fierce in "Daddy's Girl," while "The Five-Fifteen" and "Entering Grey Gardens" are haunting and uncertain. The way the songs serve the story's emotional context is one of the most interesting elements of this complex production.

Grey Gardens, a Max and Louie Productions show running through July 30, 2016, is not an easy musical to distill into a few words, but it is a pleasure to experience. The show and story are intriguing, the characters complex and conflicted, the songs compelling, and the sum of the parts so much more than satisfying.