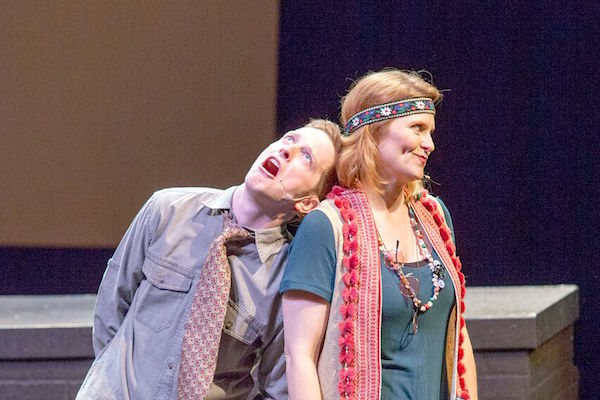 Like a swing, 'John & Jen' is a momentary diversion that doesn't go anywhere

Insight Theatre Company dives into the intricacies of family in the two act musical John & Jen, by Andrew Lippa and Tom Greenwald. The story follows the life of Jen, a young woman with an abusive father, through her relationships with her brother and, later, her son. There's an attempt to find greater lessons on love in the pain and loss of life, but an unfocused script, difficult songs, and a cast not quite up to the musical challenge result in a rather forgettable production.

The first act focuses on Jen's relationship with her younger brother. The siblings live in fear of their father, with no protection other than each other, as expressed in songs and short scenes that hint at the troubles that bind them together. Though she promises to always protect her brother, Jen soon leaves for college, a devastating moment for John. The next time we see the two together, she is an anti-war protester planning a move to Canada and he has enlisted in the navy.

In the second act, we are introduced to Jen's son, John, who's about to graduate and move to the other side of the country for college. Jen, still grieving over the fact she never reconciled with her brother before his death in Vietnam, is reluctant to allow her son to move away and begin a life on his own. Regret and the choices people make to escape bad relationships, even when they're with a parent, are constantly present in this show, but never fully articulated. The characters are much the same.

Jenni Ryan, as Jen, and Spencer Davis Milford, as both brother and son John, work hard to fill in the gaps and define their characters, but it's a difficult task. I am not sure if this is director Trish Brown's interpretation and direction or a weakness of the script, but these characters feel like personas; an amalgam of viewpoints and experiences that represent an era, not a person.

Ryan and Milford put forth the effort but can't overcome the thin script and uninspired songs, which were often just as problematic and vague as the short scenes that linked them together. The two struggle with the material and arrangements, there are a number of moments when the harmonies are off and the notes simply missed. Still I genuinely wanted to embrace these characters and try to understand their story.

Though Jen and her brother have a stronger, more visible connection, it's tenuous at best, making it hard for the audience to come along for their journey. The younger John, Jen's son, is largely undefined even though the second act is centered on his relationship with his mom. Part of the problem here is that there's a lot of exposition and telling, rather than showing in this musical. There are more than a few sweet scenes throughout the show, however, and several of the songs, with appealing choreography from Taylor Pietz, are effective in the moment.

What intrigues me most about the story is the parallels of life, particularly for those who grew up in troubled families. The way learned ideas about love, loyalty, protection, and self-worth reveal themselves through the different but lasting bonds that exist between siblings, and between parents and children. Insight Theatre's ambitious but flawed production is at its best when those moments are brought to light and given an extra pause for attention.

Unfortunately, even some of those scenes suffered from poor execution and a lack of focus on the relationships that are at the heart of this story. Music director Larry D. Pry does a nice job with the orchestra, but, where possible, the vocal parts would benefit from transposition or an emphasized harmonic to help the actors shine. The songs where the range and harmonies work, such as "Dear God" and "Timeline," are pleasant and engaging.

Acceptance, unconditional love, and forgiveness, as well as the cost to get there, are truly compelling themes. Family relationships and hardship are always good territory to explore. But John & Jen loses its way often, and forgets to tie the story together. The direction lacks purpose and certainty at times, leaving the actors too far apart for connection and relying too heavily on photographs and images projected on the video screen. As an audience member, I shouldn't need to glance at the screen to understand the scene I'm watching, and at times, the pictures felt a bit overbearing.

John & Jen, in production at Insight Theatre through July 31, 2016, seems desperate to tell us something, and Milford and Ryan give the show their all. Unfortunately, desire isn't quite enough to result in a satisfying production. I genuinely want to like this production; I simply feel it lacks the depth and quality of story, songs, or character to really hold my interest. Frankly, it left me wanting.