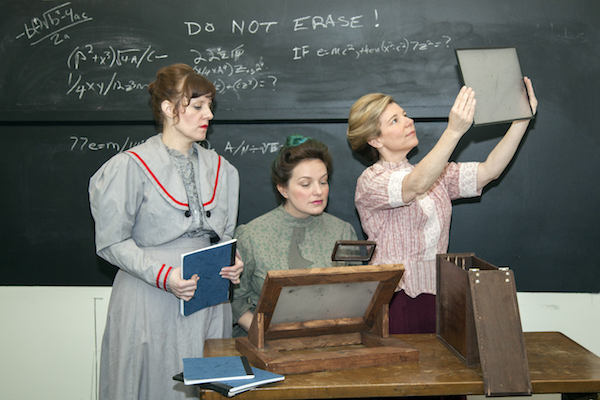 'Silent Sky' reaches for the sky

I enjoyed listening to the dialogue Lauren Gunderson has written for her play "Silent Sky," currently on stage at West End Players Guild. Gunderson has an ear for the music and rhythm of language, and she can be witty. She also benefits from the work of five of the best actors in town, all with good instincts and training, and from the work of their director, Elle Schwetye, who found smart solutions to the script's problems.

Gunderson has a good story to tell. It's about Henrietta Leavitt, an astronomer at Harvard University's observatory at the turn of the twentieth century. She was chosen as the subject of the play because of her major contribution to astronomy. She figured out that the brightening and dimming of a star could be used to measure the star's distance from the earth. Scientists could now get a truer picture of the size of the universe, many times bigger than hitherto thought.

Leavitt was also chosen as the subject of the play because of the conditions under which she did her work. She was not employed at Harvard as an astronomer or as a faculty member. She was one of the women who were called computers, because they computed the brightness of stars using the photographic plates taken with the lab's telescope, which they were not allowed to touch.

One of the young men in the observatory who was allowed to use the telescope adds a romantic element. I don't know if such a romance actually happened, but Graham Emmons delights with his bashful approach to Henrietta, finding excuses to visit the women's workroom and obviously infatuated with her.

As Henrietta, Rachel Tibbetts here adds emotional depth to her depiction of the intense, dedicated scientist. Jamie Pitt and Michelle Hand play Henrietta's colleagues. Pitt's Annie Cannon sternly crack the whip over her fellow computers. Michelle Hand gets some of the best lines as, if I understood correctly, Scottish immigrant Williamina Fleming, with a sharp eye and wicked wit. Colleen Backer plays Margaret Leavitt, Henrietta's sister, who stays home in Wisconsin, marries, has children, and encourages her sister's work, whether near or far.

Director Schwetye has arranged the audience on three sides of the large, sparsely furnished playing area. Video designer Ben Lewis's visions of the starry sky fill a large upstage screen. Costumer Tracy Newcomb traces the evolution of fashion in the early twentieth century. Nathan Schroeder designed the lighting and director Schwetye the sound; mostly generated by today's computers, perhaps anachronistic but sounds we associate with the mysterious depths of space where this fascinating play "Silent Sky" takes us.