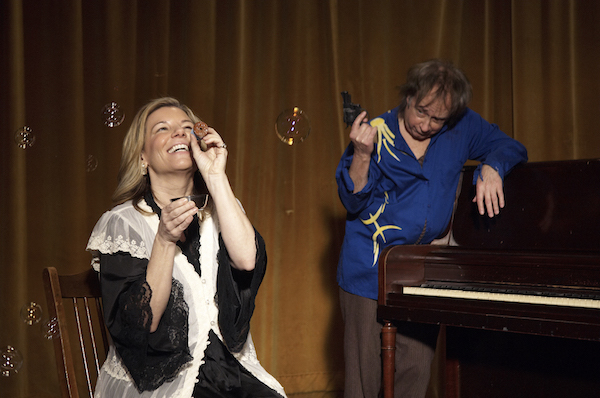 The Tennessee Williams Festival St. Louis focused its inaugural year on the playwright's years in St. Louis, including numerous productions set here or inspired by characters from his life in the city. The Two Character Play is a wonderfully layered, brilliantly acted exploration of family relationships and slipping reality. What makes the play so interesting and unusual is that it features new characters from playwright Williams who somehow feel intimately familiar to fans of his work.

Playwright Felice and his sister and leading lady Clare are stuck in a theater in the middle of the boondocks after being abandoned by their manager and the rest of the company. The other actors have labeled the two insane, and by the end of the show's quick two acts, some audience members may be inclined to agree with them. Undaunted, Felice pushes on, convincing his sister to perform The Two Character Play.

The play within the play is a dark, twisted tale of southern siblings clinging to their crumbling mansion after witnessing the murder-suicide of their parents. It is not clear whether fear, misguided allegiance or simple insanity causes the two to remain in the house despite the fact that they are out of food and all utilities have been cut off. As it turns out, Felice and Claire's offstage story is nearly as convoluted and confusing as the show they're desperately trying to remember and perform.

The production slides effortlessly between the actors and the play, blurring the line with dialogue, action, and intention that seems to somehow fit both situations. Joe Hanrahan and Michelle Hand are brilliantly lucid and phenomenally confused; their relationship deeply intertwined and absolutely dependent. It is incredibly difficult to accurately portray characters with tenuous grips on reality, but Hand and Hanrahan turn in masterful, seamless performances that reek with authenticity. As with some manifestations of mental imbalance, it is not always easy to follow the character's thought progression and the actors convey this without over-exaggeration or caricature.

Hand reveals multiple connected but distinct personalities as Clare, complete with physical tells and affectations. Hanrahan's Felice appears more consistently in the moment, but his tendency towards violence and forgetfulness belie the effort his sanity requires. The essence and motivation of each character, though difficult to parse, is well-articulated with thoughtful, sharp-eyed direction by Sarah Whitney. Together, she and the actors suggest the burden and blessing of kinship, as complimented by Williams' dense, lyrical dialogue.

It has been postulated that the brother and sister in The Two Character Play may in fact represent a new iteration and different circumstances for two of Williams' most beloved characters, Tom and Laura from The Glass Menagerie. There are distinct correlations that can be drawn between them, and it is clear that both women share traits reflective of Williams' sister Rose. I'll leave the scholars to debate the connection. For me, this show is a powerhouse exploration of tragically and irrevocably flawed characters who somehow find the will and fortitude to push on. Sanity can be fleeting when survival is not assured, and the play probes these dark corners in compelling, disturbingly poignant scenes.

Mark Wilson creates an appropriately tattered and somewhat unreliable set, complete with rudimentary stagecraft and wonderfully nuanced lighting, while stage manager Liz Henning ensures the production keeps moving. The combined results are deeply effective and unsettling, the mood of the show settles in like a sad realization hanging over everyone's head that no one wants to voice. Similar to Waiting for Godot, the show is infused with uncertainty and indecision that inexplicably binds the characters to each other and to their present situation. The impact is palpable, from the moment the curtain opens to the final bows, as the audience is drawn into the sibling's tale and compelled to care, to root them on even while we remain uncertain as to the purpose.

Originally produced for the inaugural Tennessee Williams Festival St. Louis, The Two Character Play will enjoy an extended run Fridays and Saturdays May 27 through June 4 at Winter Opera's space at 2322 Marconi as the Midnight Company further embraces the experimental, tangential nature of the play. With powerful, convincing performances and perceptive direction, Hand and Hanrahan have created a stunning, sometimes unsettling, show that deftly explores insanity, aging and our persistent need for love and companionship.