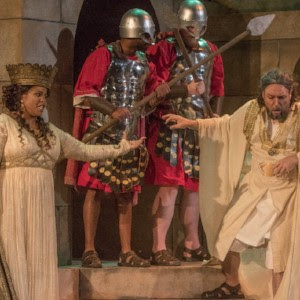 Verdi’s “Nabucco” is a stirring operatic take on ages old stories of war, love and faith

Union Avenue Opera presents Verdi’s first successful opera, “Nabucco,” which tells a story of family division and greed set against the backdrop of the war waged by the King of Babylon against the people of Jerusalem. The story of passion and greed gets an impressive interpretation in the opera’s fast-moving, emotionally evocative production.

Zaccaria, the high priest, has captured Nabucco’s daughter and is holding her prisoner in the hopes of negotiating peace through the return of the girl to her father. But Fenena has secretly fallen in love with Ismaele, the king of Jerusalem’s nephew, and accepted the Hebrew god as her own. Her half sister Abigaille, a fierce warrior with eyes on the throne, bursts into the temple and threatens to destroy it unless Ismaele abandons Fenena and swears his love to her, but he will not.

Abigaille is victorious and Nabucco in a fit of arrogance and anger claims that he is equal to god, causing him to be struck by lightening and grievously injured. Abigaille quickly grabs the crown and begins her rule by sentencing Fenena to death. On realizing he has signed the document sealing his daughter’s fate, Nabucco becomes clear headed, gathers loyal members of his guard to help him save his daughter and accepts the Hebrew god. But is it enough to rescue Assyria from the vengeful and ruthless hands of Abigaille?

Verdi’s music is inherently complex and following each theme requires strict attention. The opera is filled with both reverence and war and begins with an overture that introduces the major themes of each character. The music builds with precision and the layered themes of the principle characters are supported by an enveloping orchestral arrangement that supports each of the contrasting melodies. Strong performances from Marsha Thompson as Abigaille, Robert Garner as Nabucco, Melody Wilson as Fenena, Jesse Donner as Ismaele and Zachary James as Zaccaria help audience members follow along, aided by the translated subtitles. Each of the leads has a firm understanding of their role both from the standpoint of classic opera and as characters in an interwoven story.

Though the show features multiple plots, this story is clearly centered on the struggle for the crown between Abigaille and Nabucco. Thompson and Garner carry the lion’s share of the vocal leads and major arias in the performance. Thompson shines as the slave turned regent. Her soprano bold and clear, she effortlessly hits and sustains each note without wavering and there’s a ferocity to her performance that’s thoroughly captivating. Garner counters with a resonant voice and a bass to baritone range that enables him to easily move from his highest to lowest moments. Together, they create distinct, compelling characters, their animosity palpable and their clash clearly unavoidable.

Wilson is endearing as the young Fenena, and she’s a lovely mezzo-soprano who acts convincingly. A number of her most important character moments are conveyed without speech making her pure, vulnerable singing all the more effective. Donner, a striking tenor, complements Wilson ever so gracefully. James is an imposing figure with a deep, rich bass and height to tower over the others, adding gravitas to his youthful portrayal of the high priest. Though it is occasionally difficult to understand him in the lower end of his range, his notes are true.

The chorus cannot be overlooked in this production, as each voice is finely tuned and their contributions to the opera considerable. The opening lament and the processional in Act III are powerful, moving moments, with the ending notes of the movement delivered in quiet almost ethereal perfection. Several members of the ensemble also shine in brief solos, including Karen Kanakis, Clark Sturdevant and Jacob Lassetter. Conductor Stephen Hargreaves and stage director Mark Freiman provide expert guidance, ensuring quality performances that help convey the story and musical themes.

Patrick Huber’s stage is imposing, efficient and enhanced by his light design, providing multiple levels for visual interest and storytelling that also create space for each individual voice. Teresa Doggett’s costumes complement the story and characters. The Hebrews are garbed in simple fabrics and earthy tones, the Babylonians in beautifully embellished, richly colored fine fabric and jewels. Color is used to designate the factions of the Babylonians. Those following Abigaille are in oranges and reds; those following Nabucco are in white, khaki and gold, though Abigaille also dons the white and gold of regency. Fenena and the other innocent women wear shades of purple and blue. The cues help those in the audience less familiar with either the opera or the story to follow along and quickly understand both nationality and allegiances.

Composed in 1841 and infrequently performed, though the Hebrew chorus in Act III is well known, the opera is engaging and the story simple enough that even opera novices, like this reviewer, can grasp the plot and themes. “Nabucco,” continuing through August 4 at Union Avenue Opera, may be less familiar to opera fans but the work is thoroughly engaging and the music retains all the qualities that mark Verdi as among the most significant and important operatic composers. The score successfully uses both voices and instruments to create lush soundscapes that deliver the story with effective drama and the performances of Thompson and Garner, in particular, are expertly conveyed and convincingly sung.