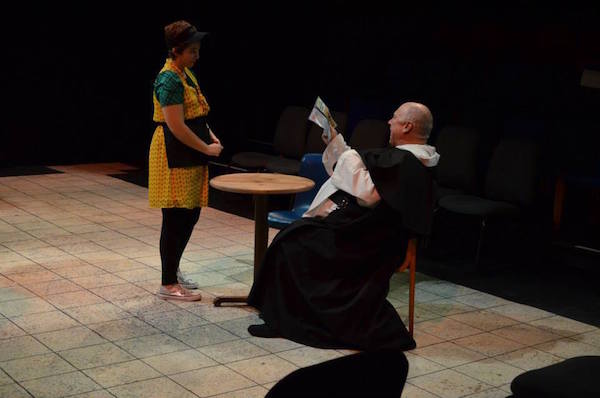 'Mitzi's Abortion,' challenge audiences to reconsider their assumptions and perspective

Tesseract Theatre is known in St. Louis as a small company, bravely pushing the envelope by presenting new plays. The company’s work includes regional and national premieres, as well as production of pre-premiere and pre-publication scripts. Their purpose and mission provides many benefits to our community, not the least of which is the opportunity to see plays that may make us uncomfortable, which are written and portrayed with the clear intention to do so.

Such is the case with Mitzi’s Abortion, a play that examines multiple, but still not all, perspectives in the case of a woman facing an unpleasant choice in the late term of her pregnancy. The playwright eases the audiences’ minds somewhat by ensuring the choice Mitzi faces is due to a fatal condition, but the many voices represented challenge the idea that there are absolute answers to all of the dilemmas we face.

Mitzi and Chuck are a couple in their early twenties. He’s enlisted in the army, she’s a student and sandwich maker at a popular sub franchise, and the audience learns they are pregnant in the opening scene. Though they are young and Mitzi is conflicted about starting a family right now, this is a happy time, all-in-all. They are soon married and living in a small apartment near the base.

Shortly thereafter, Chuck is sent to Iraq for his first tour of duty and Mitzi is left at home. Luckily, she has a supportive family, close friends, and two visitors from history – the theologian Thomas Aquinas and Scottish midwife Reckless Mary – to assist her through her heartbreaking journey. There are a lot of layers to this play, as playwright Elizabeth Heffron summarizes two thousand years of Christian thought and medical science in ninety minutes. The breadth of thought included creates logistical and contextual challenges, but the cast and director Taylor Gruenloh fully commit to the story and characters.

Mikayla Scharfy portrays Mitzi with deep hesitation and surprising conviction. She’s complemented by Cole Jacobs as Chuck, a man clearly eager to become a father, but ill-equipped to handle the challenge. Robert Michael Hanson is quite entertaining as Thomas Aquinas. Bre Love is a passionate, flirtatious, and endearingly caring Reckless Mary, and Katie Palazzola brings a sharp, yet sympathetic, approach to her role as the lecturing expert. Kelvin Urday and Erisha Tyus entertain as Mitzi’s best friends, though it’s disappointing that their characters are at times so stereotypically drawn. Finally, Christopher Null, as Dr. Block, and Cara Artman and Alexander L. Hylton, as Mitzi’s mother and step-dad, turn in solid performances.

The ensemble cast delivers a clear story, but the show lacks emotional depth and substance overall. This is most present in Scharfy’s performance, which falls short of the emotional variety and expression she typically brings to her characters. This shortcoming also clouds some of the smaller performances, and there are a number of scenes that feel unnecessary to moving the story forward. The most notable are the song and dance scene and the flirtation between the doctor and Reckless Mary. This is possibly the fault of a short script trying to pack in too much context or too many viewpoints, but while I appreciated the script and performances, I left the theater feeling there was something missing.

Abortion is a hot button topic, and there are a plethora of opinions and facts that influence a woman’s or a couple’s decision to terminate a pregnancy. Current politics and legislation surrounding abortion rights underscore the need for stories and plays like Heffron’s, and though I feel the script could use some tightening and the characters more distinct emotional journeys, I applaud the playwright and company for presenting a memorable exploration of the subject.

Though not for all audiences, Tesseract Theatre’s Mitzi’s Abortion is provocative entertainment, with solid performances and thoughtful direction by Taylor Gruenloh. Most importantly, the show nudges audiences to give more thought to important questions surrounding abortion and especially to consider the gray areas in which too many seek clear-cut answers.