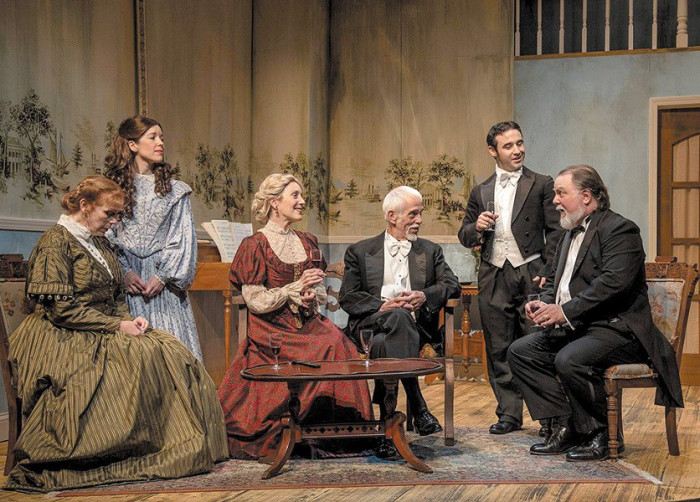 St. Louis Actors’ Studio brings Lillian Hellman’s seething family drama, set in the post Civil War, reconstruction-era south, to life in a riveting show that turns on the women of the family. Regina, the ruthless, strong willed sister, and Birdie, the beaten down and fragile wife of brother Oscar, represent the extremes of femininity in an engrossing, uncomfortable drama. “The Little Foxes” is a dysfunctional tale of greed and ambition that knows no bounds, but is so well written and performed, with characters whose flaws and foibles resonate as deeply authentic, that one can’t help but be mesmerized.

Regina’s family has clawed their way to the top of society through sometimes shady business dealings and a particularly beneficial and cruel marriage. Owners of a cotton mill, they’ve convinced a Chicago-based manufacturer to partner with them in building a clothing factory in their town. To close the deal, they need Regina’s husband to put up additional funds, and the three siblings will stop at nothing to secure the money.

Kari Ely commands the family and the stage as the determined and unyielding Regina, overtly manipulating people and situations to her benefit. Her scheming mind never stops looking for opportunities to strengthen her hand and Ely let’s the audience see her machinations without revealing too much. The character is essentially unlikeable, but Ely ensures she’s fascinating and unforgettably watchable. Clearly accustomed to getting her way, Regina moves, acts and speaks with certainty. Even her well-deserved comeuppance, delivered with gleeful spite by William Roth as husband Horace, only causes her a momentary stumble.

In contrast, Laurie McConnell shines with an otherworldly light as the detached and browbeaten Birdie. Devastated by her husband’s lack of love, their marriage was merely a play for wealth and property to him; Birdie comes to life when Marshall, the Chicago business partner, seems to take an interest in her musical gifts. Her joy is cut short by Oscar, and soon she is once again seeking comfort in nostalgia and sweet wine. McConnell fills Birdie with longing and a fear that begs for a scrap of attention and affection. The audience willingly complies though the character never knows.

An equally compelling and committed cast surrounds the two women. As brother Ben, Chuck Brinkley is nearly as ruthlessly conniving as Regina, while Bob Gerchen is less artfully deceitful as brother Oscar. Brinkley struts and bellows, offhandedly sprinkling racist, sexist and classist bigotry into his conversation. Gerchen complains bitterly and tries to arrange a marriage between Regina’s daughter Alexandra and his son Leo, while also secretly plotting a theft. Ryan Lawson-Maeske slides effortlessly into the dull-witted presumption of Leo’s youthful entitlement, he’s an almost likeable buffoon at times but proves himself as untrustworthy as his father.

Roth is resigned and stoic as Regina’s husband Horace, but his scenes with Bridgette Bassa, as the beguiling Alexandra, and Wendy Greenwood, as the reliable and kind hearted Addie, sparkle with chemistry and affection. Bassa and Greenwood provide a sliver of hope with a friendship that feels authentic and supportive, and Bassa shows a steely backbone of her own when she finally stands up to her mother. The moment is like a breath of fresh air pushing through the dense fog in the compelling but bitter drama. In support, Dennis Jethro II is charming and eager as the loyal slave turned servant Cal and Richard Lewis capably adds to the drama as the flirtatious big city businessman Marshall.

As usual, the company ensures that the technical aspects of “The Little Foxes” make the most of the theater space, creating an environment that complements the tense play. Director John Contini skillfully moves the show along, minimizing gaps and transitions and expertly building tension through staging and interpretation. Patrick Huber’s set design transforms the tight space into a well-appointed mansion, enhanced by his lighting and Contini’s sound as well as gorgeous costumes by Megan Harshaw that display just the right touch of conspicuous wealth.

“The Little Foxes,” continuing at St. Louis Actors’ Studio through October 14, is enthralling theater, though it may make you squirm uncomfortably in your seat from time to time. In addition to racial slurs, domestic violence, and the demeaning treatment of women, the show features a fascinating if unpleasant family engaging in the business of deception and greed. Hellman’s writing is so sharply perceptive, and similarities to modern family dynasties abound, but it’s the fantastic performances that ensure this show is as interesting as it is entertaining.