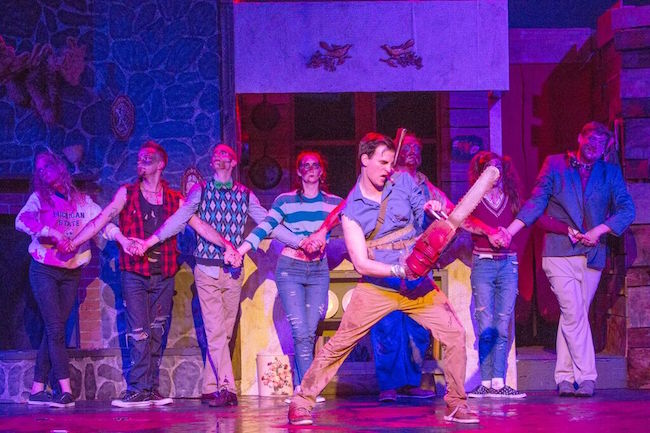 ‘Evil Dead: The Musical’ spooks up some gore-infused hilarity in a lively production

Just in time for Halloween, Stray Dog Theatre brings back the hilarious tongue-in-cheek musical about a group of teenagers who encounter evil, and sometimes very sarcastic, spirits when they venture off the beaten path to a little cabin in the woods. Equally bubbly and gore-drenched, with a quirky sense of referential humor, “Evil Dead: The Musical” is a fast-paced, blood-soaked good time.

Things get a little weird even before Ash, his girlfriend Linda, kid sister Cheryl, best friend Scott and his date Shelly arrive at the mysterious cabin they’ve “borrowed” for their school vacation. Once inside, they hear strange noises from the basement and find a strange book and tape recording of the cabin’s owner, as well as an axe and a gun. These items, along with a chain saw, will become important before this comically bloody musical concludes. With a wink and a nod to the audience, typical teenage horror movie tropes are gleefully skewered as Ash fights away the determined evil spirits while exchanging rapid fire one liners and groan inducing puns.

Riley Dunn has just the right swagger and confidence as Ash, with a strong voice that remains clear and distinct even as the cacophony builds. He times his delivery with just enough hesitation to allow him to pose cheekily and telegraph the ext joke. Christen Ringhausen is perfectly over-animated as his sister Cheryl, the first of the friends to be taken over by the evil forces and the wittiest of the wise cracking spirits. Her voice and movements seamlessly shifting from mechanically animated to cackling evil, and her vocals clear and true. Dawn Schmid, Stephen Henley and Jennelle Gilreath have a blast as the rest of the teens. Schmid is perky. Loyal and just a bit naughty in contrast to Henley and Gilreath’s overtly stereotypical “raging hormones.” Kevin O’Brien, Josh Douglas, Maria Bartolotta and the effortlessly expressive Corey Fraine round out the ensemble with strong performances that are appropriately and humorously exaggerated, if a bit thinly drawn.

Directed by Justin Been with music direction by Jennifer Buchheit and choreography by Sam Gaitsch, the production moves at an almost frenetic pace while working in a few updated pop-culture references that add to the fun of the show’s intentionally over-the-top singing, acting and violence. Musically speaking, the fun begins on the drive, with the spirited “Cabin in the Woods” and continues with the corny but cute “Housewares Employee” before taking off with the anthemic “Look Who’s Evil Now.” “Bit Part Demon,” “All the Men in My Life Keep Getting Killed by Candarian Demons” are “Do the Necronomicon” are highlights of the second act, but there isn’t a dud or an off note the entire show.

Costume designer Eileen Engel and make-up designer Sarah Castelli are perfectly synchronized and aligned with Bell’s comically excessive vision. The evil masks are particularly effective as is Bartolotta’s constantly ripping and increasingly revealing costume. Other smart touches include Douglas’ take on the Moose, the manic trees, Ringhausen’s perfectly timed use of the trapdoor and the occasional, and likely purposeful, visibility of a crew member. The incessantly over-the-top approach emphasizes the humor in a way that ensures the audience is absolutely in on the joke. Still, the spirited show is not for everyone’s taste, whether it be the amount of stage blood, the thin, campy story or the frivolous nature of the production. But the horror story is relayed with a heaping spoonful of comic mayhem, ensuring most will be comfortable with the silly, messy show that’s intended to be a good time.

Audience members who want in on the action should make their reservations in the “splatter zone,” a special seating section that puts fans in the middle of all the bloody good fun. Though you will be given a commemorative t-shirt as a cover up, I recommend you wear an easy to clean outfit in the zone. “Evil Dead: The Musical,” continuing through October 27, is a campy musical comedy that isn’t afraid to get down and dirty. Stray Dog Theatre serves the musical well by not over-thinking things and the result is an uproariously funny and highly entertaining production.