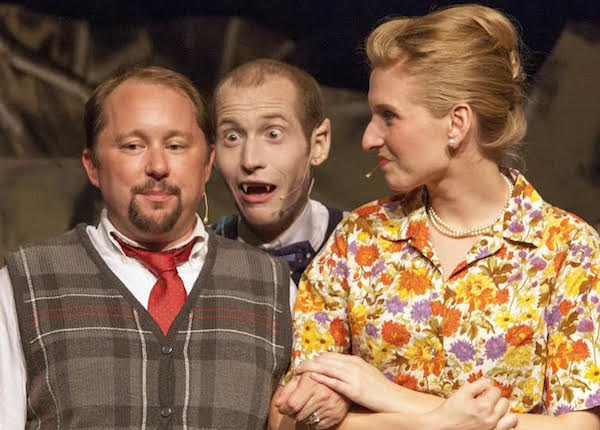 'Bat Boy: The Musical' teaches tolerance and acceptance in a comically twisted tale

Stray Dog Theatre sinks its teeth into the quirky musical Bat Boy, a tabloid-inspired show with a big message on love and tolerance, and it's deliciously different and entertaining. The fast-paced, energetic production tells of a mysterious half-human, half-bat boy found in a cave near a small town in West Virginia. The townsfolk are scared and frightened because he is such a different creature, and the creature is scared and frightened by the townsfolk and his unfamiliar surroundings. Throw in an insatiable appetite for blood, and you've got a humorous mix of teen drama, vampire myth, and tabloid-fueled hijinks guaranteed to entertain.

The captured boy is taken to the home of Dr. Thomas Parker, the local veterinarian, with the assumption that the good doctor will "put the creature down" and end the misery his existence causes. But, for reasons not immediately clear, the doctor can't bring himself to kill the boy, and soon he, his wife and daughter are spending their time working to educate and civilize the creature so that he can join the community. Given the name Edgar, the bright boy is soon dressing dapper and speaking with a comically proper British accent.

He still has troubles controlling his desire for blood and resisting the urge to attack when emotionally threatened, but Edgar's sincere desire to join the community and to be accepted for who he is, is poignant and effective. Unfortunately, the town is not as accepting as the family. Tensions escalate when locals begin dying mysteriously, a fact complicated by the town's questionable decision to try to raise cattle on inhospitable land. Soon Edgar and his sister are fleeing into the cave pursued by an angry mob, Dr. Parker is behaving quite suspiciously, and Mrs. Parker is putting all the pieces together and fighting like hell to protect her family.

Corey Fraine is mesmerizing as Edgar, the Bat Boy. From his acrobatic leaps and turns across the stage to his polite Christopher Robin-esque sense of curiosity, he embraces his character and asks only to be embraced in return. Drawing from both B horror movie and comedy of manners influences, Fraine is by turns vulnerable, aggressive, and charming, and the plaintive tone of his voice is effectively tender in a number of songs.

Angela Bubash and Dawn Schmid are by turns effervescent, coy and stubborn as daughter Shelley and mom Meredith Parker, with strong voices that add richness to the numbers. Patrick Kelly is a jealous, villainous dad, with a squeaky clean exterior and desperate love. The supporting cast has the appropriate vocal and comic chops to create distinct, entertaining characters, and Colin Dowd, Tim Kaniecki, Michael A. Wells, Lindsay Jones, and Sara Rae Womack are memorable in several scenes.

Though inspired by an over-the-top piece of tabloid journalism, Bat Boy The Musical speaks to contemporary themes and problems we face in society today.. Using a clever script that mixes references to Frankenstein and vampire mythology with nods to My Fair Lady and countless makeover romantic comedies and pop culture humor, the show encourages us to be more understanding, and to seek commonalities among those who stand out from the crowd, no matter why. Director Justin Been directs the show using as much of the theater space as possible, adding surprising moments while maintaining a focus on the story. Robert J. Lippert sets the tone with a massive cave-like set that features the band on a raised level, and is complemented by Tyler Duenow's lighting design. Strong arrangements by music director Chris Petersen keep the focus on the theme, while Mike Hodges'  choreography takes advantage of every corner of the stage with humorously effective dances that understand the size and scope of the venue.

There's a real message about tolerance and understanding at the heart of Bat Boy: The Musical, running through August 20, 2016 at Stray Dog Theatre, perhaps the catchy songs, warm humor, good-natured excess, and inspired performances of this tabloid-take on the theme will help the message sink in. I would like to think it's a show and message Jay V. Hall would enthusiastically support, I both missed and felt his smile and presence throughout the entire performance.