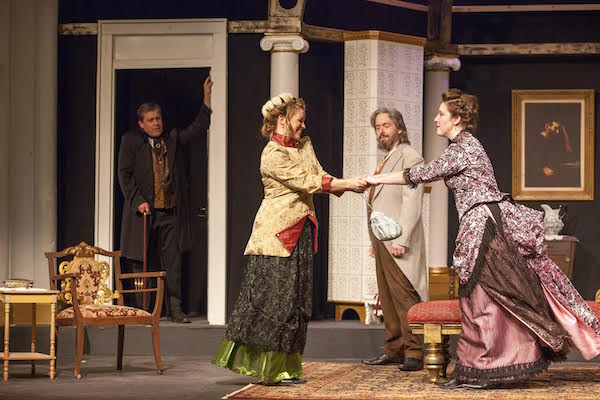 Nicole Angeli takes us on an emotionally compelling, intensely personal tour through 'A Doll's House'

Stray Dog Theatre takes a deep dive into the classics and restores a once scandalous treasure with a provocative and stylish interpretation of A Doll's House. Henrik Ibsen's perceptive Victorian-era piece, adapted by Frank McGuinness, introduces us to Nora and Torvald Helmer, their household, and friends. Torvald will soon begin his new position, providing a significant social and financial boost, and the affectionate couple is n the mood to celebrate.

Nora lives her life with a joyful, playful approach, spending her money freely and blissfully ignorant of the day-to-day realities of running her household. She has hired help, three clever and well-behaved children, and an indulgent husband who dotes on his "little songbird." Though it appears she hasn't a care in the world, a secret, shared only with her childhood friend Kristine and the man to whom she's in debt, casts an increasingly dark and foreboding shadow over her happiness.

Ever the chameleon, Nicole Angeli loses herself in the role of Nora to spectacular effect. She flits and flitters with natural charm, but there are a dozen nearly imperceptible reactions that quickly cross her face before she settles on the appropriate reaction. It is a deliciously nuanced touch that illuminates the character's emerging sense of self, but also reveals fissures that eventually shatter her carefully constructed facade. Angeli realizes Nora's emerging identity and necessary change with devastating conviction in a mesmerizing, commanding performance.

Angeli and the excellent supporting cast are completely in tune with director Gary F. Bell, and the result is compelling and authentic. John N. Reidy sighs and pines for his friends' happiness as Dr. Rank. Stephen Peirick is both off-putting and sympathetic as Krogstad, a man seeking a second chance but desperate enough to threaten Nora. Rachel Hanks is wise to the ways of the world and a bit weary as Kristine. Her life has not been as easy as Nora's, but Hanks resists any inclination to be bitter and her character is instrumental in Nora's evolution. Melanie Kozak, Simon Desilets, Joe Webb, and Tina Renard capably round out the cast as the Helmer's household staff and children.

Ben Ritchie as Torvald, Nora's unconsciously dismissive and controlling husband, provides the perfect foil and antagonist for Angeli's Nora. The two actors know and trust each other completely, enabling them to give over to Bell's direction and the unrelenting deconstruction of their characters that Ibsen so brilliantly scripts. Usually praised for restraint, Ritchie is the one who loses control by tightening his grasp, and Angeli responds with exquisite poise and venom. Though painful, the impact is neither cruel nor hateful, but by turns raw, brutally honest, and deeply exuberant, a release rather than an explosion.

I am a fan of Ibsen's work, but find I am almost always disappointed in staged productions. With A Doll's House, the direction is usually heavy-handed and melodramatic, creating a production that overlooks the important unpacking of theme and character. Luckily, Stray Dog Theatre avoids these traps in their thoroughly engaging, smartly entertaining production.

As usual, Stray Dog Theatre elevates its space with visually clever scenic design by Robert J. Lippert, costumes by Eileen Engel, lighting by Tyler Duenow, and sound by Justin Been. The costumes reflect the elaborate style of Victorian wealth, the men are dapper and Nora and Kristine more refined and elegant with every change. Spectacular architectural details -- an elevated, ornate peaked ceiling and curved walls -- suggest a gilded cage in which Torvald's lovely bird is confined, emphasizing the intentional sub-context with an inspired flourish.

The actors are eloquent and graceful, even in the most awkward situations, yet Angeli and Hanks characters are clearly balancing on an edge, vibrating with tension and barely contained rage. Not a violent, destructive rage, but anger with the status quo and a burning desire, a need really, that compels them to seek value and meaning beyond wife and mother. Bell's direction is his best work yet, he and the actors create an emotional ebb and flow that effortlessly transitions and builds tension. Though the themes are not as shocking as they once were, and sometimes inspire laughter, self-dominion and the role of women remain relevant for contemporary audiences.

Stray Dog Theatre's well-crafted production of A Doll's House, running through February 18, is a period piece resonant with metaphor and emerging feminist autonomy. The company captures the persuasive language of Ibsen as well as his sense of detail and control in a visually pleasing, emotionally satisfying production in which Nicole Angeli makes the most of her ability to transform into her character.