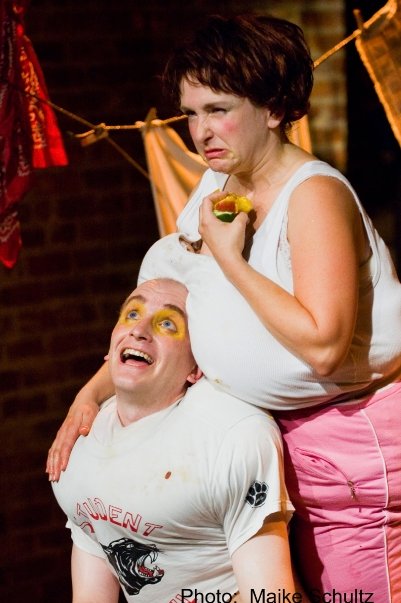 "The Glass Menagerie" has been revered by audiences and critics around the world for three-quarters of a century. I suppose that, like all sacred icons, it occasionally should be taken down a peg or two. The very energetically wild folks at Ten Directions have arrived, axes in hand, to have a chop or two at this old classic. Their "Bouffon Glass Menajoree" opened last night at the Centene under the aegis of the Young Liars.

"Bouffon" is an antique-sounding, but really modern term in theater. It's the invention of Jacques Lecoq, a phys-ed teacher and former gymnast, who fell into the questionable company of some of the principal figures in the radical experimentalism that suffused continental theater after World War II. (Among Lecoq's influences were Antonin Artaud, Jean Louis Barrault and Dario Fo.) Lecoq opened a theater school in Paris which focused on the physical--clowning, mime and acrobatics. It had elements of Commedia. He stressed interaction with the audience. Mockery was a strong feature of his theater philosophy. Famous alumni of this school include Sacha Baron Cohen, Julie Taymor and the founder of Cirque du Soleil.

The characters in this wacky version of Glass Menagerie appear--one, two, three--rising from a box, just like circus clowns from a tiny car. They are Lynn Berg as Tom, Audrey Crabtree as the crippled Laura, and Aimee German as Amanda, their mother. And what a sight they are!

Mr. Berg bears a hump on his back that would shame Quasimodo. He's dressed in a cropped T-shirt and very tight shorts over ratty long-johns. Our Laura appears with a haggish white fright-wig and wears a filthy, spotted, ragged hospital gown. Underneath she wears nothing but a sort of paper diaper, held on with duct tape. She shows the remnants of a bloody nose. When Amanda enters the scene she is preceded by her simply colossal bosom. (At one point she makes an entrance doing an impressive flip, quite unimpeded by that poitrinary superstructure.)

These people look like escapees from the Cuckoo's Nest.

There are frequent interactions with the audience. Tom conducts mini-interviews with audience members, Amanda has a sex-phone conversation with one. This is all mocking the audience and it involves a lot of ad-libbing, which is carried off with supreme confidence.

I've never understood the impulse to involve the audience in a performance. It's always embarrassing for the victim; it's never that funny. But I think now I can see why an actor might have an urge to do this. The actor usually labors as a slave under the authoritarian thumbs of the author (Where do you think the word "authoritarian" comes from?) and the director. By dragging some poor audience member into the play to be mocked the actor can, in a way, punish the audience for making the actor live a life of such slavery.

When a "gentleman caller" is needed Tom drags a volunteer out of the audience to fill the role. Can it be without any fore-planning that he happened to pick a charming and experienced local actor, Michael Cassidy Flynn? Whatever the case, Flynn most impressively embraces the role--and the play comes to an unexpected happy ending when the gentleman caller proposes marriage to poor Laura.

"Bouffon Glass Menajoree" plays at the Centene through March 9.