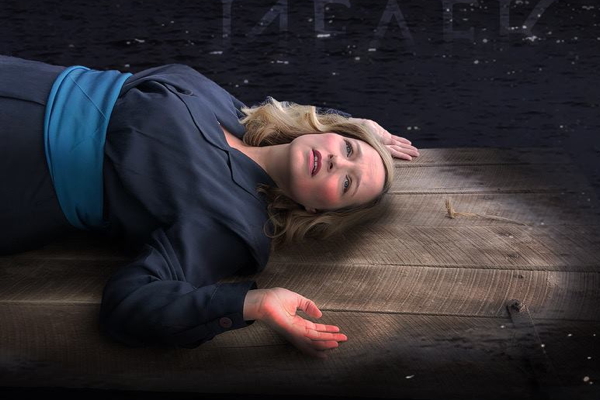 Remember Rose Dawson? You don't? Well, you're not alone. She's a woman well worth forgetting. But you could get acquainted with her again in "Never Let Go: A One-Woman Titanic," a strange little piece that was presented at The Monocle last week-end (April 18-20, 2019). It was a blessedly brief monologue by Rachel Tibbetts under the aegis of ERA. Lucy Cashion, the founder of ERA, is listed among the short cryptic credits.

It's about a supposed survivor of the Titanic (whose history is more than a little fictional).

Now Ms. Tibbetts has done some remarkably good acting with ERA, SATE and other groups. And I have more than once publicly referred to Ms. Cashion as a theatrical genius. But my high respect for these ladies bears with it a burden of candor. "Never Let Go" was a sad waste of significant talents.

The show might be embraced by zealous "Titanic" culties, but you really needed to be very familiar with that Hollywood bombshell, its characters and its scene-by-scene scenario, to understand--or to care about--what was happening on stage.

Rose Dewitt-Bukater was a pampered daughter of great wealth. At seventeen she sailed on the Titanic with her mother and her fiancé Cal. If you're like most of the world you've seen her Hollywood love-at-first-sight with Jack Dawson (a steerage passenger) and their subsequent tribulations. As a survivor she affected the surname "Dawson".

Rachel Tibbetts energetically portrayed all the self-obsession of Miss Dewitt-Bukater. The character imagines herself an "actress, equestrian, pilot, visual artist" and Oscar-winner. Her performance is filled with almost spastic leaps into histrionic poses. The Rose we see is pompous, selfish, stupid (she mistakes a Monet for a Picasso). She rants, she yells a lot. As hundreds are plunging into the lethally icy waters she is concerned only with her possible screen credits.

It's a lively show, and much was added by Will Bonfiglio as Rose's subserviant (almost boot-licking) assistant. There was a little tap-dancing, there was actor-intrusion into the audience as a "naked girl" apron was forced onto one patron so that Rose could sketch her "nude". One highlight was a lovely interpretation of "Nearer My God to Thee" by Bonfiglio, who is an adept violinist.

This slight show is, of course, a spoof. But is it really more than an encouragement for us to be even more celebrity-addicted than we are? Do we really need to pay attention to such eminently discardable peope?

ERA and Rachel Tibbets can do better than this.