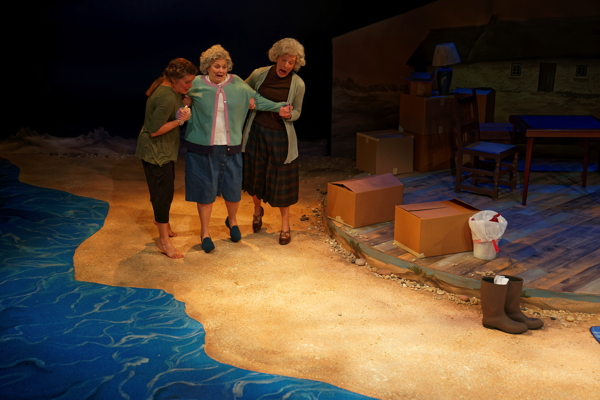 'Salt, Root, and Roe' at Upstream: Is it their mermaid blood that draws them back to the sea?

The Celtic seacoasts of Wales, Ireland and Scotland are awash with maritime spirits. The folk of those fishing villages have a deep and unforgiving bond with the sea. For centuries they have wrested their living from the sea--and lost their sons and husbands to the sea. It is no wonder that their mythic memories are full of selkies, morgens, kelpies and other tempting and dangerous sea spirits.

Upstream Theater has opened a lovely play by Tim Price. The title is from a poem by Dylan Thomas. It's called "Salt, Root, and Roe," and it is an American premiere.

Scene designer Michael Heil presents a cluttered little room in the cottage of Anest and Iola, elderly twins. In the background is a beautifully rendered thatched cottage. So at once we view the inside and the outside of these sisters' home.

The twins have gone missing. Their home is filled with cardboard moving boxes full of the old sisters' possessions. Menna, Anest's daughter, and Gareth, a local policeman, anxiously await news. The twin sisters, Iola and Anest, are recovered. Anest, it appears, had intended to help her sister commit suicide. Iola suffers from a brain tumor (though we might as well read it as Alzheimer's).

The sea is always with us. It surrounds the cramped little cottage; it murmurs as scene changes to scene.

Menna has come in desperate rescue of her beloved aunt Iola--only to find that Menna's mother, Anest, needs rescuing too; she had planned to join her sister in death. As the play unfolds we see the wreckage of Iola's mind as she loses recognition of anyone, lapsing spasmodically into her native Welsh. She is overwhelmed by paranoia and even physically attacks those who love her. Poor frantic Menna struggles to ease the situation, but often yields to a neurotic obsession to scrub the floor.

Death is approaching. In his sea-drenched poem of mourning Dylan Thomas calls death "the green unraveller." In this play we see Iola's mind unravelling, and we also unravel minor mysteries about the domestic dysfunctions in the families of Menna and her friend Gareth.

All these lives are in crisis. Menna's husband is so afraid of germs that he has not touched her in months. Gareth's wife has decided that their marriage should be an "open" one while he patiently waits for her to get over this whim. Anest seems quite content to walk into the sea with Iola though her daughter, Menna, so clearly needs her.

It's a superb cast. Donna Weinsting fills Iola with wrenching energy and fear. As Menna Amy Loui, with her usual unpretentious honesty, gets the most out of a role that the playwright has filled with a rather monochromatic anxious urgency. Sally Edmundson gives Anest great dignity and a passionate love for her sister. And Eric Dean White makes Gareth the most natural and likeable presence on stage.

But the script itself is a little disappointing. What do all these crises mean? Alzheimers is a terrible thing but it is not in itself a dramatic thing. As soon as a human problem receives a medical diagnosis it stops being a thing for drama and becomes a case history.

Dramatic possibilities abound here. The twin bond could be magical. (I thought of Chang and Eng who died two hours apart.) But it was not explored. And of course fraternal twins are common--but not on stage; stage twins are identical twins, and Donna Weinsting and Sally Edmundson could not be more totally different--in body and face and voice. What if we saw mirror images--the one whole and healthy and sane, the other mentally destroyed?

(Was the twins' grandfather really a merman?)

What could be done to make Menna and Gareth's marriage problems more than just ideosyncratic bits of dysfunction?

And most importantly, what could be done to make the wisps of poetry and the sea mythos truly the heart of this play? I felt that these things were just tacked-on decoration.

Dylan Thomas has famously urged us to "rage, rage against the dying of the light." Playwright Price, in showing the old sisters--pockets loaded with stones--walking calmly into the sea and finding that it's not cold after all, suggests that there is a time to stop the rage and "go gentle into that good night."

Upstream Theater's "Salt, Root, and Roe" plays at the Kranzberg through May 12.