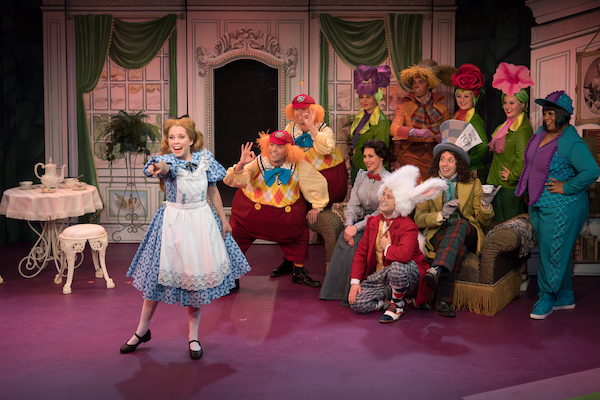 Whimsical and light, 'Alice in Wonderland' is high-quality family-friendly fun

Stages St. Louis brings the magic of theater to life with Disney’s Alice in Wonderland, a show for young audiences presented at the company’s Westport Theater. The production is a lively musical retelling of the beloved story of a young girl who follows a silly white rabbit through the looking glass. The two stumble into a wonderfully strange world filled with oddly weird and unique characters. The show includes songs, dancing, and just enough audience interaction to make it a perfect introduction to musical theater for most children two and older.

In this version, young Alice, played with a curious, beguiling nature by Alexis Kinney, is tired of being quiet at the insistence of her nursemaid Mathilda, a kind but harried woman portrayed with gentle firmness by Angela Sapolis. The bored young girl flits around her room with an air of impatience, until finally choosing to read a book, which makes her drowsy. Just as Alice is drifting off to sleep, the White Rabbit, a frantic and frenetic John Kinney, bursts in to her room, sparking Alice’s interest and leading her to follow him to Wonderland, where the real adventure begins.

This new land is unfamiliar to Alice, but she’s much more interested in finding the White Rabbit than worrying about her surroundings. She soon meets the congenial and energetic March Hare, played with a gleeful flare by Chris Tipp, and Ryan Cooper’s wacky, fumbling Mad Hatter. Though she doesn’t quite follow their logic, she gamely joins the two on their madcap ramblings through Wonderland.

Along the way, we’re introduced to Kendra Lynn Lucas as a soulful but bubbly caterpillar with a touch of fairy godmother to her demeanor. Ryan Alexander Jacobs and Austin Glen Jacobs are the mischievously acrobatic Tweedle Dee and Tweedle Dum, and they generate lots of laughter with their goofy antics. The red queen and king make their appearance, with help from Tipp and Sapolis, and a chorus of singing flowers, featuring Sapolis, Kinsey Bearman, Katie Brnjac, and Caroline Eiseman, rounds out the cast. The actors are cheerful and engaging, throwing looks and comments to the audience while they sing, harmonize, and smile through a quick one-act show.

Michael Hamilton provides direction and staging that’s reminiscent of the original Disney movie on which the musical is based, with additional choreography by Ellen Isom. The two keep the action moving and the dances lively and crisp, using a touch of slight-of-hand and theater magic to maintain interest during transitions and adding clever current references to hold everyone’s attention. Bubbles, magic tricks, and clap along moments in the songs engage the younger audience members, adding fun touches that entertain without being too over-the-top or ridiculous silly for the rest of the audience.

The show is as visually compelling as the performances. The set quickly and easily changes from a little girl’s room to an imaginative land somewhere far, far away on the other side of the mirror. Jim Sandefur’s design brims over with bold bright colors and strong visual references that are continued in the fanciful costumes by Garth Dunbar and emphasized by Jeff Behm’s warm and inviting lighting.

The performers genuinely seem to enjoy the show, grabbing onto the opportunity to cut lose in comic ways and still tell an enchanting story with a positive theme. In addition to the show, the company offers a number of activities before the performance as well as question and answer time, and the opportunity to take photos with cast members after the show. Even the company’s program is filled with activities and trivia that reinforce the show and provide a keepsake for the children.

Children will likely be enthralled by the clever dialogue, catchy songs, and abundantly joyful tone of the show; so much so that the simple but effective lesson about being true to yourself can easily sneak its way into their brains. Parents and older kids have not been forgotten, and most will appreciate the pop culture references, fast pacing, comic choreography, and high quality singing that ties the show up in a delightful bow.

Stages St. Louis production of Disney’s Alice in Wonderland is a fabulously cheerful and imaginative show and, at just around an hour in length, it’s the perfect distraction to capture kids’ imaginations and spark some creative play of their own. Adult theater patrons looking to introduce younger children to the magic of live theater will delight in their likely response to the uplifting, comically satisfying show, running through July 3, 2016.