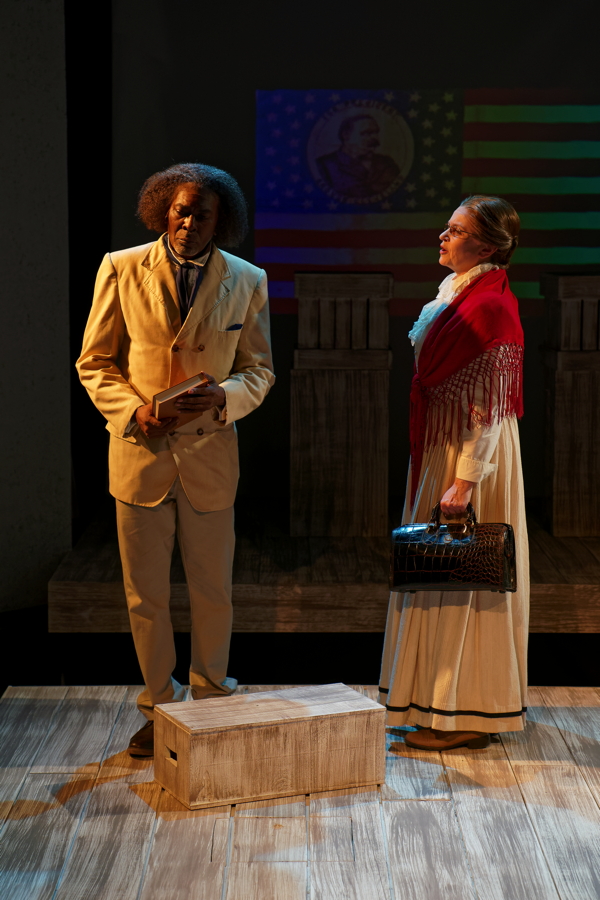 Social change doesn't just happen. Governments tend to cling to the status quo until people who are treated unfairly rise up in protest or even revolution. It takes agitators, firebrands, marching masses to change things.

For going on fifteen years now Philip Boehm's Upstream Theater has been giving us some of the finest, most thought-provoking theater in town. Now they have opened a play about two iconic American agitators in the struggle for equal rights: Frederick Douglass and Susan B. Anthony. It's by playwright Mat Smart, and it's called simply "The Agitators".

Douglass was, of course, one of the most famous figures in the movement for the abolition of slavery; Miss Anthony was a central leader in the temperance and women's rights movements. They had a deep friendship over a period of more than forty years. They shared their zealous commitment, their problems, their triumphs, their failures and the harrassments they both suffered. In the play we follow their friendship from 1849 to Douglass' death in 1895.

J. Samuel Davis returns to the Upstream stage in the role of Frederick Douglass. Once again he gives a superb performance. Davis is always a striking figure on stage, and here, in a cream-colored fashionable period suit and a better-than-perfect wig he captures the leonine image that helped make Douglass such an icon.

Erin Kelley does fine work in her portrayal of Susan B. Anthony, convincing us of this woman's utter, tireless commitment to the cause. These are two mighty figures in our history, and Upstream is to be applauded for calling our attention to them. But the script is rather weak. It's a rather familiar rehearsal of all the injustices that have been heaped on minorities and women throughout history. Both characters are shown as pretty much towers of virtue. Their dialogue, some of which must have come from their speeches, often seems little more than an exchanging of mottoes.

Now, Miss Anthony was a Quaker lady who had foresworn marriage and family in order to dedicate her whole life to the cause of equality for women. But in Mat Smart's script she seems not only a zealot but a humorless prig, filled with her own self-righteousness. Douglass, of course, was a zealot too-an untiring and blazingly articulate one. And he had a good dose of self-righteousness. But the playwright gives him a more complex and appealing personality. And Samuel Davis augments this with his own distinctive twinkle. These are great, but flawed people. Could we not have seen some of the shadows in their characters?

We ramble through the long years of their friendship, but only once does a conflict arise that properly engages our moral and theatrical interests. It's over compromise. Should Douglass support the 15th Ammendment giving the vote to black men even though it does not enfranchise women? Should Miss Anthony bring a women's convention to Atlanta even though it must exclude blacks?

The set, by Patrick Huber, is simplicity itself: two wooden-floored levels, a small ramp connecting them and several wooden boxes which are rearranged variously to serve as chairs, a bed, etc. They are very like soap-boxes, which is appropriate considering that these two people spent much of their careers atop virtual (or actual) soap-boxes. Huber also did the nicely flexible lighting.

There is occasional music throughout; some of it is recorded but much is live. Syrhea Conaway, who composed the music, plays violin in a nook at one side of the acting area. A time or two Douglass "plays" his violin, but it is Ms. Conaway who actually performs the lovely tunes. She also plays occasional background music.

Kareem Deanes designed the sound, which is generally effective. Musically, however, the show has a few eccentricities. Sometimes the live violinist cross-fades into a recording of her playing the song (a curious treatment). When she changes from violin to a modern electric bass guitar I was flummoxed. Why? A few sound cues seem a little intrusive: when someone briefly mentions ice-skating is it really necesssary to bring in some tinkley background music? But these are quibbles. Generally fine work is done by all, under director Lisa Tejero.

There is a final moving moment when Davis departs the stage, singing, with his simply glorious voice, "My Country 'tis of thee . . ." "The Agitators" continues at the Kranzberg through October 13.