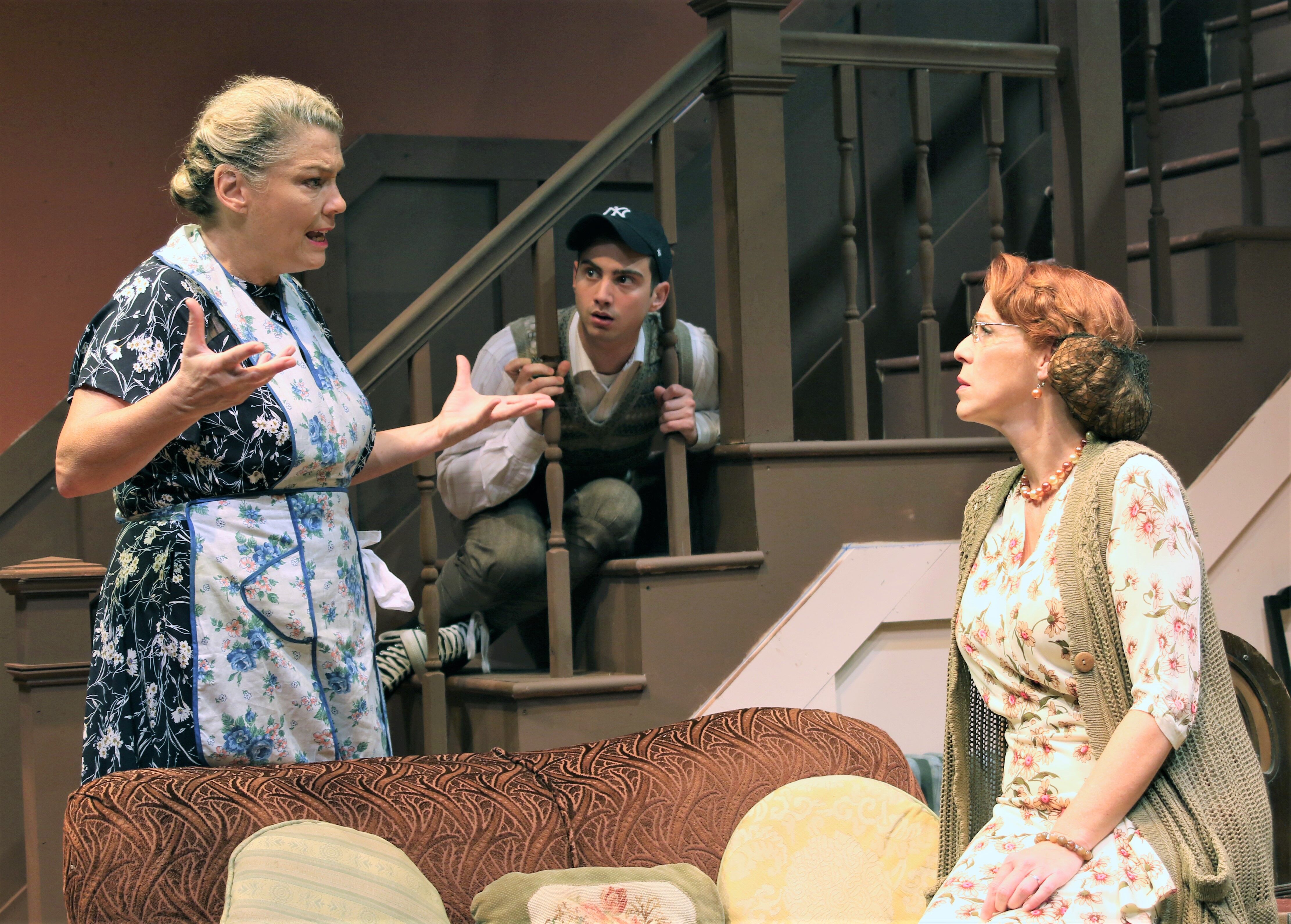 New Jewish Theatre opens their season with an excellent production of the first play in Neil Simon’s autobiographical trilogy, “Brighton Beach Memoirs.” Directed by Alan Knoll with a chatty and affectionate tone, and an eye to the laughs, the confessional tale of a teen going through puberty in the years leading up to World War II delivers plenty of family friendly entertainment. Convincing, well-connected performances and a lovingly crowded and lived in set exude the idea of a close-knit family that, while not contemporary, is immediately recognizable.

The play starts off with a bang, several of them actually, as 15- year-old Eugene throws a baseball against the side of the house while providing play-by-play narration. The repeated thumping gets on the last nerve of his mom and her sister, though -- like the show itself -- their response is generally good-natured scolding. The extended family crowds together, with Mom (Kate), Pop (Jack), Eugene and his big brother Stanley sharing their small walk up in the Brighton Beach neighborhood of Brooklyn with Eugene’s widowed Aunt Blanche and her daughters Laurie and Nora. Money is tight, but they manage to keep food on the table and the bills paid. Jack works multiple jobs, Blanche picks up sewing work and even Stanley contributes most of his salary to the household. Despite their continuous financial struggles and worries about the growing tensions in Europe, there’s genuine warmth at every turn, even the squabbles and fights are underscored with care and concern.

Jacob Flekier is outstanding as the young Eugene, and both his confidence and comic timing are perfectly suited for the witty and glib dialogue. Frequent, and often laugh out loud funny, asides to the audience combined with a tendency towards confessional over sharing, help Eugene to quickly endear himself to the audience. Flekier delivers the almost constant narration with a warm, open delivery that’s endearing; he and director Knoll keep the tone from becoming either jaded or cutesy. And, though there’s not a wide range of emotion required in the script, Flekier finds varying levels of humor, hormonally influenced curiosity and teen age incredulity in the role, ensuring the audience remains engrossed in the chatty family drama.

Jane Paradise and Laurie McConnell sparkle as Mom Kate and Aunt Blanche, their deference towards each other telling, making the moment the gloves come off all the more effective. The two sisters are close and genuinely care for each other, but it’s just as clear that the family situation adds tensions and uncertainty. Spencer Kruse is sympathetic and earnest as Stanley, Summer Baer is nicely coy and petulant as teen cousin Nora and Lydia Mae Foss perfectly straddles the fence between bratty and eager as Laurie, the over-protected, youngest child in the house. Finally, Chuck Brinkley turns in some of his best work as the exhausted, but always fair minded and kind, Pop.

Margery and Peter Spack fill the intimate theater space with the family’s home, creating a comfortably, well lived in and somewhat crowded space that helps the audience feel like they, too, are seated around the family dinner table or lounging on the stoop with Eugene and Stanley.  Michelle Friedman Siler’s period appropriate costumes have that same slightly worn but well-loved and carefully cared for feel, and Michael Sullivan’s lighting and Zoe Sullivan’s sound design add much to the tone and atmosphere of the gentle, engaging show. Director Knoll guides the show with an expert hand, ensuring the actors find every bit of humor in the script without shying away from more serious subjects, so it’s a bit of a shock when Kate and Blanche have their dust up, creating a moment of surprising intensity and uncertainty.

Eugene’s family may not look like ours, but Simon’s cleverly perceptive and universally relatable script focuses on the shared values and sense of familial love. Sterling direction and a superior cast ensure that New Jewish Theatre’s “Brighton Beach Memoirs,” which closed October 27, thoroughly entertains. The company’s next show, “Fully Committed,” starring the always-entertaining Will Bonfiglio, opens December 5. Patrons interested in thoughtful, engaging humor that seeks the heart of life, spirituality and relationships, should make sure to put the company and its always high-quality productions on their “to do” list.