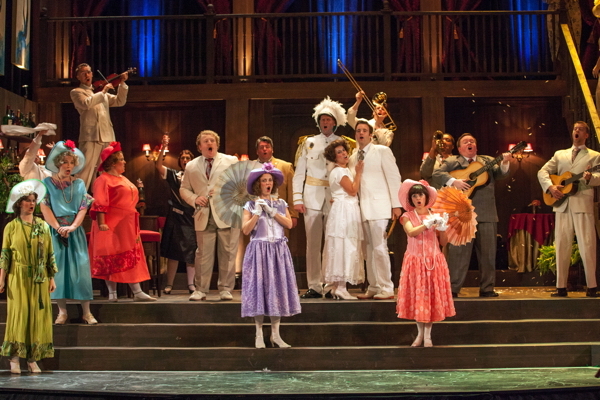 Union Avenue Opera is kicking off its season with a sparkling production of Gilbert and Sullivan's venerable comic operetta The Mikado featuring superb singing, solid comic acting, and eye-pleasing sets and costumes. As a bit of a G&S purist I have a few issues with Eric Gibson's direction, but they pale in comparison to the sheer entertainment value of the show as a whole.

The cast, to begin with, is consistently strong, all the way down to the smallest roles. As Nanki-Poo, the royal heir disguised as a Second Trombone, tenor Drake Dantzler could hardly be better, with a light, fluid voice that allows him to tune his supple song to perfection. His beloved Yum-Yum is soprano Karina Brazas, also gifted with a wonderfully flexible voice and a fine comic sense.

Baritone Andy Papas is a frenetically comic Ko-Ko, the "cheap tailor" raised to the exulted post of Lord High Executioner despite the fact that he literally wouldn't hurt a fly. He, too, has a rich, powerful voice—something you don't often hear in the "principal actor" roles in Gilbert and Sullivan. When he joins with Mr. Dantzler and Ms. Brazas in trios like "Here's a how-de-do" and "The flowers that bloom in the spring,” the vocal blend is lovely.

Resplendent in a flowing red-and-black gown, mezzo Melissa Parks cuts a commanding figure as Katisha, the "most unattractive old thing / with a caricature of a face" whose unwelcome attentions drove Nanki-Poo to flee the Mikado's court. She makes the character's frankly unnecessary Act II aria "Alone, and yet alive" more interesting than it sometimes is and she's appropriately formidable in "There is beauty in the bellow of the blast,” her duet with the hapless Ko-Ko, who has to woo her in order to save himself from a lingering death involving boiling oil. Or is it melted lead?

The title role of the Mikado isn't large. He has only two songs and the second one ("See how the fates") is often cut, as it is in this production. But bass Zachary James, who created the role of Lurch in The Addams Family on Broadway, turns his one number, "A more human Mikado,” into a real show stopper, complete with minimal but effective choreography. And that's despite being hampered with a hat that partially obscured his face.

Bass-baritone E. Scott Levin gets what is, for my money, the plum role of the snobbish Poo-Bah, the Lord High Everything Else whose family pride is “something inconceivable.” In his capable hands the character is hilariously stuffy and his solid voice handles the florid "long life to you" toast at the end of Act I with ease. Baritone Nicholas Ward, meanwhile, makes an impressive UAOT debut as Pish-Tush, providing a solid vocal anchor in "Brightly dawns the wedding day.”

Sopranos Gina Malone and Elise LaBarge are Peep-Bo and Pitti-Sing, Yum-Yum's school chums. They're both appropriately winning and Ms. LaBarge does a particularly nice job with her part of "The criminal cried," the trio in which she, Pooh-Bah, and Ko-Ko each provide self-congratulatory and wholly fictional accounts of the execution of Nanki-Poo.

The chorus is small but sings with great clarity. I don't see a chorus master credited, so I have to assume conductor Scott Schoonover gets credit for that.

Stage Director Eric Gibson is, for my taste, a bit too fond of noisy slapstick that sometimes overwhelms Gilbert's verbal humor. And while it's customary to replace the more dated jokes in the "list" songs of Ko-Ko and the Mikado, I think replacing nearly every word is a bit hubristic.

That said, he gets the important stuff right. He moves the show along at a good clip and his blocking is clear, focused, and character-driven. That's not always the case on the operatic stage, so it deserves praise.

I'm less persuaded by his visual design choices. Inspired by Jonathan Miller's somewhat controversial 1986 production for the English National Opera, which moved the action from Gilbert's colorful cartoon Japan to an English seaside resort in the 1920s, he and his designers have placed this Mikado in a "1920s cocktail hour at an English gentleman's club."

That allows Jeff Behm to create a two-level set that's visually striking, with realistic wood paneling, warm sconce lights, and even a chandelier, and Teresa Doggett's period costumes are ideally suited to their characters. It even allowed Mr. Gibson to create a nice little moment by turning that disposable second act aria of Katisha's into a torch song delivered to a handsome young bartender, who hands her a sympathetic martini at the end.

None of this, however, has anything much to do with the music or text, so it ultimately amounts to an attractive distraction. For what it's worth, I don't think it worked all that well when Miller did it, either.

On the purely musical side, Mr. Schoonover conducts his 19-piece orchestra in an expertly played and well thought out account of Sullivan's irresistible score. He took a number of optional cuts, which is fine, but I do wish he had left the charming overture intact. He deleted the entire middle section of it, as he did with last November's Yeoman of the Guard at Winter Opera. In neither case could it be considered an improvement.

But these are ultimately minor complaints of the sort which, frankly, matter mostly to G&S devotees. They certainly aren't important enough to spoil this very polished and tremendously entertaining take on one of the classics of comic operetta. Union Avenue Opera's production of The Mikado continues through July 16 at the Union Avenue Christian Church at Union and Enright in the Central West End.