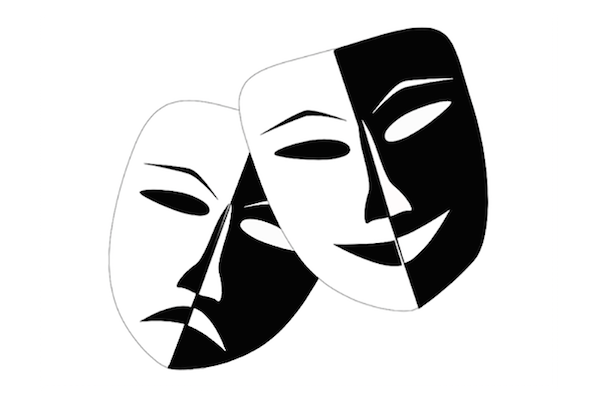 'A Company of Wayward Saints' gets lost on the way home

George Herman's tribute to commedia dell'arte, A Company of Wayward Saints, introduces a traveling theater company currently performing in Dressel's Public House in the Central West End. The rag tag group is practiced in improvisation, but audiences have been thin and the actors are weary. Harlequin, the company's manager, has received a request from a wealthy patron to present the history of man. If the show entertains, he will provide funds for their journey home.

Played with a knowing air by Michael J. Dobson, Harlequin is a man of more confidence than control, and he's desperately trying to keep his company together without letting the audience see just how fractured the troupe has become. Jane Abling plays his wife, the effectively sharp-tongued Columbina, and Ashley Netzhammer is the flirtatious and comely Ruffiana, and the two are constant rivals for Harlequin's favor.

Jonathan Meyer is exuberant as Scapino, the heir apparent to Harlequin, who's smartly countered Steve Callahan as the comically befuddled and the foolish Pantalone. Both characters are engaging and friendly to the audience, adding humor with their careless antics. Jesse Russell is a pompous Dottore, and Michael MClelland strikes just the right pose as the gallant Capitano, while Janine Norman and Joe Kercher round out the cast as the sweet, ever-loyal lovers Isabella and Tristano.

By the end of the first act, all hope seems lost and the company abandons Harlequin, leaving him to beg the audience for patience. If they want to get home again, the actors must put aside their overblown egos and petty squabbles to please their benefactor. The device works perfectly as act two opens with the actors slowly returning to the stage and somehow managing to deliver a compelling, touching show while also reigniting their passion to perform.

The best scenes of the performance are in the second act. Kercher is warm as an expectant father, getting coaching from Dobson. Meyer and Netzhammer are genuinely watchable as a flirtatious couple that finds love in their desire to skip school and get on with life. Finally, Abling and Callahan delight as two older singles trying to make a match for his daughter but instead finding love of their own. These three scenes are the highlight of this production, particularly the adolescent and marriage broker scenes. It was here that I felt the most connection between the actors, and a deeper appreciation for the artifice of the show. Herman's script is smartly structured: the first act hints at certain expectations that the second act fills with heartwarming stories.

Unfortunately, these few scenes are not enough to ensure the success of the show. Frankly, the production feels under-rehearsed and somewhat sloppily performed, and the cast is at times unfocused. There are multiple noticeable mistakes and several of the actors look literally lost on the small stage. Finally, a sense of emotional connection, either to the characters or story, is missing, leading me to occasionally lose interest.

At times, the solution is as simple as considering the angles of the performance floor, obstructions, and seating placement in the room. At other times, more attention to craft is required. Certain ensemble members appear disinterested except when delivering their lines and the connection between dialogue and meaning goes missing.  Still, there are a number of enjoyable, entertaining scenes, and the cast seems eager to please and improve.

Cocktails and Curtain Calls production succeeds in conveying the rudiments of comic improvisation without quite getting the internalization part of acting. Director Don Krull has a good script, an eager and willing cast, and a smart idea. Marie Moore's costumes and Marjorie Williamson's masks are delightful, adding much to the visual sense of the show's era and characters. What seems to be lacking is the commitment to story, which necessitates deeper analysis and character development.

At the end of the night, A Company of Wayward Saints, running through July 17, 2015 is a charming nod to the comedic arts. The cast delivers an enjoyable, if flawed, production that is certain to improve throughout the show's run.