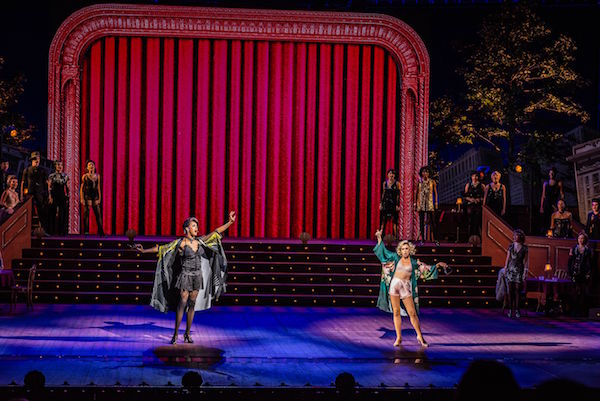 Velma Kelly and Roxie Hart. The femmes fatales are the center of Fred Ebb and Bob Fosse’s wickedly fun musical “Chicago,” with music by John Kander. And the mention of their names stirs up feelings of scandal and excitement for those familiar with the story.  In The Muny’s current production, J. Harrison Ghee and Sarah Bowden deliver knockout performances as the scheming starlets who will do almost anything to keep their name in the tabloids.

Velma Kelly, accused of murdering her husband and sister after catching them together, is the queen of the cell block. Represented by the legendary Billy Flynn, her name and picture are splashed across every newspaper in Chicago. A lesser-known vaudeville performer turned into a tabloid celebrity with dreams of becoming a star. And she loves the attention, until Roxie Hart comes along and starts stealing the headlines. Flynn and Matron “Mama” Morton exploit the two for their own fame and fortune, and poor Amos, Roxie’s husband, may be the only honest character in the show. The conflict between the women creates sparks, punctuated by big production numbers filled with athleticism and humor.

From the opening “All that Jazz,” framed by a snappy introduction from Stage Manager Michael James Reed, to the closing trio of “Nowadays,” “Hot Honey Rag” and the finale, the show is non-stop action interspersed with humor and sensuality. Even the scene changes are well-choreographed chaos, an apt characterization of a bustling Chicago in the late 1920s, filled with gangsters, speakeasies, molls and vaudeville. Tabloid journalism was still new and growing in popularity, and sensational crime stories were entertainment for all.

Ghee and Bowden are physical contrasts, one tall and statuesque with a commanding presence, the other a petite firecracker with a more flirtatious personality. Vocally, Ghee is stronger and more consistent in the contralto range, while Bowden is a true, effortless soprano – and neither of them lacks power. The differences add visual interest and comic possibilities, though director and choreographer Denis Jones and the actors make certain not to overplay their hand. Whether standing back-to-back or strutting down the stairs in a duet, the stage pictures the two create effectively emphasize the differences in the characters.

The lead actors pair well against each other and in their interactions with the rest of the cast. With a purposeful and conniving touch, Bowden softens Roxie’s edges, but only when it suits her scheming. She’s vivacious and off-the-cuff, but she’s not a dumb blonde; unless she wants to be. Ghee’s Velma wears an air of sophistication with a dismissive gesture and well-practiced world-weary sigh. Audience members cannot be faulted for wondering why Ghee was cast in a role traditionally played by a female identifying actor. The question is valid and the casting non-traditional. However, from the very first purring notes of “All That Jazz” through the up-tempo swing of “Hot Honey Rag,” Ghee fits the role to a T.

The two are well supported by Adam Heller as the lovelorn and easily persuadable Amos Hart, Emily Skinner as Matron “Mama” Morton, a woman with connections for a price, and James T. Lane as the flamboyant Billy Flynn. Ali Ewoldt is comic as Mary Sunshine, and she delights audiences with a truly impressive sustained high note in “A Little Bit of Good.” Madison Johnson, Taeler Cyrus, Veronica Fiaoni, dance captain Lizz Picini and Carleigh Bettiol tease and mesmerize with Ghee in “Cell Block Tango,” ensuring the number is the memorable standout it should be.

The story arc is fun, and Velma and Roxie's snarky competition for attention is full of attitude and sass. But it’s the musical performances -- the show stopping numbers and more personal songs like “Mr. Cellophane,” featuring Heller’s Amos as a sad clown who retains a ton of charm -- that keep audiences returning to the show. “All I Care About,” featuring Lane’s Flynn and Ghee’s “I Know A Girl” are other examples. Among the full ensemble numbers “Tap Dance” and “Razzle Dazzle” are additional big, exciting numbers. The ensemble songs sparkle with sharp, precise choreography by Jones that delights.

The quick stepping, high drama musical ‘Chicago,” continuing through September 5, ensures that the 103rd season of the Muny closes with a bang. The popular musical draws audiences in with scandalous tabloid stories of adultery, deception and murder. Characters Kelly and Hart compete to be the queen of the tabloid murderesses with a ferocity that’s mirrored in the spectacular dance numbers. Ghee and Bowden are in top form, holding the crowd in the palm of their hands from the first note to the final bow. The production is full of flash and pizzazz, ensuring the over-the-top show remains a crowd-pleasing favorite.