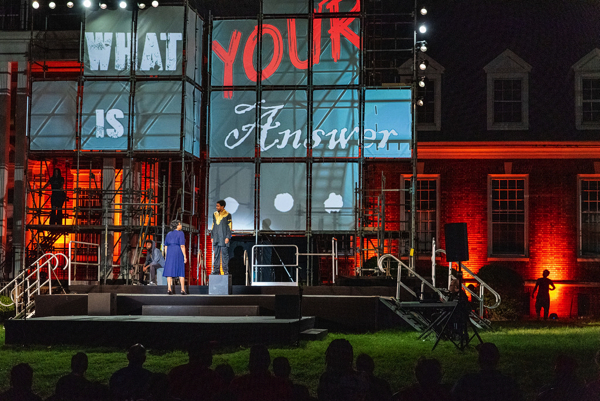 The Ville’s Past Lives on Through Shakespeare in the Streets

“The Ville: Avengeance!” takes the “to be or not to be” question of “Hamlet” and shifts it from an individual to a community: St. Louis’s storied Black neighborhood, The Ville.

Mariah L. Richardson’s new script successfully provides a history lesson of The Ville for those who don’t know its past while simultaneously giving voice to residents past and present. Adeptly directed by Thomasina Clarke in The Ville itself, the production by the Shakespeare Festival St. Louis unified community engagement and theatre.

“The Ville: Avengeance!” is another wonderful example of STLShakes adapting a classic play to fit the times while creating a production by and about a particular St. Louis neighborhood. Residents of the neighborhood contribute to all aspects of the production, including, in this case, the Sweet Tooth BBQ food truck and other local vendors. This, combined with the music of famous Ville residents, such as Chuck Berry and Tina Turner, gave the play the feel of a fantastic block party.

“The Ville: Avengeance!” sees three ghosts from the neighborhood interact with the present-day characters Hamlet (Brandon Ellis) and Heratio (Victor Mendez). Hamlet has returned to the neighborhood to decide wether or not to live in his grandfather’s house despite the neighborhood’s current reputation. Alex Jay expertly plays the Narrator with fluid movements and a deeply expressive voice. Tylan Mitchell plays Hopeless, a recently murdered young man whose name represents the feelings that led him to his end and against which Hamlet must fight. Michelle Dillard plays the ghost of Annie Malone—one of the most successful founders of The Ville—with great dignity and passion. Dillard’s acting sustains the production’s most profound questions: what happened to the neighborhood and what will we do about it? Arthurine Harris and Carl Overly Jr. gamely portray two flashback romances from the neighborhood’s 1950s and 1980s.

The production took place on a three-story high set of metal scaffolding and screens for projections in front of the Annie Malone Children’s Home. In addition to the script, the production boasted two musical interludes from The Legend Singers . This choir, founded in The Ville by Dr. Kenneth Brown Billups in 1940, was a highlight of the evening.

While the neighborhood itself was part of the production’s ambiance, the scene design by Margery and Peter Spack provided a wonderful space on which director Clarke could tell the story. It included not just the high scaffolding, but also a low stage that thrust out close to the audience, allowing characters to address the spectators directly from up close, or from on high. The Spacks also designed the projections, which varied from the abstract, to historical newspaper stories, to closeups of a hamburger so beautifully rendered that I could taste it. The costumes by Hatsephi Kushma were primarily based on the period in which the character lived and helped the storytelling by keeping the audience attuned to who lived when. The lights by Bryant Powell did a great job focusing the audience’s attention, using tight spotlights on characters on the high platforms. The music, composed and directed by Tre’von Griffith, enhanced the experience significantly by adding emotional depth and aiding transitions.

In all, the play told the history of The Ville, but also promoted community engagement and voting. On the night I saw the play, Congresswoman Cori Bush was in the audience and spoke afterwards to importance of this neighborhood, and to cultural experiences like this one. Richardson’s script, Clarke’s production, and St. Louis Shakespeare Festival’s expert community engagement combined beautifully to create a memorable experience.