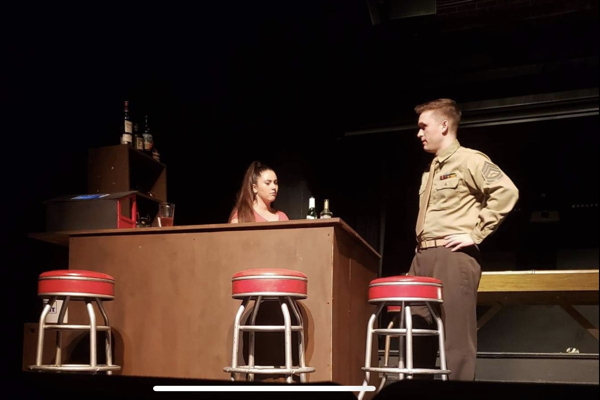 'Hoist' at Tesseract Theatre lifts a toast to US. female veterans

"Hoist," by Erin Lane, is a naturalist play that allows you to spend two hours in the lives of characters in desperate circumstances. Lane's background is in Chicago-style improv, and her earlier play "Jersey Shore: The Musical" ran to acclaim for a year in Chicago, but the tone of "Hoist" is a one-eighty. "Hoist" is a serious, intimate, slice of life following a traumatized female veteran of the Afghanistan war and the walking wounded around her in a Chicago dive bar. "Hoist" also has a strong pedigree of development, including a reading in the 2015 Great Plains Theatre Conference, leading up to its first production in the inaugural Tesseract Festival of New Plays.

The play follows a bartender, Skyler, who drinks as much as she serves, and the few denizens of the bar she inhabits. An Afghanistan War veteran, the play ironically depicts Skyler working on Veterans Day on and on hold for the entire two hours with Veterans Affairs trying to get the funds to take her medication. The bar's owner, a regular, a new bartender, and someone from Skyler's past, round out the day, which ends in tragedy -- at least for Skyler. Thanks in equal parts to the writing, direction, and acting -- particularly that of Rachel Bailey as Skyler -- the production has some of its most moving moments when characters are onstage alone. The play's last 90 minutes, in particular, are gripping, once a second ominous envelope is introduced to Skyler's life.

Without giving away too many of the play's reveals, "Hoist" powerfully addresses the rampant problem of sexual abuse in the military, going into painful and realistic detail. "Hoist" also depicts the way women can be abused by parents, by bosses when the financial situation is desperate, and by lovers when loneliness grows too powerful. But, for me, one of the most powerful statements in a play full of import, was that even the supposed "good guy" in the play abused his power by marrying his daughter's babysitter. But, to make sure I do not give the wrong impression, this play was not a didactic lecture about gender inequality. It was a beautiful piece about deeply hurt characters.

The direction by Kevin J. Bowman provided the cast opportunities to show their characters through subtle gestures, and to inhabit the netherworld of the bar. The pacing of scenes, however, was quite slow, and the production would have improved if characters dialogue had less gaps between lines. The set by Katie Palazzola was simple and effective, and a step up to a slightly higher level provided the character Bianca a fantastic obstacle to overcome with her walker, played with magnificent tragedy by Dana Wachtel.

"Hoist" is a sincere, powerful, moving piece of naturalistic drama that allows audiences to feel the raw emotions of these wounded characters.