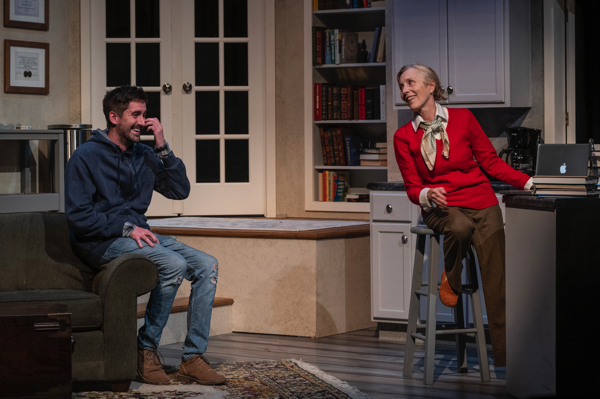 Dis-'Comfort' rends a Labute premier at the Gaslight

A world premiere by a very hot American playwright is quite a coup for a very small St. Louis theater. But William Roth and his Saint Louis Actors’ Studio at the Gaslight Theater have a special relationship with Neil Labute. They have produced several of his plays and they sponsor a “Neil Labute Young Playwright’s Festival”. So Labute’s new play, Comfort, premiered there last Friday.

He’s a lucky playwright to be produced by a company with such devotion and with a history of drawing splendidly talented actors. In this two-character play both players are at the top of their form.

The setting is a home in up-state New York. Scene-designer Patrick Huber does miracles on that tiny stage. He gives us a quite realistic kitchen and living room with French doors. Time and again, since the Gaslight’s earliest days, Huber has worked that magic; it’s like pulling a very large rabbit (think Harvey) out of a yarmulka.

At curtain-rise the home is being broken into. A young man climbs in a window and begins to search around. But then the owner returns. We find that she is his mother—and they are long estranged.

She is Iris Banks, a three-time Pulitzer winner and a potential Nobelist. She is a great writer, and she is the very first to tell you so—again and again and again. Iris is played by Kari Ely, a fine and familiar talent on our stages. Spencer Sickmann plays Iris’s son, Cal. Both give truly outstanding performances—committed, real, often fierce. It must be an exhausting evening for them, the play being so full of violence—both emotional and (in one great brawl) quite physical.

It seems that when Cal was ten his mother “pulled a Nora” on him and his father. Like Ibsen’s notorious lady she slammed the door on her stifling family and went out to make her own way in the world. It was a nasty divorce and little Cal, under pressure, opted to stay with his father. That was a choice for which his mother claims to have never forgiven him—even though she confessedly could not have achieved her great success without her freedom from children.

There is an old secret buried in the roots of this play. Iris’s first huge hit was a novel, The Iron String. In the divorce proceedings her husband claimed the novel as his creation—at least partially. Iris insisted then, as she has repeated ever since, that the novel is hers, hers, hers! Only and entirely HERS!!

Cal, her son, is something of a loser. Pushing forty, unfocused, he is sort of trying to be a writer, but he never finishes anything. His mother has occasionally (and begrudgingly) given him financial help. But now he’s onto something. He plans a book which will prove that his late father did have a seminal hand in The Iron String. This would be a great threat to his mother.

Arguing ensues. And arguing. And arguing and re-arguing! Angry voices are raised. (It almost reminded me of the old-time radio comedy “The Bickersons”.)

But again there arises more angry re-arguing and shouting and re-re-arguing. Both are self-pitying, both are self-justifying, both claim to have been the more virtuous.

Iris is a really terrible person. She simply cannot speak without denigrating her son. (And yet, alone at the close of the first act, she emits a mysteriously motivated yet heart-breaking cry of grief.)

On both sides the dialogue is heavily laced with foul language. Very quickly the obscenities lose all their dramatic punch. Moreover, they suggest a paucity of vocabulary in these very literate people. (George and Martha would never behave so.)

When Cal and Iris grapple all over the stage in a frantic physical fight I was reminded of the quite gratuitous violent tumbling fight between Violet and her daughter in August Osage County. When I want “wrassling” I’d prefer to go to the Chase.

If Iris is rather too terrible, I think Cal is rather too sane and rational. If he were more unstable, more erratic—if Iris had some fear of him? That would support the emotional violence between them. What damage has Cal done, what threat has he made in the past to cause his mother to change the locks on her doors?

So, despite some very fine acting and technical support, I have problems with Mr. Labute’s script. Now I recall being deeply impressed some years ago with his short plays (grouped as Bash) and with The Shape of Things. But since then he’s had his good days and his bad days. Always controversial, mostly (God bless him) politically incorrect — but some good, some bad. (His film script for the remake of The Wicker Man was an unforgivable travesty.)

I think "Comfort" needs a lot of work.

It’s a good exciting evening, but a very flawed script. It continues at the Gaslight through December 19.