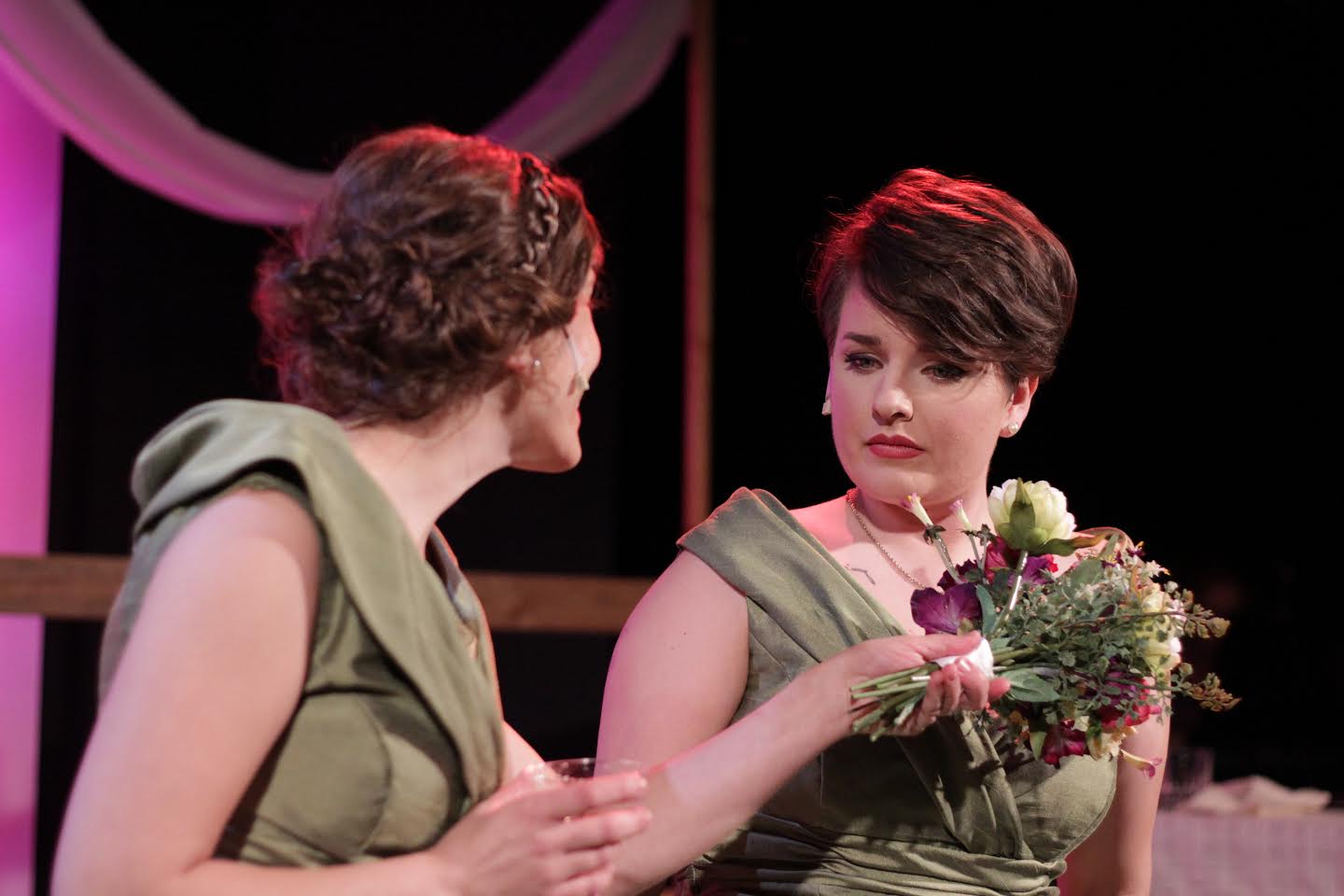 R-S Theatrics current production, Love? Actually..., is most decidedly not a Broadway musical style interpretation of the popular British romantic comedy from 2003, though both shows are thoroughly entertaining. To be fair, both are also focused on the struggles present in the quest for romantic satisfaction. But where the movie is a sweet trifle filled with happily ever after and covered in sprinkles, the company's Love? Actually... takes a revealing peek into all the ways the utterly human concept of love can miss its mark.

Director Christina Rios and musical director Leah Luciano have put together an evening of completely engaging entertainment that looks at love from the failed perspective. The production is a three-act musical, with independent but related parts, beginning with a clever five-song cabaret. The second act moves to Steven Serpa's effectively sentimental opera Thyrsis & Amaranth, and the third act brings the evening to a close with Lin-Manuel Miranda's catchy and provocative 21 Chump Street.

This Love? Actually... explores the painful stories -- the missed connections, the failed chance to say I'm sorry, the fights, the breakups, the regrets, the love that goes unrequited or unspoken -- that reveal the depth of longing and commitment. Just like love itself, the audience is both surprised and intrigued by the unexpected unfolding of the first act performances. Five randomly selected patrons are invited to the stage to select the two solos, two duets, and group numbers to be performed during the cabaret from three separate bowls. The performance I attended included solos from Phil Leveling and Kelvin Urday, duets from Lindsay Gingrich and Sarajane Alverson and Urday and Natasha Toro, and an exciting group number by Miranda.

The songs are a mix of show tunes and popular music, and I appreciated the variety as much as the interpretations. All the performances are emotionally connected, well phrased, and vocally solid, my only objection to the first act is proximity. It is difficult to see the expressions and physical interpretation of the songs when the performers are standing right on the edge of the stage, I noticed several other patrons stretching to see as well.

The second act, Thyrsis & Amaranth, is a powerfully emotional contemporary opera in English that features the spectacular and mesmerizing voices of Gingrich and Eileen Engel in the title roles. In the garden after a wedding ceremony, Gingrich longs to express her feelings for Engel while Engel fancifully imagines herself the bride and center of attention at a ceremony of her own. The two friends chat about love and, just as Gingrich is about to reveal her heart, Engel crushes her by confessing the object of her love and affection. The wedding reception dumb show continues in the background as the two women tackle a number of difficult operatic runs like seasoned pros, creating the pleasant sensation that we are eavesdropping on the most elegantly delivered tête-à-tête.

Urday shines in the third act as a high school senior with good grades and a clear path to college and a better future who gets sidetracked by his infatuation with the new girl in class. He falls for Toro's character, who just happens to be an undercover cop with an overzealous commitment to making a difference in the War on Drugs, even when it harms someone else. Toro counters Urday nicely with her vocals, and she convincingly conveys her character's passion for her cause in a way that deftly foreshadows the story's conclusion. Though a bit thin in spots, the songs and story in 21 Chump Street showcase Miranda's style, wry observational wit, and trajectory and are nicely voiced by the talented cast.

In addition to the ensemble members featured above, Kevin L. Corpuz and Omega Jones added their talents to the production but didn't get their name pulled for the cabaret, while production manager Colleen Backer entertained with a cameo appearance and humorous monologue. Taylor Pietz assisted with smart choreography that made effective use of the tight space, while Keller Ryan, Nathan Schroeder, Amy Harrison, and Mark Kelley added nice touches with the set, lighting, costume, and sound design.

The music is the play in R-S Theatrics tasty sampler of three short acts exploring the darker angles of our unceasing infatuation with love and romance. Love? Actually... running through September 18, 2016, is perhaps the most satisfying and enjoyable musical about the downside of love you'll ever see, and definitely worth the visit to the re-opened Westport Playhouse.