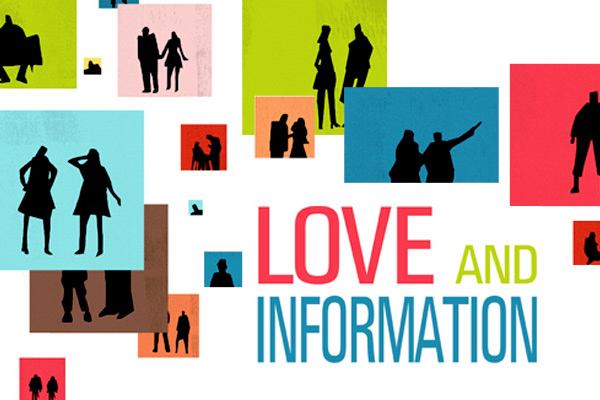 I know and like such Caryl Churchill plays such as Cloud Nine and A Number and Top Girls and Serious Money. I like the way that they deal with serious topics in imaginative and unusual theatrical ways. They amuse and they stimulate thought. They amuse by stimulating thought. What more could you want in the theatre?

But I have my doubts about one of her latest plays, Love and Information (2012), currently being performed under Andrea Urice's direction by a cast of fourteen students in the A.E. Hotchner Studio Theatre at Washington University. Love and Information presents over 50 scenes in 90 minutes.

I say "scenes" but they're really more like brief blackout sketches. Some are only a couple of sentences long. Some may go on for two or three minutes. They are epigrammatic. They pack wit and pathos into their brief life on the stage. Some are funny, more are ironic, some sad.

They do make the point that many of their characters, like many people today, are awash in a flood of information coming at us in all directions. But that's hardly an original observation. And they do sometimes suggest that our ability to connect with others -- to love even -- as in the title, can be negatively affected by all these distractions. Again, that's hardly an original observation.

I did enjoy these vignettes. But they flew by too quickly for me to develop any sympathy or identification with one of the characters and thereby to find any deeper feeling and meaning in what was happening.

The production continues at Washington University through April 10 with afternoon and evening performances. Tickets may be purchased through the box office at 314-935-6543 or online through Vendini.