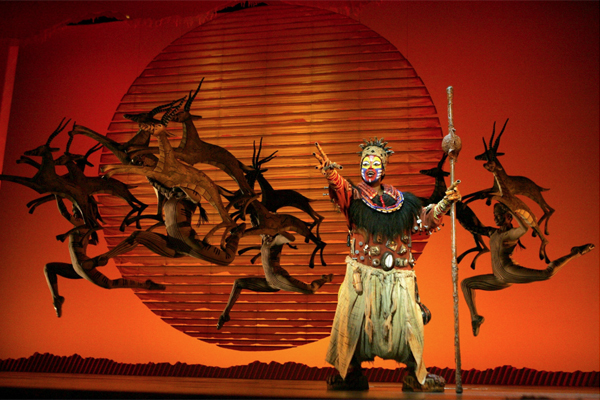 A Feast for the Eyes: 'The Lion King' at the Fox Theatre

As I've experienced each time I've seen a Disney animated film translated to the stage as a musical, no expense has been spared in making it larger and more impactful than life. This is certainly the case with "The Lion King," released as an animated film in 1994, some songs and lyrics by Elton John and Tim Rice.

In prose form, the whole of "The Lion King" would be an extremely simple and short story. But, in Disney's hands, "The Lion King" is two plus hours of fantastical costumes and clever puppets, stirring singing, massive moving set pieces, colorful and whimsical costumes, imaginative choreography well-danced, and characters clearly drawn. I'm not sure why, but I was so bowled over I started crying at the opening number, it was so very moving.

The lion Mufasa (an imposing Gerald Ramsey) is the king of the Pridelands, presenting, with monkey Rafiki's (Gugwana Dlamini) help, his new cub, Simba (Jordan Pendleton) to his entire kingdom. All bow and rejoice, save for the King's unctuous brother, Scar (Spencer Plachy, wow), who not so secretly would love to rid the world of his brother and that upstart heir who is keeping Scar from his "rightful" place as king. By duping the foolish young Simba, who "can't wait to be king," Scar does kill his brother and blames Simba, who runs away in shame. In exile, Simba befriends Timon (Nick Cordileone) and Pumbaa (John E. Brady) who live life with "Hakuna Matata," no worries. As Scar and his accomplices, the Hyenas, destroy the Pridelands, young lioness Nala (Kayla Cyphers) sets off to find help, finds the long-missing and now grown Simba (a powerfully-voiced Darian Sanders), and, with Rafiki's help, convinces him to return to the Pridelands and become the king he was destined to be. Of course, in that special Disney way, the villain is overthrown, Simba and Nala mate, and a new generation joins the "Circle of Life."

Director Julie Taymor has pulled out all the stops with the resources she was given. The actors are all professional (I loved the way Scar kept his disdainful sneer even through the curtain call!), the lighting complementary, the sets (constructed of lumber and plastic and even ensemble actors) impressive, the orchestra and a couple of outboard music stations supportive, and the costumes colorful. However, it was the various actor/puppet/animal constructs that truly made "The Lion King" special. To see a life-size "elephant" coming down the Fox aisle, gazelle's leaping across the stage, giraffes and pumas plodding the earth, and birds filling the sky, was uplifting. Special kudos to those actors who were the animating force for their puppet alter egos. I never QUITE forgot there was an actor behind those characters, but in some cases the actor disappeared into their bits of cloth and plastic (meaning in the main Jürgen Hooper as the bird Zazu, excellent).

The only down side to the whole show, as usual, was the Fox and its known acoustical negatives. Any song with the orchestra full out, and more than one person singing, was an indistinguishable garble of the lyrics. I swear I understood the words in only half of the numbers. I'm going to have to listen to the cast recording to find out what was actually being sung. However, the applause from the audience—that I estimated about one quarter kids—was loud and sustained, and came frequently, so, a good time was had by all.

"The Lion King" runs approximately 2 hours and 30 minutes including intermission. It will be on stage through June 19, 2022. Visit The Fabulous Fox web site for more information.