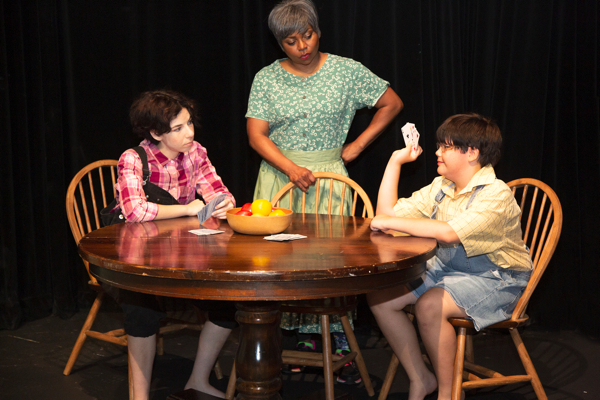 The Clayton Community Theatre continues its lovely tradition of presenting too-soon-forgotten masterpieces from the American canon.  They’ve opened a strong production of Carson McCullers’ "The Member of the Wedding."  It’s skillfully directed by Mark Neels.

It’s set in a small southern town, in 1945.  The central characters are a twelve-year-old girl, Frankie Addams; her seven-year-old cousin, John Henry, who is her only real friend now; and Berenice Sadie Brown, the family’s black cook, maid, house-keeper—and, essentially, mother to Frankie.

This play (adapted from her novel by McCullers herself) opened on Broadway in 1950.  It starred Julie Harris as Frankie, Ethel Waters as Berenice, and the young Brandon De Wilde as John Henry.  It was made into a movie (with those same actors) in 1952;  it became an off-Broadway musical briefly in ’71;  there was a TV production in ’82, a Broadway revival in ’89, a movie re-make in ’97, the Young Vic revived it on-stage in 2007, and it is still frequently done in regional theaters.  So the story has “legs”.

It is a lovely, gentle, intimate, and almost magical look into the heart of this quite eccentric young girl.  Frankie, who suffers greatly from loneliness and the confusion of adolescence, yearns desperately to belong—to become one of a “we”.  Thus, she falls into an overwhelming puppy-love with a wedding—that of her older brother, Jarvis, and his fiancée.  Frankie convinces herself that she is going to go with the bride and groom on their honeymoon trip to Alaska.  Her eventual disappointment arrives, of course, though it travels through troubling mists of racial and gender doubt and stress.

The glowing center of this production is Victoria Pines, as Berenice.  She’s quite wonderful.  Strong and loving, she strives to deal with the troubled Frankie, as well with her own younger brother’s problems.  What a delight when Ms. Pines breaks into song!  Her beautiful voice, singing “His Eye is On the Sparrow”, is just as moving as Ethel Waters in that film I saw many decades ago.

Theo Kronemer plays Frankie, and fills the role with immense energy and angst, but has the quite irritating habit of delivering every line directly to the audience.  No matter whom she is talking to, this Frankie quickly turns down-stage to look straight at the audience.  And far too often she simply shouts.  These are simple problems with which director Neels should have helped the young actress.

Strong performances are also given by director Mark Neels (as Frankie’s rather distant father) and by Jackson Gress and Ellie Taylor as Frankie’s brother and his bride.

The lovely set—a homey kitchen and back yard—was designed by Andrew Carey.  Costumes, by Jean Heckmann, are nicely fitting to the time and place.  Nathan Schroeder’s lighting is gracefully done.  And sound-designer Gene Rauscher chooses pre-show and intermission music that is quite perfect for this gorgeous, sweetly dark play.

"The Member of the Wedding" continues at the Clayton Community Theatre through June 12. More information is available at their web site.