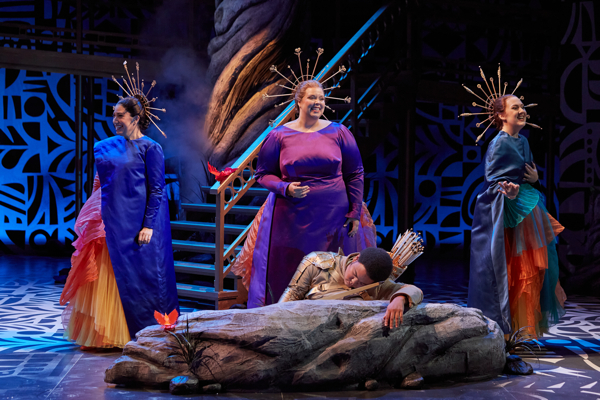 Could it be magic? Opera Theatre's 'Magic Flute' pushes the envelope but keeps the enchantment

Opera Theatre of St. Louis (OTSL) has had a long and mostly happy history with Mozart’s final opera “The Magic Flute.”  The current production, which runs through June 26th, is the fifth in the company’s 47-season history and one of the most entertaining, even if it does flirt with revisionism a bit.

Written towards the end of the composer's sadly brief life (Mozart had only a few months to live when it premiered in September of 1791), “The Magic Flute” is a singspiel—the 18th century equivalent of a present-day musical—set in a mythical land of monsters and magic. The protagonists are Prince Tamino and Princess Pamina, who find themselves and the less-than-heroic bird catcher Papageno caught up in a war between The Queen of the Night, Pamina’s mother, and Sarastro, High Priest of the Sun.

The Queen and her three Ladies con the young prince into believing Sarastro is an evil wizard from whom Pamina must be rescued. Arming Tamino with the titular flute and Papageno with a set of magic bells, they summon a trio of Spirits to lead the lads to Sarastro’s temple.

Shortly after arriving at the temple, Tamino realizes that he has been played and that Sarastro actually wants  to end the Queen’s reign of eternal night and usher in a new age of light, wisdom, and brotherhood. Furthermore, he wants the lovers to undergo the purification of trials by fire and water so that they can marry and replace him as equal rulers of the Temple of the Sun. Which, with the aid of the flute’s magical melodies, is exactly what happens.

Essentially, it’s the age-old story that Joseph Campbell would later codify as “The Hero’s Journey,” with a  heavy dollop of Masonic symbolism. Both Mozart and his librettist Emanual Schikaneder (who also produced the work’s premiere and played the role of Papageno) were Masons and wanted the work to reflect Masonic values—which is to say, the values of the Enlightenment. Indeed, as Peter Branscombe and Stanley Sadie have written, “The Magic Flute” is "above all an opera of the Enlightenment. In it, the forces of darkness and light are counterposed: the former in the person of the Queen of the Night and her entourage, the latter in that of Sarastro and his priestly community, which erects temples to Wisdom, Nature, and Reason."

Director Omer Ben Seadia puts her thumb on the ethical scale a bit by suggesting, as related in her program notes, that the Queen and Sarastro represent “two equal and competing forces.” Both are “determined to secure their legacies but, in the process, they managed to leave the ground beneath them scorched and barren.” In this context the struggle is seen less as one of reason and freedom vs. superstition and autocracy (i.e. Enlightenment vs. Medievalism) and more as a generational conflict in which the lovers must “decide for themselves how to reshape the nature and the character of the world.”

That sounds revisionist, but practically speaking this “Magic Flute” is still a story of the journey from darkness and deception into light and truth. The moment when, after the Queen and her minions are routed, Ryan Howell’s desolate and monochromatic set suddenly blossoms with color and golden light is still a powerful affirmation of the transformative power of love.

If that all sounds a bit weighty, fear not. Mozart and Schikaneder set out to entertain as well as educate, and this new English version, with dialog by Ben Seadia in combination with earlier translations by Andrew Porter and Colin Graham, retains all the comedy, fantasy, and romance of the original. Howell’s sets, Jessica Jahn’s inventive and colorful costumes, and Christopher Akerlind’s lighting all combine to create a fanciful atmosphere.

That said, a few of Ben Seadia’s additions sometimes sound a bit too contemporary. Adding same-sex relationships to the lyrics of Papageno and Pamina’s Act I duet extolling the joys of love, for example, might be seen by some as a bit too 21st century. Still, I suspect politically liberal Mozart would probably approve.

The cast is generally a strong one, as is often the case at OTSL. As Papageno, baritone Jonathan McCullough’s clear diction, impeccable timing, and just the right amount of shtick make him immediately appealing. He is the perfect fumbling foil for Joshua Blue, whose big, clear tenor and stalwart sincerity make him an ideal Tamino. Soprano Erica Petrocelli is an appealing and vulnerable Pamina.

Bass Adam Lau radiates calm authority as Sarastro and projects even the lowest notes effectively. Tenor Christian Sanders brings just the right mix of despicable lust and comic incompetence to the role of the Monostatos, whose attempts to have his way with Pamina end badly for him. The staging of his punishment as a violent stomping by some of the monks, however, feels gratuitous and weirdly out of synch with the rest of the production.

Soprano Jeni Houser handles the Queen of the Night’s two big numbers with ease, hitting all the unnervingly high notes with accuracy and clarity. But either her voice lacks power or she has been directed to dial it back. The result, in any case, is that her character feels as pallid as the plain white gown she wears in Act I. Is this, like the oddly brutal punishment of Monostatos, a directorial attempt blur the difference between the Queen and Sarastro by softening her image and hardening his? If so, making the character less powerful also makes her less interesting and somewhat blunts the effect of her famous Act II “revenge” aria.

Speaking of the Queen, here’s a bit of applause for the way soprano Meghan Kasanders and mezzos Meridian Prall, and Stephanie Sanchez turn each of the Queen’s Three Ladies into distinct, fully realized characters. They harmonize beautifully  as well.

Seán Curran’s choreography is inventive, but the ritualistic movement he has given the temple monks in all their appearances sometimes feels unnecessary and even distracting. Less would have been more here.

Rory Macdonald conducts members of the St. Louis Symphony Orchestra in a clean, clear, and smartly paced reading of the score. The overture was particularly impressive, with the fugal sections impeccably precise. A tip of the hat is also due to Damien Krzyek, whose glockenspiel serves as the voice of Papageno’s magic bells, and to SLSO flutist Jennifer Nitchman. Kevin J. Miller’s chorus sings with the same power and clarity that it displayed in “Carmen” on opening night.

New York Times critic Charles Isherwood once wrote that “the first responsibility of the director should be serving the musical drama,” and while Ben Seadia’s concept of “The Magic Flute” pushes the envelope a bit, I think it ultimately remains true to the spirit of the 18th century Enlightenment. Her web site bio notes that she is “known for her inventive, thoughtful, and socially conscious productions” and in her program notes she states that she is “concerned about our world, threatened by natural disaster, climate change, and polarizing social and political camps.”

It’s not hard to see those concerns as a logical outcome of Enlightenment values such as reason, science, and the Big Three: liberty, equality and fraternity. Those values sparked revolutions in both Europe and the colonies which would eventually become the USA. At a time when one of those “polarizing social and political camps” is dedicated to the destruction of those values, their celebration in “The Magic Flute” could hardly be more relevant.

Opera Theatre of St. Louis's "The Magic Flute" runs through June 26th in rotating repertory with three other operas. To get the full festival experience, come early and have a picnic supper on the lawn or under the refreshment tent. You can bring your own food or purchase a gourmet supper in advance from the OTSL web site. Drinks are available on site as well, or you can bring your own.  For more information, visit the web site.