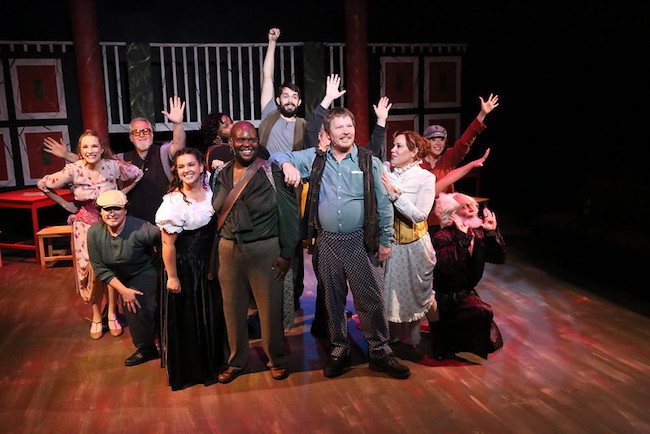 'Something Rotten' at New Line Theatre: A spirited, witty and whimsical delight

The playwright’s the thing in New Lines Theatre’s high-energy and highly entertaining production of “Something’s Rotten!” And Shakespeare is the playwright of the moment in the adroitly crafted musical that overflows with Shakespearean and cultural references too numerous to list. The show is always a good time and New Line’s captivating, fast-paced production doubles the pleasure.

Nick Bottom is so over William Shakespeare, even if he’s the producer and director who first encouraged the aspiring actor to try writing. His playwright brother Nigel, like most of London, is besotted with the Bard, propelling Shakespeare to a rock star status he quite revels in. Shylock, a Jewish man, loves the theater but is legally forbidden from investing, which is too bad because Nick could really use a new patron. Bea, Nick’s wife, supports her husband’s endeavors so much that she vows to get a job and help, even if that means dressing like a man to get hired. Portia, daughter to the pompous, sanctimonious Brother Jeremiah, loves reading, Shakespeare and the theater she’s forbidden to see. When she and Nigel “meet cute,” the sparks are instant and all the pieces fall in place for a comic romp with a happy ending.

Chris Kernan and Marshall Jennings are perfectly suited and complimentary as the sympathetic everyman types of Nick and Nigel Bottom. Both have solid, pleasant vocals and expressive, easy to read characterizations that are immediately likeable. Though compelling, they’re also less charismatic than Clayton Humburg’s insouciantly charming William Shakespeare, with a pitch perfect rock ‘n roll growl and persona to match. Carrie Wenos plays to her strengths as the innately feminist and sassy Bea and Melissa Phelps adds attitude and a sharp wit to the eye-batting ingénue Portia.

The leads here are engaging and strong and I wish I could say the same for the entirety of the supporting cast. While the majority are solid, their dialogue was either monotone or slightly overdone, and some reactions were focus-stealing in the chorus numbers. Additionally, there were a few problems with the costumes and make up that may be worth double-checking. The first is the length of the chorus members' under skirts creating a sense of a whole rather than a distraction that bordered on over-exposure. The second is the issue of the aging makeup application for Nostradamus. Though it may have looked balanced and well blended in the dressing room, it was overly dark and inconsistent under the stage lights. For the first several minutes, I questioned if the performer was wearing black face. While I am certain that is not at all intended, the application merits review.

Director Scott Miller hits the bull's eye with less over-the-top slapstick and more interconnected and relatable humor in this production. Not that there isn’t plenty of physical humor, particularly the posturing and reactions, it simply isn’t the focus as I’ve seen in larger-scale productions. The benefit is the myriad references to Shakespeare’s work, musicals and pop culture are more comically pronounced, though likely impossible to catalog in a single viewing. Music director Mallory Golden and choreographer Alyssa Wolf employ a light, almost freewheeling touch with their contributions. The singing and dancing are well balanced and executed with a deceptively simple feel that heightens the sense of being grounded in real, fallible yet easy to like and forgive characters.

New Line Theatre’s smartly interpreted “Something’s Rotten!,” continuing through October 15, puts the emphasis on the natural humor and empathy that lies in the relationships, old and new, at the center of the play. The approach works marvelously well in the intimate Marcelle theater. Even Shakespeare’s reputation for calling purloined stories his own seems rooted in his relationship with the Bottom brothers in the book by Karey Kirkpatrick and John O’Farrell, with music and lyrics by Karey and Wayne Kirkpatrick. Well-directed, well-rehearsed performers ensure the many humorously familiar lines and references flow naturally, with just an eyebrow or two raised in confirmation. The show is great fun for all ages with catchy songs, likeable characters and plenty of laughs from clever, relatable humor.