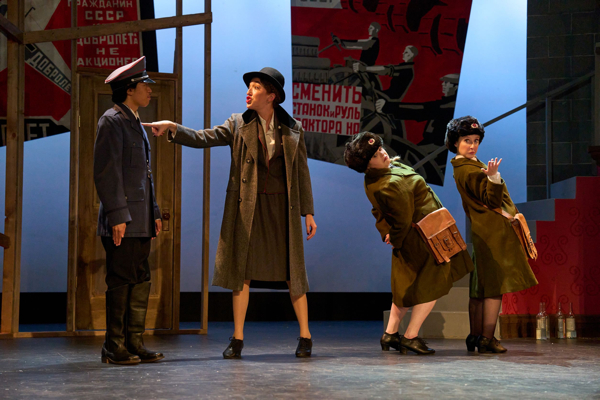 On October 6-9, Saint Louis University presented “The Government Inspector,” by Nicolai Gogol. This was the first smash hit by the man who is now revered as the father of modern Russian comedy. This play opened in 1836, when the playwright had just turned twenty-seven.

Let me mention that Gogol was Russian, yes—but Ukrainian-Russian. He grew up speaking both languages.

The SLU production is a premiere of a new adaptation by Benjamin Hopkins and Lucy Cashion—an ambitious and successful student/professor collaboration. The adaptation sets the story in Soviet Russia rather than Imperial Russia but with nary the loss of a laugh.

Gogol called his central character the “gorodnichy” (Police Chief, or really City Manager). In this CCCP-modernization the office is “First Secretary”—an excellent choice.

We’re in a country town. The action takes place in the First Secretary’s home—and in a hotel room. One set, by Joseph Stafford, nicely serves both purposes.

The First Secretary and a host of other local officials are shocked to hear that a Government Inspector will soon arrive (incognito). Gossip leads them to conclude that a mysterious woman staying at the hotel is the Inspector. (We soon learn that she is, in fact, no more than a junior clerk wandering the provinces with her servant, and living off money from her father and whatever she can cadge off the locals. She hasn’t paid her hotel bill in weeks.)

Chaos ensues. The “Inspector” is deluged with bribes from every single corrupt official. She lusts after the Secretary’s nephew, and ends up promising to marry him. The town rejoices—only to be shocked—really SHOCKED—when the truth is revealed and the real Inspector comes to town. Vladimir Nabokov wrote, of this play:

It begins with a blinding flash of lightning and ends in a thunderclap…it is wholly placed in the tense gap between the flash and the crash.

Lucy Cashion directed the show. She is reliably wonderfully imaginative. Gogol’s play is a satirical farce. (There are six doors on the set, so it has to be farce. [In Meyerhold’s production there were eleven.]) Ms. Cashion, as director of the production, leads her cast into a cartoonish melodramatic style of acting. Now, I’m a big fan of melodrama, and for an 1836 play that’s an appropriate style. Many speeches are delivered straight to the audience. It’s what I call the “highwayman style”: the director places her actors down-stage and commands them to “Stand and deliver!” For the most part it works.

Grace Wallis, as the First Secretary, anchors this show with a bravura performance. She’s tall, lean—even lanky—with strong, sharp, wonderfully expressive features. Those eyes! (“This woman,” I said to myself, “is destined to play Elpheba.”) And graceful! The whole show runs at machine-gun pace, but Ms. Wallis makes all those rapid-fire words her own and full of meaning. Such confidence! And such an unblushing embrace of that melodrama style. Brava!

Allie Thornton brings beauty and energy to the role of the “Inspector”, and captures the character’s idle, insatiable hunger for money—and food.

Some in this large cast (sixteen actors playing twenty-one roles) seem mainly concerned with getting all those words out as fast as possible. (The diction, overall, is exemplary.) But a few small roles are blessed with actors who can squeeze real meaning out of the words.

Dobchinsky and Bobchinsky, a sort of Tweedle-dum/Tweedle-dee pair of “landed proprietors”, get lots of the laughs. They are beautifully played by Laurel Button and Meredith Lyons. Ms. Button, especially, has a face capable of the most wonderful wall-to-wall blissful smiles—or deeply grievous frowns.

The evening is filled with directorial delights. The scarcities in this rationed world are symbolized in the sparsity of furniture: there is, on stage, only one chair. No other furniture! This chair becomes a running gag, as time and again people are asked to “take a seat”. (Who gets the chair?)

Now in large cast shows we often find one actor playing several roles. But here they occasionally play two roles at the same time! In a scene where townsfolk come to the “Inspector” to lodge complaints against the First Secretary, Kate Smith and Lauren Tubbe each play two petitioners—darting back and forth from one side of the stage to the other. Somehow, they give real personality and meaning to both of the characters they are thus time-slicing.

Strangely, little wisps of “The Nutcracker Suite” drift into several scenes, I’m not sure why. Sometimes it’s a bit distracting. But in the end, as the town rejoices over the imminent marriage, the entire cast sweeps into actual ballet, swirling ‘round the room to “The Waltz of the Flowers”.

There are a few problems with the show. First, the dialogue is generally delivered at “circus tempo”—really fast. Now, Gogol wrote all those words, and I guess you have to get them all in. And comedy should be brisk. But—though I love Gilbert and Sullivan patter songs I wouldn’t want to listen to “The Modern Major General” for two-and-a-half hours.

Secondly, there is some awkward cross-gender casting. In a university production there are many good reasons to give a woman a man’s role, but there are dramatic limits. In Gogol it is the Chief of Police, his wife and his daughter who are central to the plot. The (male) “Inspector” attempts to seduce first the daughter and then the wife. This adaptation presents a female First Secretary (perfectly reasonable in Soviet Russia), her sister, and her nephew. We have a female Inspector (also Sovietically reasonable) attempting to seduce first

the nephew—and then the Secretary’s sister. Oh, nowadays we’re not supposed to blink at such things, but dramatically it’s just untidy. Untidiness is as unwelcome in a good farce as it is in an Agatha Christie mystery.

And then there’s the gossip about the Judge (a woman) having an affair with Dobchinsky’s husband—so that all of Dobchinsky’s children look like the Judge. Hunh??

Costumes by Lou Bird are very fine and appropriately Soviet—fur caps, uniforms, and a dowdy skirt-suit for the First Secretary.

Joseph Stafford gives us a skeletal framework of a house, with sweetly appropriate distorted perspective. Everything looks “just a little off”.