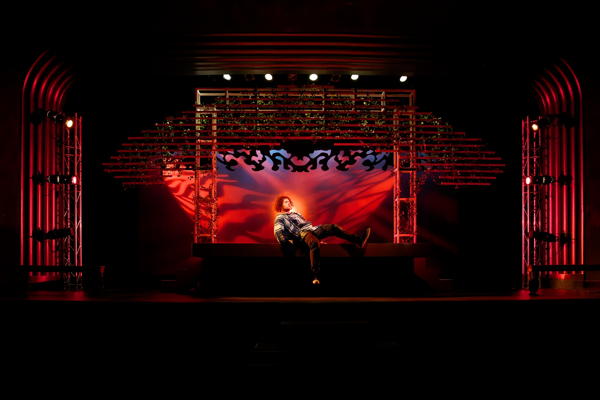 'Everybody' at St. Louis University: It's what theatre is for

As I was walking out of the theater after the show at St. Louis University last Thursday (November 17, 2022) I said to myself, “THAT is what theater is for!”

It was a very modern adaptation of one of the oldest plays in the English Language—the late medieval morality play Everyman. It’s an allegory, telling the story of how, when Death calls for us, we must present an accounting of our lives to God—and we’re never ready. (Can we cook the books somehow?)

The characters are abstract concepts, like Friendship, Kinship, Knowledge, Good Deeds, Time and such.

As it happens I had just finished reading another moral allegory—"Pilgrim’s Progress"—which had gathered dust on my shelf for decades. It was a tedious tromp with Christian through all sorts of tribulations and Calvinistic theology. It was indescribably boring!

But this new adaptation of "Everyman" is fresh and fast and fun and wise and brilliant! In keeping with the times, it’s called “Everybody”. It’s by Brandon Jacobs-Jenkins. And it’s the very best new play I’ve seen in years!

A very personable Usher (Colleen Dundon) greets us with the most charming curtain-speech I ever heard, then she steps gracefully into the role of God. God is unhappy with mankind and asks Death to call each and every one of us to come (in the person of “Everybody”) before Her and make an accounting of his life.

Death (Sophie Smith), is bright and pleasant. She summons five people from the audience. These are “Somebody”s—called to play the roles of “Everybody” and all his friends and attributes. Between small scenes they sit in silhouette and talk or argue among themselves. Sometimes from off-stage they voice “Everybody”’s thoughts to himself.

When Death approaches “Everybody” he is terrified and tries to bribe her, but Death is adamant. She will, however, allow “Everybody” to bring along one friend—one ally to help support his case. He appeals to Friendship, then Kinship and Cousin—all of whom weasel out of that one-way trip. Even his beloved Stuff (née Goods) refuses. (Well, “you can’t take it with you.”)

Only Love (née Good Deeds) agrees to come. “Everybody” suffers humiliations. Then, after a bizarre dance of skeletons, even parts of himself betray him; he loses Strength, Beauty, Senses, Mind. At last he goes alone—so very alone—through that portal of the grave to face God.

“You are dying, Everybody. Starting now.” (Snap fingers.) That’s basically the moral. You die alone. It’s final. You can’t go back and fix any mistakes.

I was amazed at how closely the author follows the old script from 1510. The structure is unchanged; almost every scene is very like the original. Even the small comic bit where Kinship begs off from the pilgrimage because he hurt his toe—is straight from the old Everyman.

The characters are the same, though with some variations of name: Fellowship becomes “Friendship”, Goods becomes “Stuff”, Good Deeds becomes “Love” (i.e. agape, rather than romantic love).

Some of the specifically Roman Catholic references to Confession and the Sacraments are lost (as is only fitting in this relatively Godless modern world).

Still the play’s appeal to conscience and moral duty is as powerful as ever. The play is filled with utterly modern truth and relevance. You’ll go away feeling refreshed and inspired (as well as greatly entertained).

Jim Burwinkel designed the set, Lou Bird the costumes, Maddy Chatham the sound, and Dense Chavez the lighting. All are graceful and highly professional.

Many thanks to all concerned!

P.s. There was no curtain call. How perfect! Curtain calls merely say, “This was all pretense; don’t take it seriously. Now give us a stroke or two.”

"Everybody" was presented November 17th through 20th. For information on upcoming shows by St. Louis University Theatre, visit their web site