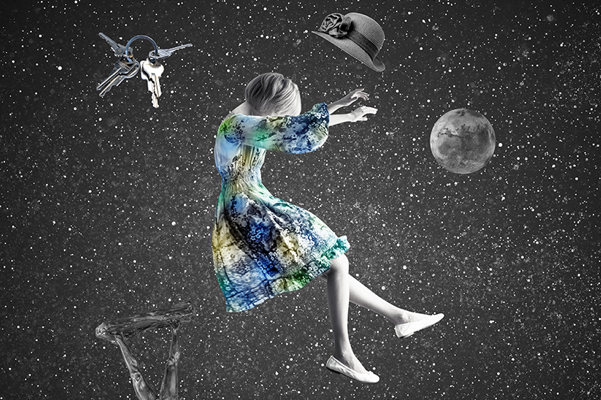 'The Dust' at Washington University is hypnotic; but is it theater?

In the Hotchner Studio Theatre designer Patrick Huber presented a strikingly handsome, set: a large square floor framed by polished wood, starkly simple bits of furniture.  Overhead a couple of enigmatic square apertures of—is it concrete?    Behind was a great projection screen.  On this, and on the playing floor itself, an avalanche of images were projected—exploding universes, skyscapes, gorgeous statuary, the surface of Mars, beautiful geometric patterns, apocalyptic destruction—as well as ordinary family pictures, apartment interiors.

1.    A mother seeking to reunite with a long-ago-lost son, who is understandably distant.

2.    A couple where the wife suffers a potentially fatal disease;  is it wise for her to take a test and thus know the details of her mortality?

3.    A singer who has become famous for impersonating an older singer.  Newer singers are now impersonating this impersonator!  Who is she?  Where is her self?

4.    A new Adam and Eve on Mars after everything on Earth exploded.  “I’m Adam.  You’re Eve.  We are Chinese.”  In a magical moment her belly inflates.  Is she somehow a surrogate mother?  Can they have a future together?

5.    An educator and a roller-skating car-hop fall in love while visiting the Rodin Museum in Paris.  They share insights into the sculptures.

6.    A young artist and an old (homeless?) man in a studio-apartment.  She draws him—and draws his story from him.  Did he, twenty-five years ago, go out to buy a loaf of bread, then enter some limbo only to awaken now, with the world changed?

From time to time small things just disappear upward:  a medical diagnosis, a lady’s hat, a set of no-longer-useful keys.  They’re mysteriously drawn by a string up into those concrete apertures overhead.  What does this mean?

It takes a great stretch of the imagination to see that these stories are at all related.  I think, rather, that they are slight sketches that the playwright wrote over perhaps some years and only now decided to put into one evening on the stage.  Some are mere fantasies on a dramatic moment—or on a non-dramatic visit to a museum, where we hear a collection of observations that might have sprung from the mouths of two perceptive and eloquent docents.

Throughout there is that tsunami of projected images.  They’re gorgeous, they’re hypnotic—but are they theater?

In the lore of ancient Greece there were two species of demigod who competed for our attention:  the Muses, who invited us to create in the various arts;  and the Sirens, who promised instant gratification, but actually lured us to our destruction.  Hera sponsored a contest between them, and the Muses won.  But it seems that was only the semi-finals.  That competition is still going on, as attested by the lavishly high-tech productions so popular on Broadway and by the major modern Rock Concert.

So, does theater need only “two boards and a passion”?  Or does it now require many thousands of dollars worth of electronic equipment?  Does it invite us to think, to imagine?  Or does it say “Just lie down and let me pour a sensory overload on you”?

All of these special effects were wonderfully done in this production.  But if the playwright called for them in the script then she should be cautioned:  such a play can only be staged by a very rich producer (such as Wash U).  And, to a degree, those effects distracted from any true dramatic elements in the play.

Director William Whitaker gave us a highly polished production of this strange, slight play.  But, for me, the evening was only lightly touched by the Muses—and very heavily influenced by the Sirens.