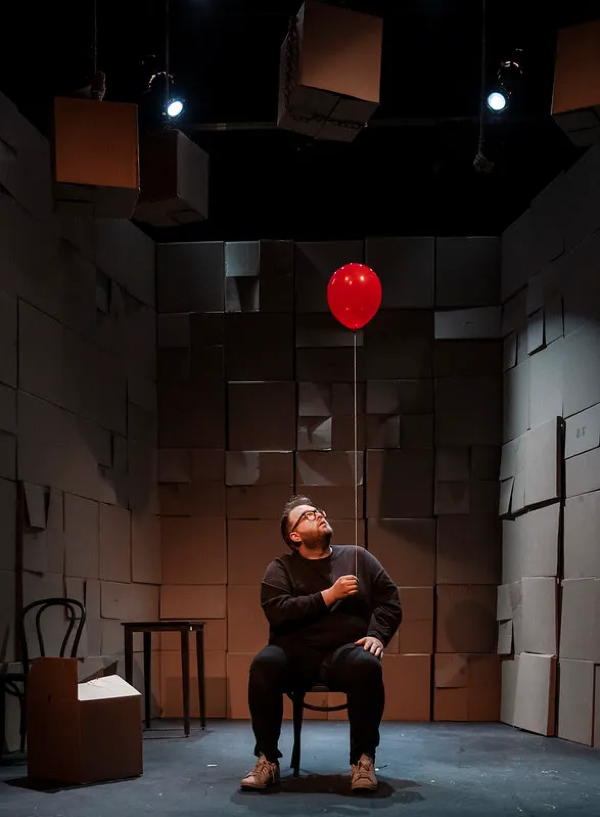 'Forget Me Not' mixes magic and domestic drama at the St. Louis Actors' Studio

Who would want to live a life of deception? Well (politicians and adulterers aside) we might say “a Magician!” The St. Louis Actors’ Studio is presenting at its Gaslight Theater just such a magician. It’s Kyle Marlett, and the evening is called "Forget Me Not."

It’s an odd mix of skillful magic tricks decked out with deep personal tales of domestic trauma and a bit of philosophy-lite.

We walk in to see the tiny Gaslight stage quite encased in large gray boxes—floor to ceiling, stem to stern—oh, there must be a hundred and twenty or so. Two bent-wood chairs and a small table are center stage, and on the table one glowingly-vivid-red box suspended by a chain to somewhere far above in the “flies”. It takes me a moment to realize that these boxes are all just ordinary cardboard boxes, their color due only to lighting. They make a strongly dramatic surface, with flaps slightly loose here and there to catch light and make shadows. Veteran Patrick Huber designed the set and lights, in consultation with Mr. Marlett, and they are a powerfully dramatic use of this small space.

That red box center stage! It’s hypnotic. As showtime approaches I sense a tiny flexing of that chain supporting the box. Is it moving? Or is it perhaps just the subtlest pulsing of the light? Yes, yes, the light pulses! Oh, folks in the audience, stop the chatting! Put away your smart-phones. The show is starting! (They don’t.) A great heart-beat sounds, the red box rises high, and the lights go down.

Kyle Marlett is a rather portly young man in casual black. And he’s a gifted magician. Throughout the evening, as he draws various items from the boxes, we see a number of illusions—some involving deft legerdemain, some with a bit of recondite technological support. There was nothing that I’d ever seen before; nothing that was not impressive.

Marlett accompanies his magic with personal stories—his first childhood encounter with magic, his disillusion when the trick was explained, his childhood in poverty, his troubled relationships with his abusive alcoholic father and his drug-addicted older brother, his suffering from Krone’s disease, his search for self, his need to be remembered. And always with little touches of “wisdom” about learning from these life trials. And always with reference to the magician’s life of deception.

All of this is supported by a quite beautiful musical score—piano, cello, violin—all gorgeously played and engaging. Mr. Marlett designed this sound.

From time to time members of the audience are invited on-stage to assist in the magic. In the small theater this is very “up-close” magic. And yet a trick or two were less convincing than they might have been: e.g. a young woman from the audience was given an invisible rose; only when she truly believed could she actually smell it. (But we couldn’t smell it.)

Once a gentleman invited to the stage was allowed to be too garrulous, and this slowed the pace of the evening. At times Marlett’s personal stories verged on the maudlin. Once he actually said, “I was robbed of my innocence.” More than once he choked back tears. Now an actor able to cry in, say, a Chekhov play is a good actor, and he’s eliciting pity for the character. Mr. Marlett, however, seems to be eliciting pity only for himself—a much less attractive and less stage-worthy effort. Moreover we know that while thus overcome with emotion he is carefully, secretly, preparing his next illusion. And we know that he will repeat this weeping every night of the run!

So "Forget Me Not" is not entirely successful, but it’s nevertheless an interesting theatrical experiment, and it’s laced with a lot of astounding magic.

It plays at the Gaslight through December 18. More information is available at the St. Louis Actors' Studio web site.