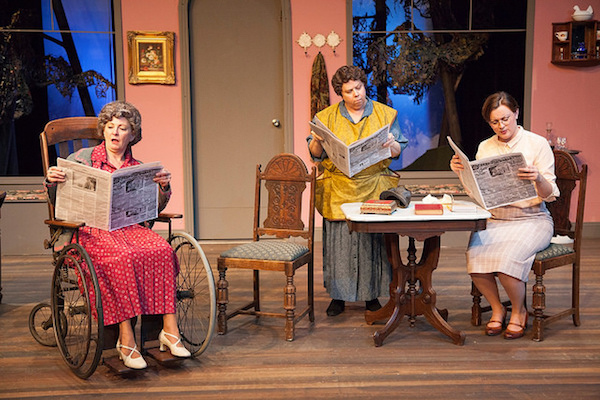 Emlyn Williams' Night Must Fall is an interesting play, though the plot is a bit thin, and it gets a thoroughly satisfying turn in the Clayton Community Theatre's current production. Set in 1935, we are introduced to the household of Mrs. Bramson, a dowager with a niece and staff devoted to her care and attention. They live a rather routine and staid life, though things are turned upside down as their quiet home is overtaken by the investigation of a murder.

Mrs. Bramson is a feisty old girl, but not without heart, quickly forgiving her maid Dora for breaking several pieces of China after she learns the girl is pregnant. Mrs. Bramson demands to meet Dan, Dora's paramour, presumably so she can persuade him to marry the girl. Instead she finds herself quickly taken in by his charms. Niece Olivia is immediately wary but also intrigued, much to the dismay of her suitor Hubert.

The entire household is upset by the arrival of the police and discovery of a murdered woman's body near the house. The remainder of the play bounces back and forth between Mrs. Bramson's infatuation with Dan, Olivia's dogged suspicions, and the local inspector's attempts to solve the murder. The plot is nicely layered but still quite easy to figure out and not too scary, ensuring the show is audience friendly.

Liz Hopefl delights as Mrs. Bramson, showing a range of whiny, petulant behaviors, yet somehow remaining humorous and likeable. Hopefl finds multiple levels and variation of character, ensuring Mrs. Bramson is sympathetic rather than grating. She's countered by Mark A. Neels, as Dan, and Mica Tharp as niece Olivia Grayne. Both Neels and Tharp turn in solid performances but would benefit by adding more dimension and emotional connection to their roles. They do a nice job capturing the essentials, incorporating more nuance and emotional levels will help them grow.

Neels' Dan pulls of the charming part of the con quite well, but his alter ego lacks personality and is not entirely convincing, contrasted, nor distinct. His transitions into and out of his killer persona, the odd movements and affectations, muddy his character and come without a defined trigger.

Similarly, Tharp's Olivia is smart and skeptical, so much so that her sympathies towards Dan, particularly when she covers for him, appear confused and uncertain. The two actors need to mine their chemistry and pay more attention to timing. An attraction between the characters is present; Tharp simply needs more clarity and purpose to help convey Olivia's motivation for her actions.

Mary Klein, Beth Kuppinger, Brad Kinzel, Crystal Franke, and Karl Bockemeier capably fill the remaining roles, although there are times when their characters are less focused and present in the scene.  There were also a number of seemingly comic moments that don't come across as well as they can, though it's clear director Nada Vaughn intended such.

Performing with an accent is another struggle for many actors. Though the actors in Night Must Fall all start out with relatively strong accents, the majority of the cast slips in and out of voice, and several characters lose their accents completely during the second act. Attention to detail and consistency is key to elevating performance quality. Director Vaughn and the company generally succeed with their roles, however, ensuring the show is entertaining and fun.

In St. Louis, one needn't look far to see why community theater is such a vital part of our performing arts history and tradition. These organizations not only provide a creative outlet for a number of non-professionals to contribute their creativity, they also offer up-and-coming actors, directors, and designers an opportunity to add to their skills and experience. With Clayton Community Theater, you get a great mix of talent and a strong, enthusiastic group of volunteers committed to producing enjoyable shows.

Entertaining, though a bit light on the suspense, Night Must Fall runs through October 30, 2016 at the Clayton Community Theatre, which makes its home at the Washington University Annex on Clayton Road.