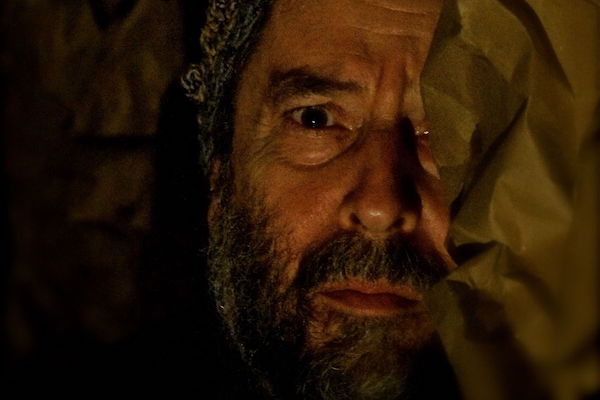 Effectively ominous, 'Burrow' stokes our fear of things that scratch and thump in the dark

Young Liars Theatre presents an intriguing interpretation of Franz Kafka's unfinished Der Bau, adapted by Jeff Skoblow, that's a little creepy and a touch fatalistic, but nonetheless completely captivating. The unfinished story tells of a man who has painstakingly built his own underground bunker. A sprawling set of rooms connected by long passages, he stores provisions and his belongings in some, but many are empty spaces with no specific purpose or need.

The man, portrayed with manic sensitivity by Skoblow, never shares his name, yet he speaks conversationally to the room. Initially, he delights in describing how carefully he planned and carved his home from the stone. He describes the entrance, laughing at how cleverly it is hidden in plain site. He describes, with detail and pride, the personal sacrifices he made to create his burrow, and it's here we start to understand his psyche. He goes to great length detailing how he trained field mice, small fry as he calls them, to dig multiple tunnels for ventilation, then gleefully reveals that he controls the population by trapping and eating many of them.

Slowly, the man shifts from rational and proud to paranoid, hyper-vigilant, and suspicious. He worries about his enemies above ground, plots how he will guard and protect his home, becoming increasingly hesitant to leave. Outside his burrow, he never wanders far, lest someone encroach on his home. When he returns, he is apologetic, fearing he has neglected his hovel to the point of offense.

Once clear-headed and direct, his speech now wanders, jumping from worry to anger to conspiratorial with an eager nod of agreement to the darkness. The effect is chilling and convincingly authentic, particularly in the close space of his bunker. Suddenly, the room seems smaller, the indeterminate noises he references grow louder, and his fear and anxiety is so real you might catch a bit of nerves just listening. At one point, Skoblow circles the room slowly, looking into the eyes in the unseen darkness, a chilling moment made more effective by the careful, slow movements of the actor.

There's a philosophy and curious bent that drives some men to question themselves past reason and sanity. Skoblow understands this spot well, and he dances back and forth over the edge, a portrait of well-reasoned and thoughtful insanity. He and director Chuck Harper find the moments in Kafka's story and extend them to create a show that is insidiously frightening. Just as the man does not know the source of the noise, it is often what we don't know that frightens us the most.

The burrow itself seems a character in the play, and the company has done an excellent job personifying the space. The scenic environment, designed by Kristin Cassidy, is detailed and enveloping, the walls looks realistically like natural stone, and there's just the right amount of dust, dripping water, and detritus to complement the story. The lighting, by James Wulfsong, is particularly well plotted and executed, drawing attention and, along with Adam Frick's deft sound design, increasing the tension as Skoblow's character intensifies. The creative team respects the story and its unfinished nature, yet still provides a complete and satisfactory arc that is significantly improved by the environment.

Young Liars unsettling and entertaining Burrow, in performance through November 5, 2016, is a perfect choice for theatergoers who enjoy suspense and a light fright every now again. Well-performed and intimate, the house is smaller than normal so you'll want to make your reservations early.