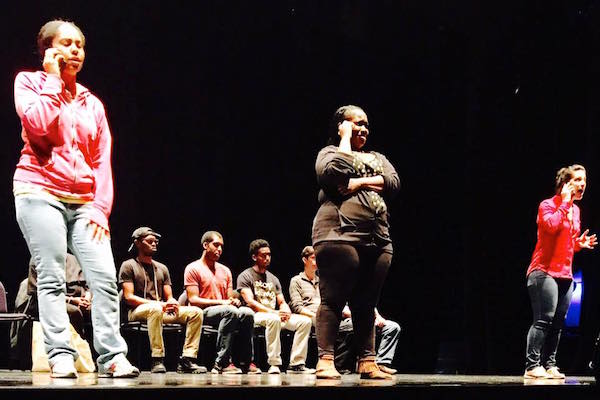 The Repertory Theatre of St. Louis was host for an encore performance of the Every 28 Hours Plays project, a collection of 64 approximately one-minute plays that confront the multitude of questions surrounding the frequent and violent deaths of young black men in our communities. Throughout the 90-minute show, we hear from mothers, friends, families, and black men of all ages; we also hear critical perspectives, skepticism, and statistics. So many grim statistics.

The curation of two dance pieces and 64 plays submitted by playwrights from across the country (including several from the St. Louis area) is well-informed, articulating multiple perspectives and thematically connecting the nine participating groups' pieces. Each representative company or group conveys a distinct focus for the their selection of plays. In addition to casting, the directors show clear intention with the interpretation and pacing of plays, and though the experience of each group is apparent, the performances are generally well motivated and delivered.

The multi-part show took place on the same stage as the Rep's current original production, Until the Flood. Dael Orlandersmith's evocative and lingering one-woman show presents eight sharply written monologues and a spoken word piece reflecting varying perspectives on the death of Mike Brown, one of the many young black men named in the project. Adding impact to the shared location, the Every 28 Hours Plays stage was encircled by the stunning memorial created for Orlandersmith's show.

A collaborative effort, the Every 28 Hours Plays project was initiated in St. Louis and curated by The One-Minute Play Festival and Oregon Shakespeare Festival. The current version, locally produced by Adam Flores, Joan Lipkin, Carl Overly, Jr., and Jacqueline Thompson, is, frankly, overwhelming to the senses. There are so many perspectives, and painful points so succinctly phrased that you want to reflect on the moment. But you can't, because you're quickly into another equally effective scene. Not so much so that you can't follow along, but with a cumulative impact of prodding the audience to answer the overarching question: are we going to actually/finally do something about this?

One of the most effective plays is the finale, "Unknown Thousands," by Nikkole Salter. The piece is one of many that remind us of the long history of racial tension and injustice in America. The tone and message is not accusatory so much as a call for empathy and common purpose. By the last line, Overly stands tall and resolute. A solitary silhouette speaking name after familiar name as the ensemble, undulating in rhythmic, murmured recitation, comes to stillness and silence. Though somber, it is hopeful, reminding us that as long as one voice is speaking, if they can get just one person to listen, change is possible.

The Every 28 Hours Plays project is neither comforting nor easy to watch, but it is an important contribution to a larger conversation, enhanced by the multiple forms of feedback encouraged by the creators and producers. The project will likely garner negative reactions from some, almost every production that successfully presents a point-of-view on a controversial subject does. Nonetheless, the show, which artfully explores contemporary challenges through articulate probing and response, is well written and performed. Audiences interested in contemporary, socially relevant theater will appreciate the well-constructed collaboration and some may be moved to continue the conversation.