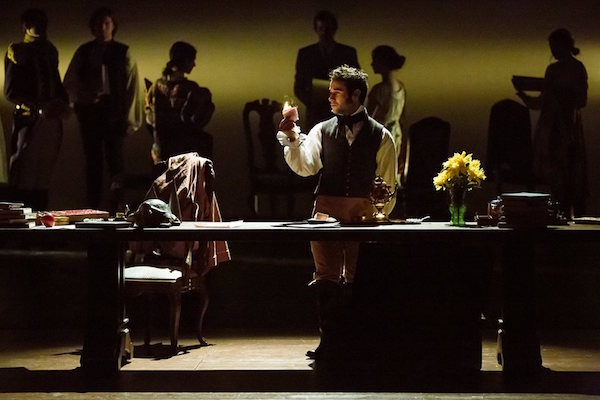 In Pursuit of Truth and Beauty: Tom Stoppard's 'Arcadia' at SLU

Tom Stoppard's Arcadia is a fascinating and deeply intelligent play. St. Louis University and director Lucy Cashion are giving it an elegant, beautiful production (playing through November 20). Conceive, if you can, a historical whodunnit where sex is blended with mathematics, the struggle between the rational and the Romantic eras is reenacted, and where Lord Byron, landscape architecture, and the second law of thermodynamics are central themes.

Arcadia is not for lazy audiences. The wit is sometimes subtle and quick, the language at times demanding. If you've no idea what the Age of Enlightenment or the Romantic Movement was, if you've never heard of Byron, if you've no concept of scientific inquiry -- then perhaps you should stay at home. But if you like to think, then careful attention to Arcadia will be bountifully repaid. In some ways it's like Shakespeare: it's worth reading before you see it; it's worth seeing several times. It is so rich that you'll keep getting more and more. But stay alert; eat lightly before you come -- and prepare to listen fast. This is my favorite modern play.

The play is set in an English country estate and shifts fluidly between 1809 and the present. Lucy Cashion has startled us in recent years with some wonderfully inventive avant-garde productions; here she shows an equally skillful hand in a rather more conventional mode. The set by designer Dan Giedeman is simplicity itself: one long, long beautiful oak table, a few chairs, an antique music stand. Far at the back against a softly-lit cyclorama sit the entire cast of twelve, frozen in natural poses -- as if in an aquatint. A piano, off-stage in most productions, here sits in an upstage corner.  The characters step into the scenes as they flow, afterward retiring to their chairs at the rear. The entire production is suffused with a spare, graceful beauty. Lou Bird does lovely work with costumes -- especially for the nineteenth-century characters.

In 1809 we meet Thomasina Coverly (daughter of the estate, thirteen) and her tutor young Septimus Hodge. Marilyn Arnold is quite perfect as the ingenuous Thomasina, the lovely adolescent mathematical prodigy who discovers fractal mathematics -- the geometry of nature -- a hundred and sixty years before Benoit Mandelbrot. Miss Arnold is filled with light grace. She conveys a convincing keen innocent curiosity about everything from why we can't un-stir the jam in our rice pudding to "What is carnal embrace?"

And now the modern-day characters:

Good acting abounds. There was, I think, only one significant lack: I missed a sense of tenderness from Septimus toward Thomasina. He is brusque, even intellectually combative with others in the play, but this will not do with Thomasina. There is a magic in this girl of which Septimus is fully aware. His proper formality as her tutor must not quite successfully mask his occasional flush of awe as she leads his mind into remarkable territories. And a tenderness is needed to support the final scene where, on the eve of her seventeenth birthday, Thomasina yearns for more than a tutor's sort of love.

There are, count them, five studies under way in this play. They are in:

What's the fifth study? Well, it overarches the others and is undertaken by just about everybody. It's the study of just what the heck is "carnal knowledge" and how does it effect the pursuit of truth.

Arcadia, under Lucy Cashion's gifted direction, yields a most satisfying evening. It examines the various paths to truth -- the artistic, the scientific, the intuitive. And it celebrates that wonderful trait which distinguishes genus homo sapiens from all others -- not just our hunger for knowledge, but that primal joy in the pursuit of knowledge, that dance of the intellect. We live in a world subject to the second law of thermodynamics: i. e., despite local eddies of order, in the long run disorder increases. We will ultimately arrive at the "heat death" of the universe, when everything is cosmologically "luke warm" and time ceases. What are we to do? "When we have found all the mysteries and lost all the meaning," says Septimus, "we will be alone on an empty shore." "Then," says Thomasina, "we will dance."