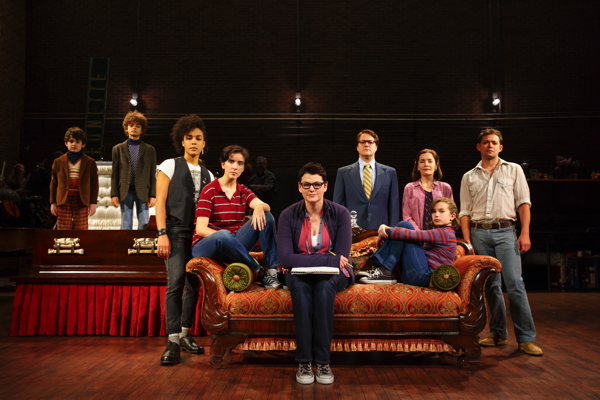 ‘Fun Home’ may be too small for the Fox, but it's got a big heart

Fun Home, the musical stage adaptation of Alison Bechdel's 2006 "family tragicomic" of the same name, is something of an odd fit for the Fox Theatre, where a national tour of the show is playing through November 27.

It is, to begin with, a small-cast show originally designed for a much smaller theatre. Even with a false proscenium that reduces the width of the stage by around a third, Fun Home feels dwarfed by the Fox's immensity. That creates a distancing effect that somewhat blunts the emotional force of the show, especially in the tragic and ultimately cathartic final scenes.

The story is also somewhat out of the Fox's usual Broadway hit mainstream. Like Ms. Bechdel's original graphic novel, Fun Home leaps forward and backward in time to tell the story of how she and her two siblings helped out at the small town funeral home (the "fun home" of the title) run by her father, Bruce, who was also the local high school English teacher.

In both the novel and the musical, Bruce emerges as a deeply conflicted and tragic character. He loves Alison but finds it hard to say so. He has male lovers outside of his marriage, but never fully comes to grips with his identity as a gay man. As a song heard early in the show, "He Wants," tells us, the Bechdel "fun home" revolves around what Bruce wants, and yet even he is not always clear what those wants are.

This is not, in short, your usual musical extravaganza. It's closer to a tragic opera, but with redemption for narrator Alison at the end.

Ms. Kron's book handles the original material's leaps backward and forwards in time by presenting us with three versions of Alison Bechdel: Alison, age 43, writing her book; Medium Alison, a bookish age 19 discovering her lesbian sexual identity at Oberlin College; and Small Alison, age nine or thereabouts, trying (and often failing) to get her father's attention and affection while chafing at his insistence that she confirm to a "girly" role that, even at her age, she recognizes as alien. It's an ingenious device that allows us to see adult Alison remembering her life and sometimes even taking part in it, as in the song "Telephone Wires," in which she recalls that final, unsuccessful attempt to form a real emotional connection with her father before his untimely death when he was struck by a truck on a busy highway -- an incident that might or might not have been suicide.

For her part Ms. Tesori has put together a score which, while not generating any memorable melodies, nevertheless succeeds at the more important task of revealing and illustrating character. As New York Magazine theatre critic Jesse Green points out in the notes for the Fun Home cast album, Ms. Tesori "abjures traditional song forms, opting instead for yearning fragments and bits of refrains that clump like cells into musicalized scenes: a smart parallel to the way Bechdel builds pages from individual panels." My first inclination was to dismiss the results as so much contemporary musical-theatre yard goods, but hearing the score again on the cast recording brought me around to Mr. Green's point of view.

An excellent ensemble cast brings this all to life, led by Robert Petkoff as Bruce. His character is complex and could easily come across as unpleasant, but Mr. Petkoff does not neglect the character's softer side, giving him real depth. Kate Shindle displays the same depth as the adult Alison, making the character's difficult emotional journey all too real.

Susan Moniz is heartbreakingly real as Bruce's long-suffering wife Helen, bearing up under the unbearable burden of her husband's conflicted soul and finally pouring out her disappointment in the song "Days and Days":

Abby Corrigan gets the enthusiastic vulnerability of Middle Alison just right and Alessandra Baldacchino is utterly engaging as Small Alison. There's fine work here as well by Lennon Nate Hammond and Pierson Salvador as Young Alison's brothers John and Christian, Karen Eilbacher as Joan (a.k.a. "Jo"), who is responsible for Middle Alison's sexual awakening, and Robert Hager in multiple roles.

The fact that Fun Home uses a small band playing on a raised platform in back of the stage instead of an orchestra pit helps make the sound clearer than it sometimes is at the Fox, as does the fact that there are almost no ensemble numbers at all. Individual voices invariably come through more cleanly over the amplification system. Sam Gold's direction pulls everything together flawlessly.

Fun Home may not be a great musical, but it is certainly an important one, especially in light of the dark strains of resentment let loose in the recent Presidential campaign. It reminds us that families can be difficult and that love is not always easy regardless of anyone's sexuality. Being human can just be hard sometimes, and we all need (as the old song goes) to "try a little tenderness."

Fun Home plays at the Fox in Grand Center through November 27. Note that the show runs around one hour and forty-five minutes with no intermission, and that evening shows begin at 7:30 p.m. instead of the usual 8.