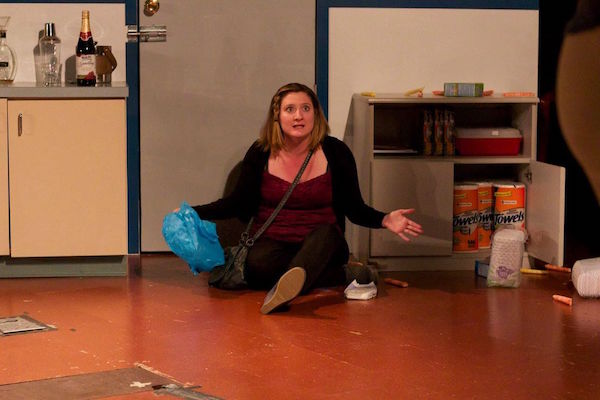 A Mismatched couple and an impassioned exhibitor create a big, comic 'Boom'

R-S Theatrics captivating production of Peter Sinn Nachtrieb's Boom peeks into a post-apocalyptic museum where a story of unexpected doom leads to a new creation myth. The humorous pairing of humanity's potential next Adam and Eve is countered by the more clinical, yet nonetheless passionate, observations of our docent, Barbara. The story is part creation myth, part scientific embellishment, and all for laughs in the company's smartly executed retelling.

In this show, the audience members are visitors to the museum. Barbara, sympathetically played with a crisp point by Nancy Nigh, guides us through the exhibit, pausing the action to provide her notes regarding the presentation. She clearly loves her work and wants to share her interpretation of the events with reverential devotion. Whether Barbara is puppet master or god, it quickly becomes clear that she has more control over the tale that is about to unfold than perhaps she should. We soon learn others have made the same observation.

After her introduction, we meet the exhibit's subjects. Jules, an intellectually exuberant, socially awkward Andrew Kuhlman, and Jo, a sharp-witted and extremely skeptical Elizabeth Van Pelt, as well as the fish: Dorothy, Jon Jon, and their two companions. Sex and the fish figure prominently in Jules' work, leading him to seek a companion in his underground apartment in the event his conclusions, scoffed at by his peers, prove correct.

Jo answered an ad for "world changing sex" placed by Jules in the student newspaper in hopes of completing a journalism assignment. She's quite forward about getting to the sex, which immediately intimidates Jules. She's also sarcastic and a little weirded out by Jules' theory. Unfortunately, things aren't looking good for them. Jo is on a deadline, Jules is gay, and they are both nervous virgins. Could a global catastrophe improve their luck?

The cat-and-mouse nature of Jules and Jo's relationship is deliciously satisfying, as are Barbara's increasingly frequent and personal interjections. The three actors pace around with increasing determination as the tension builds, and there's a continuously on-edge tone that becomes more comically persistent. The story is revealing and funny, though there are underlying currents of fear, loneliness, and the pain of never quite fitting in that resonate with affection.

The expanse of the theater space at the Chapel is quite effectively transformed into a large exhibit hall. There's a table with a brightly colored aquarium in the center of the floor, while the elevated stage looks resembles a small apartment. Attention to detail also reveals a control podium and a large drum to the rear of the stage. Every detail serves a purpose, and most are equipped with hidden, humorous surprises.

This configuration reinforces Barbara and the audience as observers, setting up an invisible wall for a show that may at times feel uncomfortably close. Scenic designer Keller Ryan, lighting designer Nathan Schroeder, and sound designer and fight choreographer Mark Kelly have teamed with director Sarah Lynne Holt and technical advisor Scott Schoonover to create a show that successfully merges museum and mythology with comedy.

The closing production of R-S Theatrics season artfully demonstrates a commitment to intellectually stimulating, visually engaging, and thoroughly enjoyable theater. The quirky characters and odd intermingling of stories is strikingly personal and prickly, but touching. While the tale feels familiar if a bit odd, Holt brings clear-headed direction, with a focus on timing and delivery that adds context, sass, and sensibility to the show's inventive twists and obstacles. She and the actors find every sympathetic and comic moment in the script and turn it to their advantage.

"How did I get here?" "What if my contribution isn't deemed worthy by others?" Whether you approach the answer through faith, art, analysis, or a myriad of other paths, these conundrums remain a lasting source of query and inspiration. Boom, R-S Theatrics, running through December 4, 2016 is a welcome and enjoyable dive into that question, with an imaginative script, smart direction, and captivating performances.