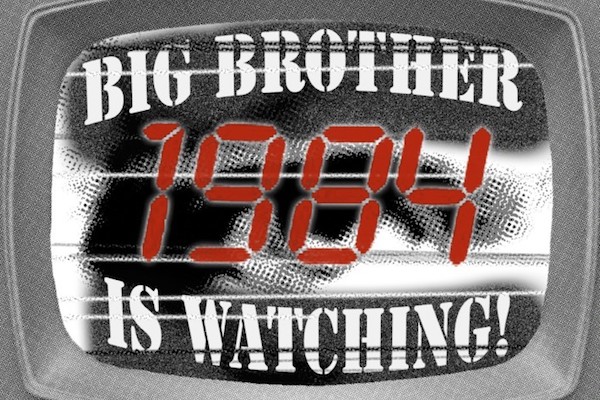 The University of Missouri at St. Louis presents George Orwell's 1984 in a stunningly fine stage adaptation by Michael Gene Sullivan.

Orwell's novel was written in 1948. I read it as a freshman some sixty years ago. Since then not a year has gone by without events in the world reconfirming and deepening my conviction that this is the most important, the most profoundly prescient book on modern politics and power ever written.

The story is set in a totalitarian dystopia of 24/7 surveillance where BIG BROTHER IS (quite literally) WATCHING YOU! Eternal war is maintained among the three global super-powers. Expressing, or even thinking, a politically-incorrect idea is a crime. Newspeak, a reduced and crippled form of English, helps to make "thought-crime" impossible. History is constantly revised according to the regime's current whim. The regime frustrates and destroys all trust--all love--except for the love of Big Brother. The population is to be kept in ignorance, fear, insecurity and hunger. Arbitrary furious hatred is manufactured. Truth itself is abolished. The Ministry of Peace maintains the eternal war; the Ministry of Truth serves propaganda and revises history; the Ministry of Plenty oversees rationing and starvation; the Ministry of Love is concerned with brainwashing and torture.

If any of this reminds you of

then it's time for you to revisit 1984 to see what else is in store. I strongly recommend this fine production.

The entire play takes place in the Ministry of Love where our hero Winston is being interrogated. For almost the entire play Winston is strapped to a high-tech gurney and forced to tell the story of his "reactionary" thoughts and deeds. From time to time--almost randomly--he is subjected to frightening electro-shock torture. This is all in an effort to "cure" him of his hatred of the regime and to make him truly love Big Brother.

Tony L. Marr, Jr., does beautiful work in the very demanding role of Winston. His convulsive reaction to the shock torture is horrifyingly realistic.

Six guards act out other roles in Winston's story. Costumer Jennifer (JC) Krajicek gives them all Stalinesque uniforms--vaguely military, tending toward dowdy for the two women. "Sensible" shoes, of course.

Jordan Cooper gives a very strong performance as Julia, the girl with whom Winston has an illicit affair. In her job she's an absolute party faithful, but alone with Winston in their secret hide-away she is a romantic rebel.

Harry Menner, Andrew Hartley, Andrew Woodard, Sage Hayes and Kyle Mertens all do fine work as the guards. John Singer makes us really hate him as O'Brien, the Thought Police agent who lures Winston and Julia into this horrid fate. (Andrew Woodard plays O'Brien in an earlier scene--a nicely unsettling choice. Who indeed is O'Brien?)

Director Matthew Kerns has done beautiful work in his staging of this difficult but very important piece.

1984 continues at the Kranzberg through December 11.