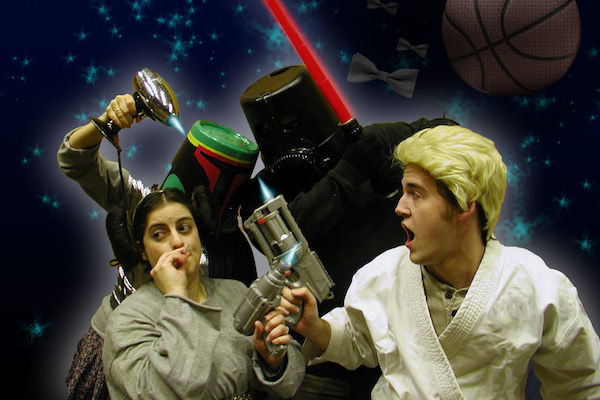 A Madcap 'The Making of The Star Wars Holiday Special!' makes merry with the season

Magic Smoking Monkey Theatre leaps into the holiday season at light speed with their uproarious parody The Making of the Star Wars Holiday Special! The company takes on the famously bad show with exaggerated comedy, plenty of 1970s television references, and spectacularly clumsy impressions played for comic effect.

By 1978, the Star Wars franchise had already earned blockbuster status and all-time favorite mentions. What better way to extend the popular franchise than to create an action filled holiday adventure story with a message about love, family, and acceptance? Comedy writer Bruce Vilanch was hired and he created quite a story. The tale sees the surprisingly loveable and popular Chewbacca trying to make it home to celebrate "Life Day," a Wookie celebration reminiscent of Christmas, with subtle references to other religions and tolerance thrown in. Han Solo is taking him home, and naturally the two encounter alien challenges and battles between the rebel forces and storm troopers. Just as naturally, Luke Skywalker, Leia, CP30, and R2D2 come to the aid of their friends. Frenemy Lando Calrissian may or may not make an appearance.

The show is schmaltzy, clichéd, and confusing in plot. There's also the added challenge of a lead character who can't communicate much without benefit of translation, due to his limited vocabulary, in a human sense, and hirsute exterior. The special was, frankly, a disaster. More focused on star cameos than story, it only aired once and, as young fans of the franchise, my brothers and I eagerly tuned in. I can assure you it was bad. Perfect source material for a Magic Smoking Monkey show!

As our host, John Fisher is spot on and nearly flawless in his impression of the eccentric writer Bruce Vilanch, with great mannerisms and snark. He guides the audience through the show and shares "previously unaired footage" from the TV special, which is naturally among the funniest and bawdiest bits. The thin as a negligee on a supermodel story flits through the outtakes, commentary, cameo star turns, and occasional song with gleeful abandon. And, although there are no listed age restrictions, a lot of the humor is risqué or caustically sharp in nature. I'm sure Vilanch would approve, but parents of children younger than 15 or so may not.

Jim Ousley and Ron Strawbridge, primarily as Han Solo and Lando Calrissian, anchor the storyline with an abundance of charisma. Whether winking and flirting with the crowd, delivering laughably cheesy dialogue, or seductively slinking across the stage in drag, the two are eminently watchable. Each member of the ensemble plays multiple roles and every one of them has several laugh out loud funny moments. Hunter Fredrick, Brie Howard, Amy Kelly, Rob McLemore, Shannon Nara, and Duncan Philips have some of the best supporting bits, and Tyson Blanquart is a strikingly good Art Carney. Nick Kelly, Scott McDonald, and Jason Puff capably and humorously round out the ensemble.

Though much of the audience and actors are far too young to have seen the special, 70s television is alive and thriving on a number of stations. The audience certainly seems to get it, and the impressions of the prior era stars are broad and funny enough to convey the character, personality and style parodied. As with most Magic Smoking Monkey productions, knowledge of the genre, and in this case the era, helps but is not necessary to enjoy watching genuinely talented actors poke a little fun.

Donna Northcott directs the show with an appropriately casual approach, ensuring the characters are well defined and the marks are hit, but otherwise awarding free reign. The company's original adaptations maintain a sense of comically controlled chaos, a commitment to farce and innuendo, and a healthy dose of pop culture references including other prominent entertainment franchises. In short, the show is a great choice for light, laughter filled entertainment with plenty of fresh references and skewering wit.

Magic Smoking Monkey Theatre, the quirky offshoot of St. Louis Shakespeare, celebrates the ridiculous and absurd in our culture. And, let's be honest, there's an abundance of material to choose from around the holidays. The Making of The Star Wars Holiday Special!, a "behind the scenes" look at the spectacular failure of the television special, running through December 10, 2016, is high-octane fun for the holidays.