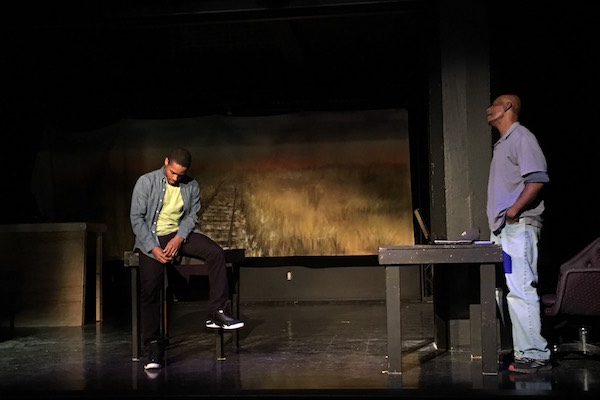 Tesseract Theatre's current production, artistic director Taylor Gruenloh's Adverse Effects walks through an emotional minefield as it seeks the truth behind a family's tragic loss. The engrossing show examines current medical and pharmaceutical practices regarding the study and approval of new drugs, and it's not always an easy play to watch. Luckily, a script that builds compassion and tension equally, with character-focused direction and solid performances, ensures a thoroughly engaging production.

The story centers on Phil and Jessica, a couple who tragically lost their only child, a daughter, to suicide. Both parents believe that a medication prescribed for allergies triggered her actions, but they are nearly destitute after spending all they had trying to prove their case. The relationship is strained, but there's genuine love and a commitment to get through this together between the two, and Carl Overly, Jr. and Musa Gurnis bring the pair compassionately to life.

Jessica's brother Richard, a believably unaware and easily swayed research scientist portrayed by Phil Leveling, helps the family when he can by giving them some of the money he earns when he agrees to add his name as co-author on a medical research study. The dubious documentation is actually authored by Alyssa, a comely writer working for a medical education company backed by the pharmaceutical industry, portrayed with appropriately shaky conviction by Julianne King. Unfortunately her boss, a manipulative and rationalizing Taleesha Caturah, views a lack of enforceable culpability as permission to engage in questionable practices.

Phil refuses to give up and finally convinces Maurice, a local reporter tired of covering high school sports, to take an interest in Phil's story even though his editor cautions against it. Though driven in part by boredom, the writer, in an intelligent performance by Maurice Walters II filled with curious energy, is doggedly inquisitive once convinced he's found a story. In the well-developed plot twist, the reporter's queries and desire to find the truth lead him to Richard. Maurice's story gets picked up and a real investigation is finally launched, leading his boss Ed, played with a gruff likeability by Don McClendon, to promote him--a positive secondary plot that, though clichéd, adds much needed lift to the story.

The show is deep and thought provoking, and director Brittanie Gunn serves the script well by focusing on character development and motivation. Gunn and her cast dive in, showing the many facets of their characters and responding with varied nuance and pain. Phil and Jessica are consumed with grief, and we see the full range of logic and emotion in which it is expressed. Richard has fallen hard for Alyssa and he naively allows himself to be all too easily led down a path he instinctively questions. Maurice is simply looking for a story he cares enough about to write.

There are, however, a few problems with the show. First, the script is very dense and not all audiences will want to commit to the journey, though the destination is quite emotionally satisfying and cathartic. Secondly, the show is comprised of multiple short scenes, particularly the first act, presenting a staging challenge. The multiple transitions slow the show at times and a few of the actors got off to a slow start that lingered. The second act completely redeems the first, however, as the action, conflict, and pace are effectively managed and executed.

Adverse Effects is an incredibly relevant story, and well researched, and you shouldn't let the medical theme or personal tragedy scare you away. At it's heart, this modern twist on a morality tale touches more deeply on love and the lengths we will go to trying to protect and honor those we love than it does science. Overly and Gurnis are effectively sympathetic and imperfect, and each finds numerous levels to express their emotion and frustration, while Walters, Leveling, King, Caturah, and McClendon provide convincing support.

Tesseract Theatre's Adverse Effects, running through December 11, focuses on contemporary issues in a thoughtful way. I wish the transitions between scenes could have been reduced through set design. However, each scene is necessary in setting up the powerful, and likely tear inducing, second act, which moves along perfectly and with increasing tension.