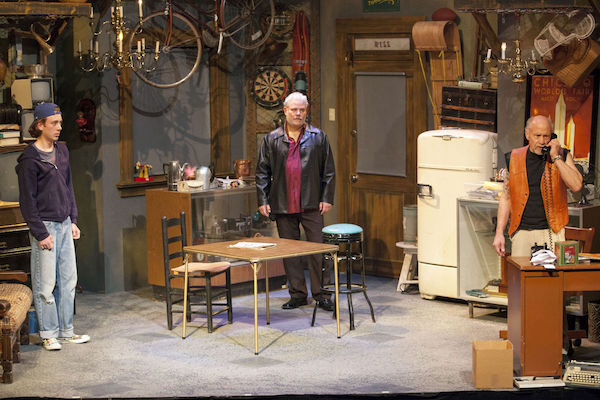 Bristling with aggressive energy, 'American Buffalo' is a powerful tale of fading hope and lost chances

Theatergoers looking for an alternative to holiday stories can't get much further away than Mamet, with his love for expletives and stories of downtrodden people living on the fringes of society and, sometimes, sanity. In many ways, his characters illustrate just how fragile the American dream is for millions of its citizens. American Buffalo at St. Louis Actors' Studio embraces this premise with a gritty, raw production that pushes all the right buttons. Though not entirely hopeless or bereft of light, the story is a dark tale of petty crime and life lived under the radar.

Donny is a perpetually down-on-his luck proprietor of a rundown resale shop and the host of a regular card games among his friends, including Teach, a small time thief and opportunist. Young Bobby is a hopelessly lost junkie, desperate to please Donny and be cut in on a heist. He struggles to keep his thoughts and actions clear, but has told Donny that their latest mark, a coin collector, has left with a suitcase, indicating the time for a robbery has arrived. When Teach learns of their plans, he wants to be cut in -- and to cut Bobby out. The friendship between the three is based more on mutual need than trust or likability, though Donny and Bobby clearly care deeply about each other and with good reason.

Though straightforward in its plot, the story is more character study than action, and director John Contini taps into the nervous energy until suspicions, petty squabbles, and distrust permeate the air. Teach presses Donny to get rid of Bobby and instead call on their poker buddy for assistance. Bobby initially tries to win Teach over, but is soon shirking away from the man's overbearing personality. Donny is irritable and irritated, particularly by the way Teach so easily manipulates him, though he can't quite articulate the thought. He also wants to get "his" American Buffalo nickel back, a pitfall of running a small time resale shop and not knowing the value of all the items he displays.

Peter Mayer, as Donny, is querulous and defensive, but always protective of Bobby. He fits his environment perfectly, with an unshaven, tattooed exterior and old biker clothes that mask the tenderness he feels towards Bobby and complement his gruff, defensive conversational style. The relationship between the two irritates Teach, and William Roth brings an intensity and ambition to the character that spills forth in biting comments and insinuations. He talks with the continuous patter of a con man, throwing out opinions as if they were fact and obfuscating challenges to his authority and intelligence with long rambling diatribes. As Bobby, Leo Ramsey shows both the character's nervous, drug-fueled energy as well as his vulnerability. Gaunt from addiction and jumpy by nature, Bobby becomes more agitated when Teach is in the room, though he often ends up skulking out. Ramsey finds meaning in all of Bobby's ticks and addled thoughts.

The characters are wrought from pain, hard work and little reward; and their stories and dreams for a big score are as heartbreaking as they are relevant. The show moves at a fast clip that makes the most of Mamet's deftly illogical logic and crisp, expletive-filled dialogue. The characters aren't particularly likable and their plans result in frustration more than release, but it's hard to take your eyes off them because you just know hell is going to break loose at some point. The tension starts building from Teach's entrance, doesn't let up, and is only partially resolved by the conclusion -- though this device feels entirely appropriate to the story.

John Contini directs this gut-wrenching show with a soundtrack straight from the mid-70s that fits the tone and energy of the show. The play's action is enhanced with fight choreography by Shaun Sheley and lighting by Dalton Robison that suggests a dim, gloomy room. The resale shop, an important element that's almost a character itself, is fabulously cluttered and interesting. Carla Landis Evans, as costumer and props design, along with set designer Cristie Johnson have outdone themselves, creating the rundown establishment bursting with junk.

But you'll forget all of that in just a few minutes as you're swept into the story and the intricate battles of wit, will, and false hope. American Buffalo is not a pretty story, but the performances are compelling, beautifully executed, and heartbreakingly real. The show, running through December 18, 2016 at St. Louis Actors' Studio, is laden with social sub-context and while it won't leave you humming holiday tunes, it is definitely powerfully effective theater.