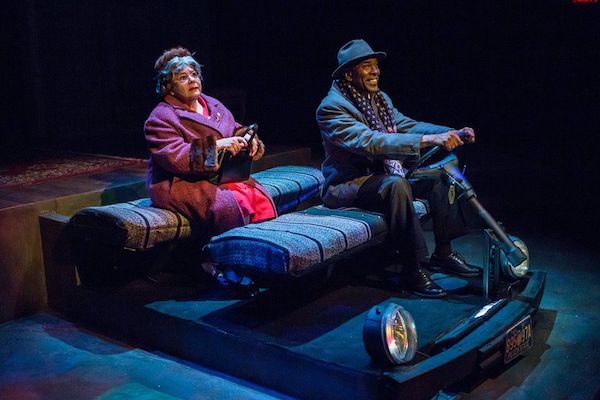 The New Jewish Theatre brings Alfred Uhry's gentle and lovely ode to aging and race relation to life in a thoroughly enjoyable production of Driving Miss Daisy that reminds us why the movie struck such a chord when first released. The show, which moves with languid fluidity, traces the 25-year relationship between an older white Jewish woman and her chauffeur, a slightly younger African-American man. Set in the period from 1948 to 1973, their relationship is a microcosmic view of the changes in American society as the Civil Rights movement gained steam and was passed into law.

Daisy Werthan, a comfortably well off widow of a certain age, has just wrecked her new car. As a result, her son, Boolie, and her insurance company determine she is no longer capable of driving. Understanding his mother's desire to socialize and move around independently, Boolie suggests hiring a chauffer. Daisy immediately bristles at the idea, but Boolie ignores her and hires Hoke Coleburn, an African American man in his late fifties.

Daisy rebuffs Hoke initially, saying she'll take the trolley to the store rather than waste money on a driver, but he flatters her into accepting his offer to drive. One might think that, considering the period and recent persecution of the Jewish people, Daisy would be less inclined towards prejudice. But she proves otherwise, initially showing distrust and slight distain to Hoke. Daisy seems oblivious to the harm her words and actions can do, and it's very satisfying to watch her attitude and behavior change as the play progresses. Hoke shows remarkable patience and forgiveness towards the older woman, eventually winning her over with his essential honesty and genuine likability.

The play's moral compass is firmly rooted in understanding and relationship building, an idea that's continually reinforced. Daisy and Hoke's back and forth continues over the years, mellowing into a valued friendship filled with increasing interest and affection. The time period of the show, critical to the theme and Uhry's nudging moral, is reflected in the actors changing ideas about trust, race, and society. The personal nature of the story, which is also reflected in Boolie's loving relationship with his mother and unquestioned respect for Hoke, is effectively employed to address the larger issue of societal racism without berating audience members.

Kathleen Sitzer is charmingly stubborn and warm, even when she's careless or rude, and she brings a zest for life to Daisy. Though her movements become slower and more difficult to execute as she ages, she retains her vibrant and curious personality from start to finish. J. Samuel Davis is kind, patient beyond words, and genuinely likable. He carries himself with dignity that commands, but never demands, respect and effectively counters Sitzer with a calm, cheerful demeanor prone to laughter. The exchanges between the two are pure fun to watch, and they play off each other in delightful ways. Laughter is more frequent, their postures relax, and they become freely affectionate as the show progresses. Eric Dean White is sympathetic and caring as Boolie, an almost thankless role that nonetheless adds important context to the story. Appropriately supportive, he nonetheless provides additional perspective and a voice of reason and progress, even when his mother fears he's losing his Jewish roots.

Director Sydnie Grosberg Ronga clearly knows the material well, and she ensures the actors find multiple emotional levels, an important touch to a show that is more dialogue and character than action. Dunsi Dai provides the set design and art, effectively using levels and smaller, quickly moved pieces to augment the fixed set. Lighting designer Mark Wilson does a nice job shifting focus; he somehow manages to make the rest of the set disappear when not needed. Costume designer Michele Friedman Siler, props master Meg Brinkley, sound designer Zoe Sullivan, and dialect coach Nancy Bell all contribute to the show, in part by keeping the focus on the story.

Much like the soft, southern accents employed by the actors, Driving Miss Daisy, in performance at the New Jewish Theatre through December 18, 2016, moves with a slow but constant fluidity. The difficulty of covering a span of 25 years is solved with small changes and additions that never disrupt the action or story. These touches help the audience enter Daisy and Hoke's world and embrace the sweet natured love of their deep friendship. We are invited along for the ride as race, age, religion, and class melt into the past and we're left with two near inseparable companions sharing one last visit.